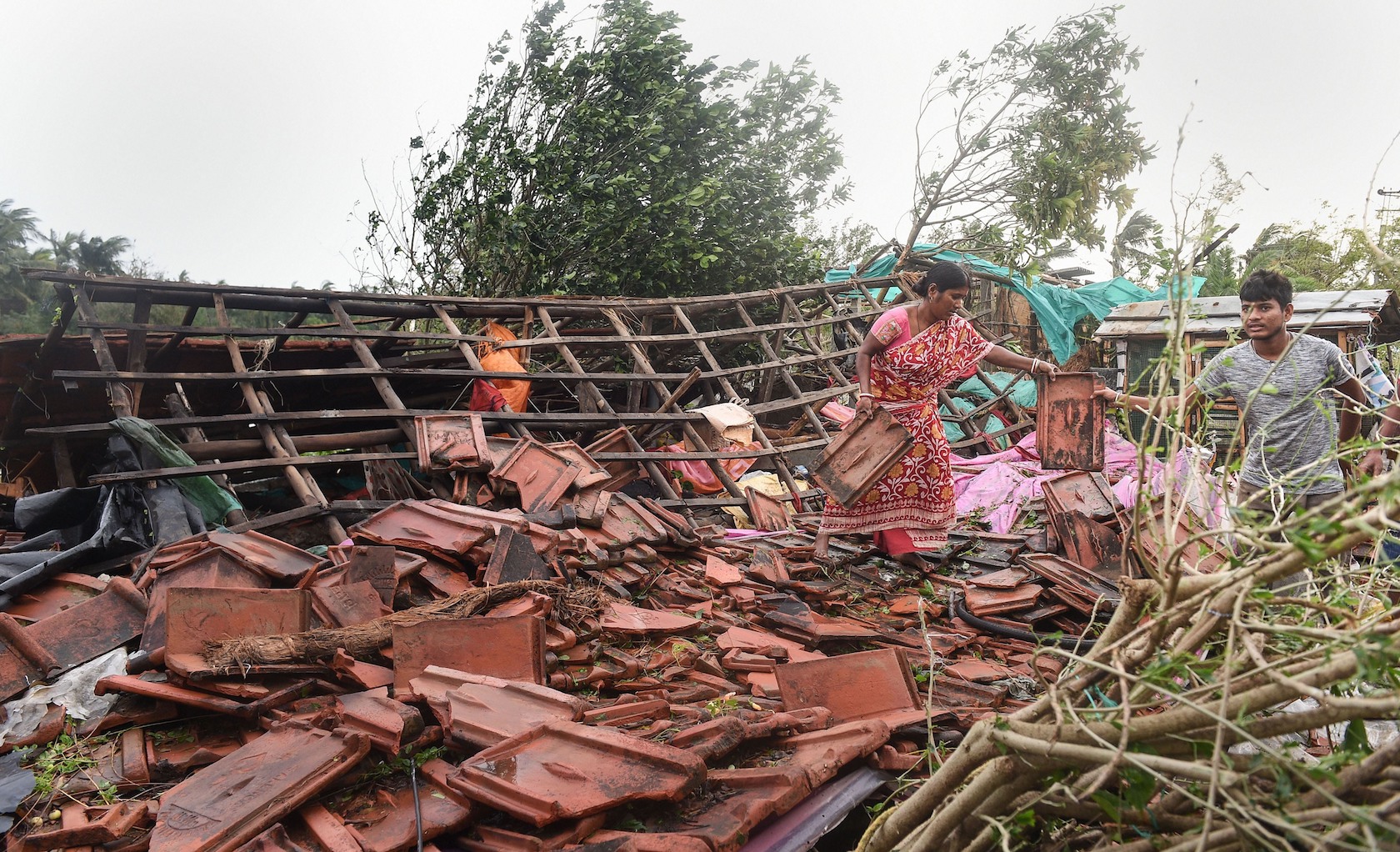 Cyclone 'Bulbul', which made landfall between the Bengal and Bangladesh coasts, brought in its wake heavy rain coupled with strong winds till early Sunday, affecting normal life in several parts of the city and the coastal districts of the state.

At least seven people were killed in rain-related incidents in several parts of the state, according to official reports.

An employee of a city club was killed when a branch of a cedar tree fell on him, police said.

According to a senior police officer, Suchitra Mandal (70) died at Purba Makala village in the district when a tree fell on her.

Similarly, at Gokhna village, several tress were uprooted, one of which claimed the life of Reba Biswas (47).

Manirul Gazi (59) was the third casualty in the district. He was electrocuted to death after coming in contact with a lamp post, the officer added.

Two more deaths, one due to a wall collapse and another due to a falling tree, were also reported in the district, a state government official said.

In East Midnapore, a man died after he was crushed by a falling tree.

Torrential rain lashed the metropolis throughout Saturday, forcing people to remain indoors. Gale wind with gusts up to 135 kmph prevailed over the coastal districts of South 24 Parganas and East Midnapore and its adjoining areas in North 24 Parganas as the cyclone made landfall around midnight on Saturday.

Hundreds of uprooted trees blocked roads in parts of the city, even as people braved the weather and came out of their homes on Sunday.

The National Disaster Response Force, along with the Kolkata Municipal Corporation (KMC), and police and fire personnel, is working on a war footing to clear road blockades caused by fallen trees and branches.

'We have already engaged workers to clear the roads and pump out water from low-lying areas. We are hopeful our work will be over by tonight,' said a KMC official.

State disaster management minister Javed Khan said all emergency services have been put in place to ensure uprooted trees are removed at the earliest.

'Yesterday's very severe cyclonic storm 'Bulbul' over northwest Bay of Bengal (BoB) moved northeastwards, weakened into a severe cyclonic storm and crossed West Bengal coast close to Sunderban Dhanchi forest during 8.30 to 11.30 pm with a maximum sustained wind speed of 110-120 kmph gusting to 135 kmph,' it said in an official release.

The Met department also predicted light to moderate rainfall over the next six hours from 12.30 pm in North and South 24 Parganas, East Midnapore and Nadia districts.

In a tweet, Chief Minister Mamata Banerjee said she would conduct an aerial survey of the affected areas around Namkhana and Bakkhali in South 24 Parganas.

'Due to the severe cyclonic storm 'Bulbul', I have decided to postpone my North Bengal visit in the coming week.

Instead, tomorrow I would take an aerial survey of the affected areas around Namkhana and Bakkhali.

State power minister Sovandeb Chattopadhyay said measures were being taken to restore power supply in areas, where electric cables have been torn apart due to the cyclone.

Earlier in the day, Prime Minister Narendra Modi spoke with West Bengal Chief Minister Mamata Banerjee about the situation arising out of the cylone and assured the state of all assistance to deal with the calamity.

'Reviewed the situation in the wake of cyclone conditions and heavy rain in parts of Eastern India,' the prime minister wrote on Twitter.