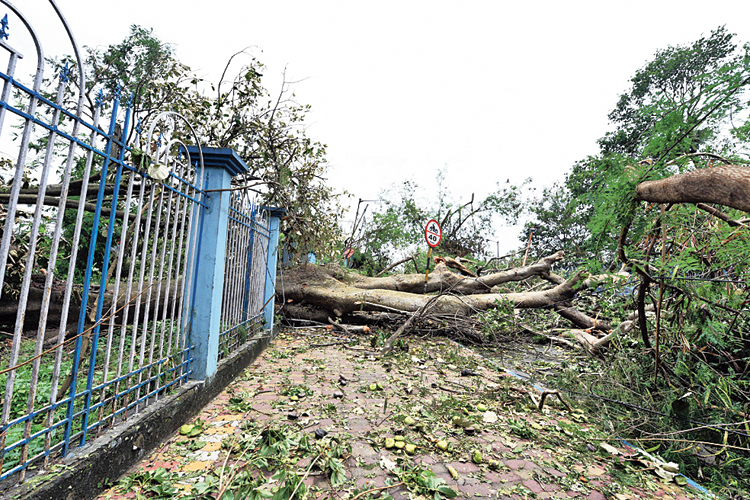 Keep the focus on clearing routes to reach the pain point and do not get swayed by VIP calls.

This is the advice being offered by veterans to the power utilities of Bengal and Calcutta as they struggle to cope with the aftermath of Cyclone Amphan.

These veterans -- senior government officials and power utility executives -- had witnessed the destruction Aila had wreaked in Bengal 11 years ago.

For a city like Calcutta, where 70 per cent of the electricity distribution lines is underground, power should have been back to normal within 24 hours, the government official said. For the rest of the areas, where electricity is carried by overhead lines, it should not take more than two to three days, a retired bureaucrat said.

'You have to be very clear what needs to be restored first. They have to be the critical infrastructure linked to hospitals, water supply and drainage system, followed by the rest. There has to be a clear route map on how to reach the pain point where the line has snapped,' said a retired official who manned a key post during Aila.

'I have often seen that tree cutters are not deployed in the area where they should be. VIPs, eager to show off their influence and connections, call in those who are involved in the tree-cutting process to clear their neighbourhood, and thereby slow down the more critical restoration,' the retired bureaucrat said.

Many of the veterans cited the example of Florida, the US state frequently at the receiving end of hurricanes.

Florida Power & Light, which supplies electricity in the state, has clearly listed the priority areas for restoring power. Neither status of the customer nor the location is expected to be a factor in restoration, which is intended to focus on the largest number of customers in the shortest time. The smaller groups are taken up at a later stage.

The web page of Florida Power also fields candid questions such as 'why is power restored to everyone in my neighbourhood except me?' and 'what does it mean if power is on across the street?'

During Aila, 90 per cent of the affected areas got back electricity within a week. The scale of destruction in Calcutta was lower than that during Amphan but over 1,000 trees had fallen then. 'We had to use axes to cut trees to repair power lines. There were no electric saws like today. It is imperative to have close coordination with the administration,' a power executive said.

'The entire team should be on the same page. Have to have close co-ordination with the administration. This is common sense, not rocket science,' the retired official pointed out.

A CESC official claimed the core Calcutta operation with underground network had remained largely unaffected despite the unprecedented storm but complaints have poured in from the outer peripheries of the city such as Budge Budge, Panchashayar, Garia, Serampore and Baguihati.

But till Friday night, several houses in Lake Gardens had no power. 'There is a CESC godown very close to my house. I have been complaining about the loss of power to the CESC helpline for the past two days. A group from the CESC said that only after a fallen tree is removed could power be restored. The tree was removed on Friday around 2pm. But we do not have power even now at 10pm on Friday,' said a Lake Gardens resident.

The company provides electricity to 33 lakh consumers in the city. It did not say how many consumers are facing an outage now.

'The percentage (of those affected) is minuscule, but to each customer who is facing outage, such a number makes no sense. Unless we bring electricity back to their homes, they will not be satisfied. The CESC is tirelessly working towards that despite challenges of social distancing requirements because of Covid-19,' a company official said.

The official said the CESC could handle small trees or branches on its own but for bigger ones, the help of the administration was needed.