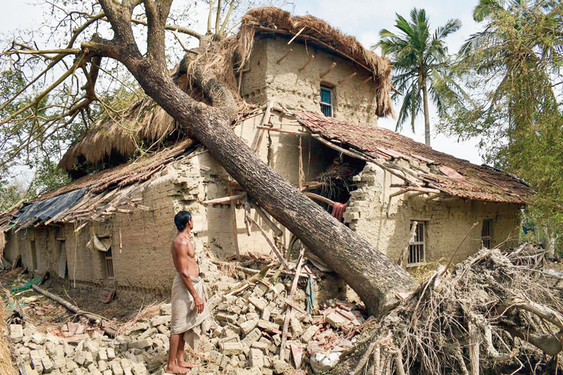 The Trinamul Congress is making desperate attempts to contain the resentment of people over distribution Amphan compensation by cracking down on “perpetrators of corruption” within the party.

But the efforts are often getting undone with some panchayat-level leaders allegedly taking to violent ways to resist the wrath of villagers.

The Trinamul leadership in East Midnapore’s Nandigram has taken disciplinary action against several party leaders involved in malpractices. But at Dulduli-Kothabari near Hingalganj in North 24-Parganas, a panchayat member of the ruling party and his associates allegedly attacked protesting villagers with sharp-edged weapons.

Eight persons were injured in the attack.

Trinamul sacked Mansura Begum, the pradhan of Kendamari panchayat in East Midnapore, on Tuesday afternoon over allegations of fraud related to the Amphan aid delivery. Mansura was one of 25 Trinamul leaders and workers in Nandigram against whom disciplinary action was taken on Tuesday.

Mansura has since resigned as the pradhan.

Mansura, a resident of Hossainpur in Kendamari, had been facing allegations of fraud and nepotism in the distribution of Rs 20,000 each for those affected by the cyclone.

“The charges against her were proved when the person whose number she had used to perpetrate irregularities visited the block office. It turned out that Mansura had used the person’s number to disburse aid to her mother, Rumeshan Biwi, who lives around 10km away at Gadaibalbar village in Nandigram panchayat,” said a block official.

Asked, Mansura said she had been falsely implicated.

“There is a campaign to besmirch my image by my detractors. I did not put my mother’s name and have already instructed her to return the money,” she said.

Asked why Mansura’s mother’s name did not come up during verification, BDO Subrata Mullick declined comments.

“The government must take legal action against the accused. If that doesn’t happen, we will organise massive protests,” said CPM district secretary Niranjan Sihi.

Trinamul’s effort to crack the whip on the corrupt and the attempt for an image makeover tripped at Dulduli-Kothabari on Monday night with panchayat member Mamata Munda Sardar and her associates allegedly attacking villagers who had gone to her house to ask about corruption involving Amphan compensation.

Sources said an angry Mamata, her husband Ashutosh and some of their close aides had attacked the villagers with sharp weapons.

Police rescued the eight injured persons, who were later admitted to Basirhat district hospital. Sources said the condition of Bimal Mandal and Ramen Gayen was critical.

One of the villagers, who had gone to the Sardar’s house, said: “Our homes had been devastated. We wanted to know why we didn’t get compensation while those whose houses had not been damaged received the dole. Without answering our queries, the panchayat member, her husband and their aides abused us and then tried to kill us with sharp-edged weapons.”

Denying the allegations, Sardar said: “I repeatedly tried to pacify the villagers, assuring them that compensation would soon be credited to their bank accounts. But they threatened us.”

Trinamul’s North 24-Parganas district executive president Narayan Goswami said: “The BJP, CPM and the Congress are attacking our panchayat officials with false allegations and this is leading to tension.”