Cup sets standard for our stadiums

The World Cup in Russia is being hailed as the best organised World Cup in recent times. Metro spoke to three veteran visitors to international football tournaments who are also regulars at the Salt Lake stadium or the Eden Gardens galleries to seek their feedback on the facilities in stadiums across Russia and the lessons we can learn from them. 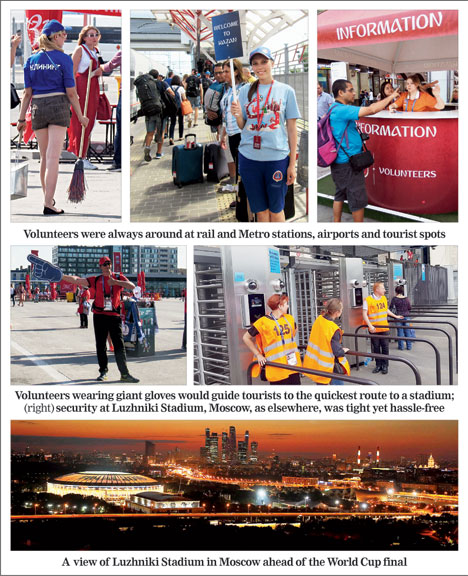 The World Cup in Russia is being hailed as the best organised World Cup in recent times. Metro spoke to three veteran visitors to international football tournaments who are also regulars at the Salt Lake stadium or the Eden Gardens galleries to seek their feedback on the facilities in stadiums across Russia and the lessons we can learn from them.

About 1,000 extra policemen were deployed in Moscow alone for the tournament. Once a match got over, they stood on both flanks of the passages to ensure the wave of spectators did not take any route other than that intended. "Imagine two rows of policemen standing on either side of the road from the Eden Gardens to Esplanade Metro station. There is no way you can take a wrong turn or start a brawl with supporters of the rival team," said Col (retd) Basudev Mitra, a New Town resident who had gone for the two semi-finals.

The Fan ID issued to each ticket-holder was a game-changer. "This is possibly the first World Cup where they could identify each spectator inside the stadium," said Rana Safui, a city businessman on his fourth World Cup trip. "Without a Fan ID, you could not go in even if you had a match ticket. There were two layers of checks - by the police and then by volunteers who first scanned the Fan ID. Only if the machine accepted the card was one asked for the ticket," a resident of the Anwar Shah Road connector said.

Closed-circuit cameras were everywhere inside the stadium. "Once you stepped outside the stadium but within the complex in the open air, they created a kind of a command centre in parked vehicles from which the cameras kept a watch on you," Mitra said.

The number of uniformed volunteers was countless. "You never felt unsafe," said Mitra. "The volunteers were everywhere - at rail stations, Metro stations, airports, areas of tourist interest..." Sourabh Datta Gupta of Triangular Park added: "Can you imagine volunteers being stationed at both ends of Sudder Street at night during a big sports tournament?"

These English-speaking volunteers were life savers in a country with little else but Russian on its lips. "I loved the over-sized gloves they wore, with the index finger pointing. One could make out from afar which way to turn without having to go up and ask," said Datta Gupta, on his second World Cup visit.

He was also impressed by their flexibility. Water bottles were not allowed inside, like in Calcutta stadiums, and were very costly to buy inside. Usually abroad at such facilities, there are taps from which one drinks water directly. "But I have spondylitis which makes it difficult for me to bend. So I always carry a small water bottle. The police were puzzled as they could not understand me but let me carry on to the next point where volunteers were doing the checking. The moment I told a volunteer she immediately let me pass, no questions asked. I can't imagine the police back home being that considerate," Datta Gupta said.

"An ambulance was parked next to a medical tent at every exit. They also had paramedics with medical kits in rucksacks at every level," recalled Mitra.

The door of a toilet had got jammed for a while with Datta Gupta inside. Once he got out, he realised his hand was black and blue from banging on the door. "When I showed my hand to a volunteer, he immediately called a medical attendant. He sprayed a pain-killer on my hand, tied it with a gauze and took a picture of my Fan ID - all within seconds. I did not have to go anywhere," the 47-year-old said.

The Fan ID allowed people to travel free in public transport on match days. "Metro, bus - everything was free for the stadium-bound," Datta Gupta said. The trolley buses, with overhead pantographs, drawing electricity from wires and running on wheels, announced the name of the next station in English.

In most places, the Metro was barely 600-700m away from the stadium. "Only in Saransk, the smallest town among the venues, there was no Metro and we had no walk a lot from the rail station on the pedestrians-only streets," said Datta Gupta.

The high-speed trains raised eyebrows. "I took a bullet train at 11am from St Petersburg after the first semi-final. I reached Moscow, 714km away, at 2.45pm. The match was at 9pm," said Safui.

From the stadium gate, it took 10-15 minutes to reach one's seat. "There were elevators everywhere for the infirm. The St Petersburg stadium had escalators till the seventh level at the top," said Safui. At both Eden and Salt Lake, the single elevator in the VIP enclave caters only to officials and celebrities.

Spectators at the Under-17 World Cup had faced problems as no luggage was allowed into Salt Lake stadium. Neither was any facility offered for storage. In Russia, the situation was different.

"You could carry in any luggage the dimensions of which added up to not more than 75cm," said Mitra.

Datta Gupta, whose hectic schedule often meant going from a station straight to a match, had to look for options. "Initially I was keeping my luggage at the 'left luggage' facility adjacent to the rail station. FIFA had made them free. From my Kazan match onwards, I discovered that even the stadiums had that facility for restricted items," said Datta Gupta.

He carried in his umbrella and raincoat. Umbrellas, too, were frowned upon at the Under-17 World Cup here.

Camera, unlike in Calcutta stadiums, is not on the restricted items list. "The customer in Russia was treated as king," Mitra pointed out.