The PWD Cell of the Siliguri Municipal Corporation has started a drive against illegal constructions across the town and demolished seven unauthorised buildings in the past one month. 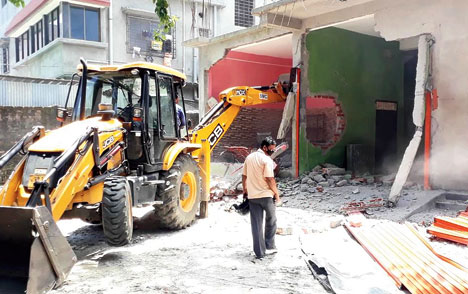 Siliguri: The PWD Cell of the Siliguri Municipal Corporation has started a drive against illegal constructions across the town and demolished seven unauthorised buildings in the past one month.

SMC sources said all the illegal structures were residential properties and despite serving several notices on the owners, they did not respond and submit necessary documents. This made the civic department launch the drive.

Nurul Islam, the member, mayor-in-council (PWD) at the SMC, said the civic body had identified about 27 such unauthorised structures across the civic area, all of which will be demolished soon.

"The civic employees, with the help of police, dismantled an unauthorised residential building at Ganganagar in ward five on Friday. The building owner was served three back-to-back notices but he did not respond and could not show our officials necessary documents to prove that the building has been constructed in legal manner. Later, we demolished the single-storied building," said Islam.

SMC sources said ever since the Left Front had formed the board in the SMC in 2015, they had to face the allegation of the Trinamul-led opposition that the board has failed to prevent mushrooming of illegal buildings across the town.

Such allegations have finally prompted the board to initiate the drive against unauthorised buildings.

"There are more such structures we have identified and notices have been served to the owners. If they fail to submit necessary documents within stipulated period, similar steps will be taken," he added.

The civic board, he said, is also preparing a list of buildings where garages of residential apartments have been put for commercial use. The list of such offenders would be ready soon and the owners of such apartments concerned will have to face legal action.

"We will also find out how people who are running shops and other commercial facilities in garage spaces have managed to get trade licence from the SMC. All such facilities would be closed and all those concerned will be penalised. They might even face other legal steps," said Islam.