Don't insult mandate of 2021 by voting for an ex-BJP candidate who gained notoriety in Asansol, says Dipankar Bhattacharya 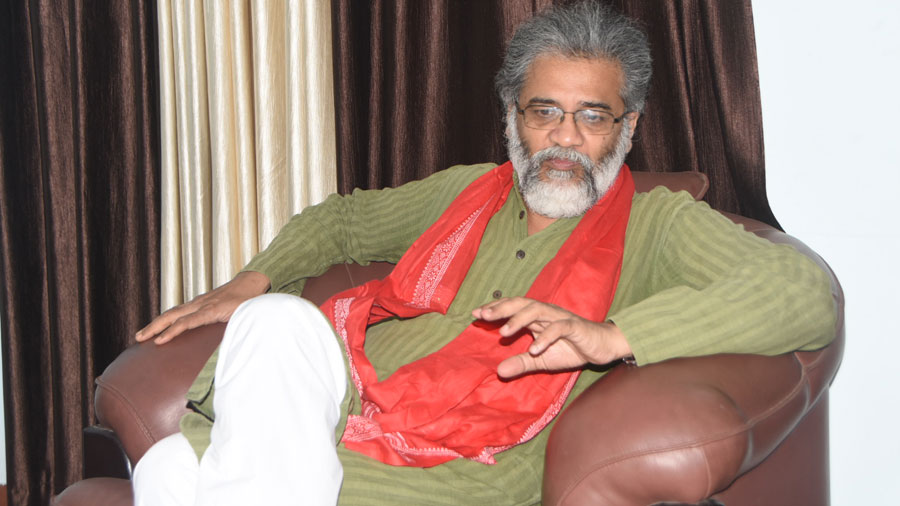 Mamata Banerjee’s open-door policy for leaders from other parties eager to step into the Trinamul fold may have cost her a few friends who had backed the Trinamul Congress almost unconditionally during two decades of its existence.

On Monday,  CPI ML (Liberation) general secretary Dipankar Bhattacharya spoke not so much in favour of the Left Front’s nominee as much as voicing opposition to the Trinamul nominee, the former BJP MP from Asansol, Babul Supriyo, as he asked Ballygunge voters not to allow the Trinamul to insult the mandate of 2021.

The ideological differences between the CPM and the CPI ML (Liberation) have been quite pronounced over the decades, and more often the two have been found to be on opposite sides of the political fence. One of the major points of difference between the two parties was over the Trinamul Congress and that was evident in last year’s Bengal Assembly polls, where the Liberation, which contested 12 seats, did not equate the Trinamul Congress with the BJP.

On the other hand, the CPM which went into a seat-sharing arrangement with the Congress and the Indian Secular Front, had marked both the BJP and the Trinamul as political enemies.

“The bypolls for Ballygunge constituency is not just to fill the vacancy created by the death of long-standing local MLA Subrata Mukherjee. It is to assert the dignity of every voter who voted against the BJP in the Assembly poll. Don’t let TMC insult the May’21 mandate,” tweeted Bhattacharya on Monday afternoon.

“For friends who may not be following Bengal politics that closely, the Trinamul candidate for the Ballygunge bypoll is none other than the former BJP leader Babul Supriyo who earned considerable notoriety during his years in the BJP. He lost as BJP candidate from Tollygunge in 2021,” reminded Bhattacharya.

The notoriety reference made by the Liberation general secretary was to the 2018 riots in Asansol, following which the Mamata Banerjee government had banned Supriyo from entering the industrial town, which will also go to polls on April 12 to elect a new MP in the seat vacated by Supriyo.

Despite its multi-breakaway factions, the Liberation in Bengal has largely opposed the Left Front during its 34 years uninterrupted rule. It had once advocated Trinamul as better than CPM, and opposed the land acquisition drive for industrialisation, riding on which Mamata first came to power in 2011.

However, in the last one year, the Liberation appears to have changed its stand on Mamata and appears to hold the ruling Trinamul to account in the mouthpiece Deshabrati on issues like the murder of Anis Khan, suicide of Burdwan’s Tuhina Khatun, alleged excesses committed by the Trinamul workers during last month’s civic polls and police atrocities.

“We appreciate the standpoint of Dipankar Bhattacharya and wish to reciprocate his support for Ballygunge LF candidate Saira Shah Halim,” tweeted Mohammad Saim, the new Bengal CPM state secretary. “We hope and desire to collectively take on the BJP and the turncoat TMC. Looking forward to march together to save our country and our people.”

In the 2021 Assembly elections, the late Mukherjee had polled around 71 per cent of the votes in multi-lingual, multi-ethnic Ballygunge, with a huge minority population. The ticket to Supriyo who filed his nomination on Monday has not gone down well with a section of Muslim clerics in Calcutta as well. The BJP had bagged the second position with 21 per cent, while CPM finished a poor third with just six per cent.

CPM insiders admit the fight will need more than mere optics like Bhattacharya’s opposition to Supriyo as the nominee.

“This also means that if the Trinamul had nominated anyone else, they (Liberation) would not have opposed. We have always insisted that the Trinamul was propped by the RSS against the CPM,” said a CPM leader. "Ballygunge is an uphill task."