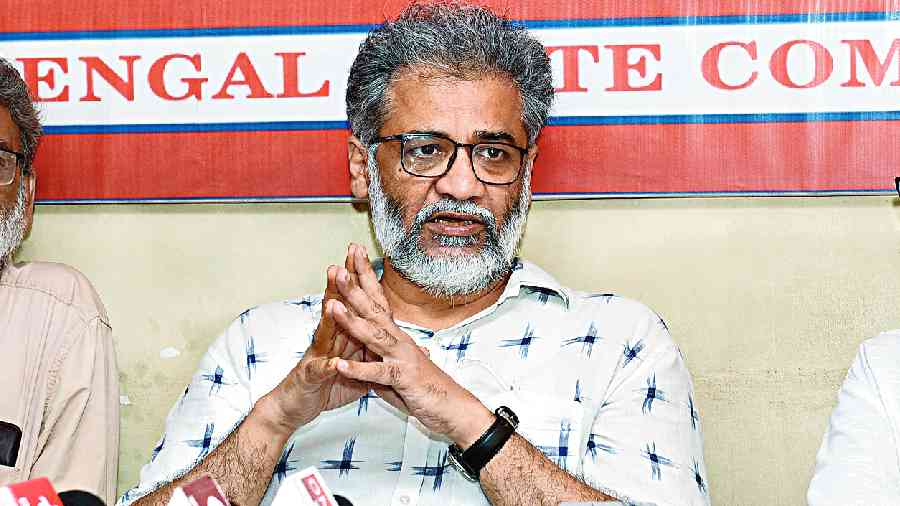 Dipankar Bhattacharya, the CPI-ML (Liberation) national general secretary known for backing Mamata Banerjee in the run-up to the Assembly polls in Bengal in 2021, said on Wednesday that the Trinamul Congress’s stand on the Vice-President election had “weakened the picture of Bengal’s politics of resistance”.

Bhattacharya also expressed concern over the state government’s alleged oppression of mass movements in Bengal, which goes against the spirit of campaigns like “No Vote to BJP” that played a role in securing an enhanced mandate for Mamata.

“There is a big need for the widest possible alliance of Opposition forces. We keep saying this repeatedly. That keeps being built and then it falls apart,” said Bhattacharya.

“You saw how for the presidential election, the way Mamata Banerjee called for a meeting herself, a wide alliance of Opposition forces was more or less put together, dialogues took place, a common candidate (Yashwant Sinha) was fielded. But when we reached the stage of the vice-presidential election, I do not know why it did not materialise,” he added.

“Who spoke to whom, who called whom, these questions were raised... and they did this,” Bhattacharya said on Trinamul’s decision on the vice-presidential election.

Bhattacharya laid stress on the need for the consolidation of maximum possible non-BJP players across the country to take on the “24x7 saffron election machinery” ahead of 2024.

“The widest possible alliance of Opposition forces must be formed, and it must also be made more acceptable to the people. Just the arithmetic of 10-20 parties coming together will not do,” he said.

“The people’s aspirations and the ongoing movements of the masses, their energy is much more intense, compared to many of the Opposition parties. Many of them (the Opposition parties) are there today, but gone tomorrow. But the spirit of the farmers’ movement, for instance, or the movement by students and youths by the Gandhi statue here, or the Shaheen Bagh movement against the citizenship matrix... that energy, dynamism and spirit need to be infused into the Opposition alliance. We cannot see that now,” he added.

“We need the widest possible alliance, with a bare minimum ideological basis, such as our democracy in peril... besides greater acceptability to the masses. Bengal, like Bihar, is a great place for work towards that.”

Bhattacharya expressed the hope that the developments in Bihar would have an impact on the entire Hindi-speaking belt and in national politics.

“The way attempts are on to attack, corner, weaken the Opposition, fell non-BJP state governments... there, Bihar has put up some resistance. That resistance will send out a message to the entire national Opposition. With that message, armed with more determination, the Opposition camp across India will see a restructuring, is what we hope,” he said.

“The significance of movements, across the nation, has increased exponentially than ever in the recent past. There must be better coordination between (non-BJP) governments and the movements on the streets. I have to say this with sadness that it is not happening in Bengal,” he said.

“In Bengal, the elections had turned into a mass movement last year, with things like “No Vote to BJP” playing a role. Aided by the movements, Mamata Banerjee secured a third term with an enhanced mandate. But after coming to power here... the state government has been neglecting the agenda, the voice of the movements. It has been resorting to oppression, suppression, framing in fabricated cases,” he added. “This goes against the role of Bengal in the Opposition movements in national politics.”

Bhattacharya brought up the recent interventions by Calcutta High Court in connection with the teacher recruitment case.

“In Bengal, we saw how the relevance of these movements had increased. If we take a look at Bengal, we must laud the consistent movement by students and youths against corruption in recruitments, which has lasted for over 500 days now. The movement that resulted in the matter reaching the judiciary, and from there an order was secured. The credit for that goes to the movements,” he said.