The relaxations for eateries and shops could come in a couple of days while those for malls would have to wait till after June 15, when the current spell of stricter restrictions ends 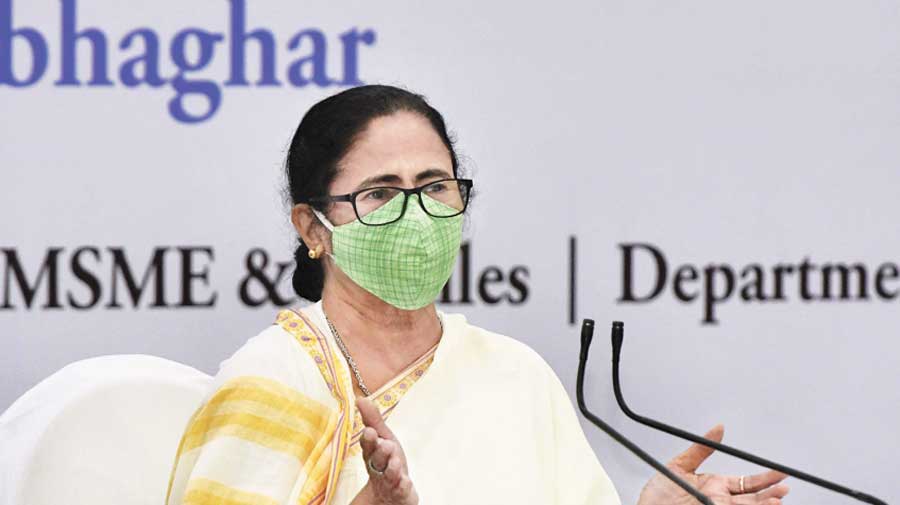 Mamata Banerjee on Thursday said her government would relax a few more Covid restrictions, offering an evening window for restaurants and an extra hour for shops in the afternoon, and consider a proposal to allow malls to open with limits on footfall.

Sources in Nabanna said the relaxations for eateries and shops could come in a couple of days while those for malls would have to wait till after June 15, when the current spell of stricter restrictions ends.

The state government, which has earmarked shop owners, transport workers and hawkers as “potential super spreaders” and is prioritising their vaccination with doses bought from the manufacturers, now plans to widen the category to include weavers, rice mill workers, ration shop workers and domestic workers.

“Eateries and restaurants can remain open between 5pm and 8pm provided the employees are vaccinated. Retail shops can operate between noon and 4pm,” the chief minister said at a meeting with representatives of business chambers and trade bodies.

Currently, retail outlets can operate between noon and 3pm, while grocery stores and vegetable shops can stay open between 7am and 10am.

The Nabanna meeting, which senior officials and business representatives from across the state joined virtually, had been called to discuss what the trade bodies can do to help Bengal’s battle against Covid and its post-Yaas relief and rehabilitation efforts.

During the one-hour, 45-minute meeting, the delegates convinced the chief minister about the need for more relaxations for the sake of livelihoods.

“I have never favoured a total lockdown and that’s why we have given so many widows of opportunities for business to run. But nor can I see people dying,” Mamata said, underscoring the need to balance the rights of life and livelihood.

During the meeting with 50-odd chambers of commerce, including bodies from the districts, the chief minister asked these organisations’ members to take the initiative to have their employees vaccinated.

“We don’t want to close trade and business. But in the middle of a pandemic, some steps need to be taken. I urge you to ensure that all your employees get vaccinated,” she said.

Initially at the meeting, Mamata had asked the trade bodies to get the vaccines on their own — which employers can do through an arrangement with private hospitals — and said the state would provide the vaccination facilities.

But chief secretary H.K. Dwivedi suggested that the state provide the vaccines to the labourers and workers of the various trade sectors by bringing them under the “potential super-spreader” category.

Mamata accepted the proposal and set up a committee headed by the chief secretary to oversee the matter. The district authorities have been asked to prepare databases of workers from various sectors and send these to Dwivedi.

Government sources said Mamata’s stress on the vaccination of employees was timely.

“The chief minister believes the state should be prepared to counter the (possible) third wave. If employees of all these establishments get vaccinated soon, the state can easily avoid the third wave,” a source said.

Another official said: “A total of 18 lakh shop owners, transport workers and hawkers have already been vaccinated. They get in touch with many people every day and can spread the virus rapidly if infected.”

Officials said Mamata’s decision to allow some relaxations stemmed from the significant fall in daily infections since the enforcement of stricter restrictions from May 16.

“When the stricter restrictions were put in place, the state’s daily count of positive cases was around 21,000. It has now fallen to 8,000-odd,” health secretary N.S. Nigam said.