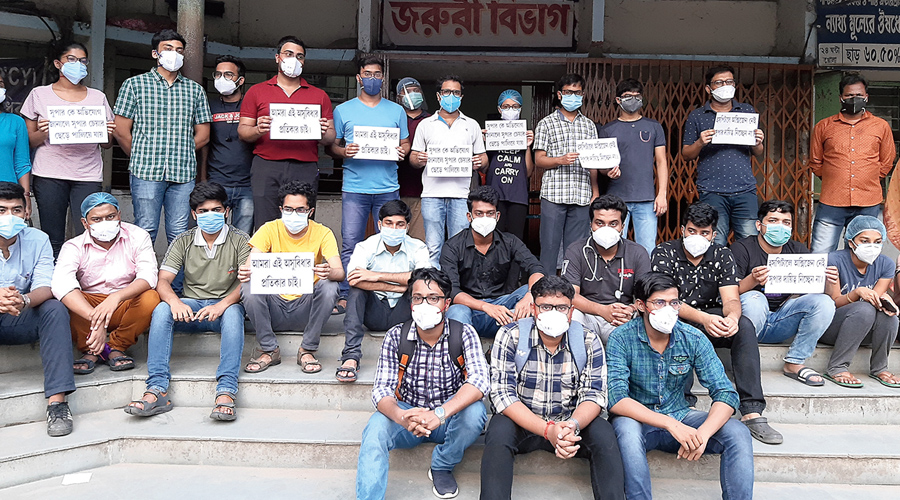 Interns attached to the Kalyani-based College of Medicine & JNM Hospital staged a demonstration, accusing the authorities of negligence after oxygen cylinders at the 1,000-bed healthcare facility ran out of stock, triggering panic among patients and their relatives.

The interns alleged that oxygen at the hospital ran out around 12 noon on Thursday, but the authorities did not bother to ensure its arrangement to meet the emergency requirement where 80 per cent patients had been admitted with breathing troubles.

Sources said the Domjur-based supplier of oxygen cylinders had failed to provide oxygen in the past three days because of the ongoing crisis. Nevertheless, the hospital authority did not make any temporary arrangement of oxygen, the doctors alleged.

On Thursday evening, the supplier agreed to send a consignment that was expected to reach the hospital around midnight.

“There is a crisis of oxygen across the country. But it is unimaginable that a medical college has no stock of oxygen and the medical superintendent did not take action despite our repeated appeals. We have been told cylinders would be coming late at night. That means the patients will remain without oxygen for about 12 hours and who will take the responsibility if anything untoward happens,” an intern said.

Medical superintendent of the hospital Avijit Mukherjee said: “There is a crisis everywhere...I have been trying my best to ensure supply by late night.”

Amid such a crisis, the state government in an attempt to reduce the burden of non-availability of oxygen, the south Bengal districts have on war footing began setting up oxygen plants at state government run hospitals. The National Highways Authorities of India (NHAI) and the state Public Health Engineering (PHE) department have been approached to set up the required infrastructure at the earliest considering the crisis of oxygen in view of the rise in the number of Covid cases.

State government had announced earlier this week that 55 oxygen plants would be set up at several government hospitals. The government also said the gas would be produced and directly supplied to the wards through pipe lines.

Under this endeavour, many hospitals in south Bengal have begun the installation of the plants.

In Nadia till Thursday, the district administration has decided to install four such plants, which will come up at Kalyani-based JNM Hospital and the Netaji Subhas Sanatorium & Tuberculosis Hospital, Nadia district hospital in Krishnagar as well as the Tehatta subdivisional hospital.

“Once the infrastructure is prepared, the Defence Research Development Organisation will take up the job of launching the production plant at all the four hospitals. This will reduce the dependence on oxygen cylinders,” a senior official of Nadia administration said

In Murshidabad, construction of an oxygen plant at the Behrampore Covid hospital has been completed by the NHAI. Chief medical officer (health) Prasanta Biswas said: “The pipeline laying works has been completed. The work of installing the plants is awaited.”

Sources at the district administration said similar plants had been proposed for all subdivisional hospitals at Jangipur, Sagardighi, Domkal and Lalgola.

Bankura district has also been facing acute shortage of oxygen. District magistrate K. Radhika Aiyar said: “We have sent proposals for at least four plants in the districts to overcome the crisis.”

Despite a shortage, the East Midnapore administration is yet to prepare a proposal for setting up an oxygen plant because of repeated transfer and posting of senior officials by the Election Commission in the district.