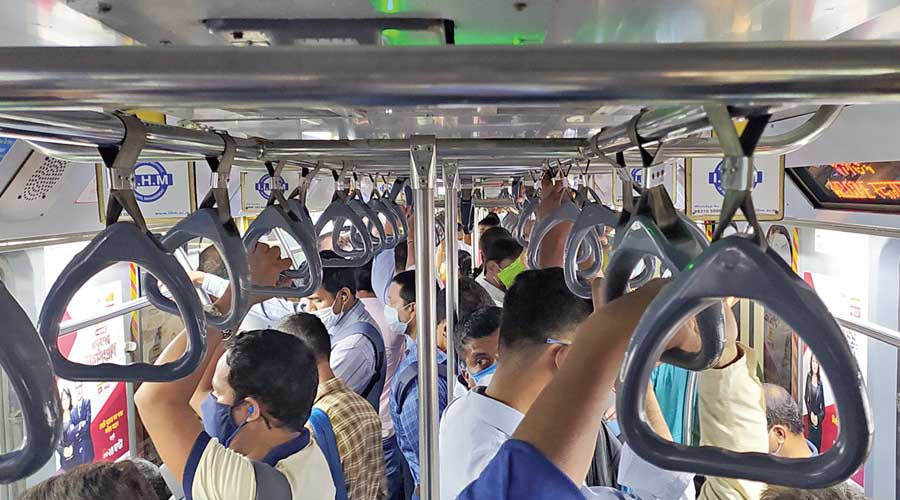 Commuters were seen travelling in crowded local trains on Monday, thumbing their noses to the restrictions imposed by the state government a day ago to curb the spread of COVID-19.

Metro Railway coaches also ran almost jam-packed in the peak hours, with people barely maintaining distance from one another.

The Bengal government, in an order issued on Sunday, capped the number of passengers in local trains to 50 per cent of the seating capacity. It has also limited the hours of service to 7 pm.

Metro Railway has made smart cards mandatory for passengers to avail its services, discontinuing token issuance.

The new set of rules will be applicable till January 15.

Suburban trains were choc-a-bloc with passengers in the busy Sealdah and Howrah divisions of Eastern Railway during the day as some of them pushed each other to make their way inside the coaches.

In the Kharagpur Division of South Eastern Railway, too, the situation was no different.

Eastern Railway spokesperson Ekalabya Chakraborti said suburban trains will leave the station of origin from 5 am to 7 pm as per the existing timetable.

Other mail, express, long-distance passenger trains, parcel and freight services would run according to the usual schedule, he told reporters.

Wearing masks in trains has been made mandatory, and railway authorities are making time-to-time announcements to generate passenger awareness on COVID-19 protocols, he added.

Some passengers from Calcutta's neighbourhood expressed concern over the restrictions in place, stating that it would be difficult for them to return home in the evening owing to the curtailed service hours.

"With my work hours extending beyond 6 pm, it will be difficult for me to reach Sealdah station by 7 pm. I will have to figure a way out to get back home in Naihati," Minakshi Dutta, an employee at a private firm in the city, said.

Shyamal Das, a mason, said that he is a daily wage earner, and trains happen to be his only commute from Charan in South 24 Parganas district.