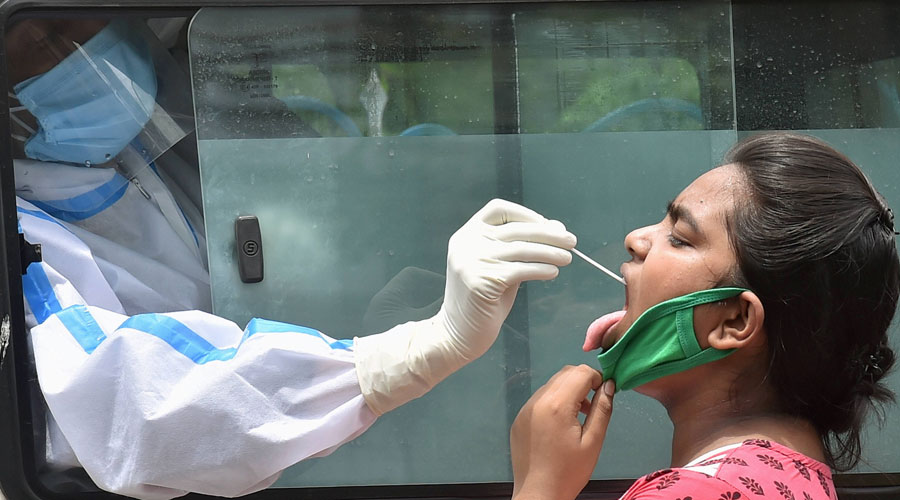 A health worker collects swab sample of a woman from an ambulance for COVID-19 testing at a locality in Calcutta on Friday.
PTI Photo
Meghdeep Bhattacharyya   |   Calcutta   |   Published 04.07.20, 06:36 AM

“Over 600 new cases have been reported daily since Monday. This is a considerable rise…. In a positive, we also logged 3,036 recoveries in seven days,” said a Bengal minister. The total number of active coronavirus patients in Bengal now are 6,200. The figure was 5,039 a week ago.

Of the 669 new cases, nearly 99 per cent were reported from districts that witnessed mass return of migrant workers and others stranded elsewhere in the country during the initial stages of the lockdown. Calcutta alone reported 182 cases.

Around 6.22 lakh people have successfully completed quarantine and they include over 2.54 lakh people who came back to Bengal by Shramik Special trains. Barely 72,000 people remain in quarantine now.

Owing to the considerable rise in new cases, the positive confirmation rate — the percentage of people found infected among those tested – deteriorated from 3.61 a week ago to 3.95 per cent.

The state government reported 553 deaths or 77.1 per cent as those with comorbidity “present”.