In Covid year, no takers for skilled hands as festivities take a backseat 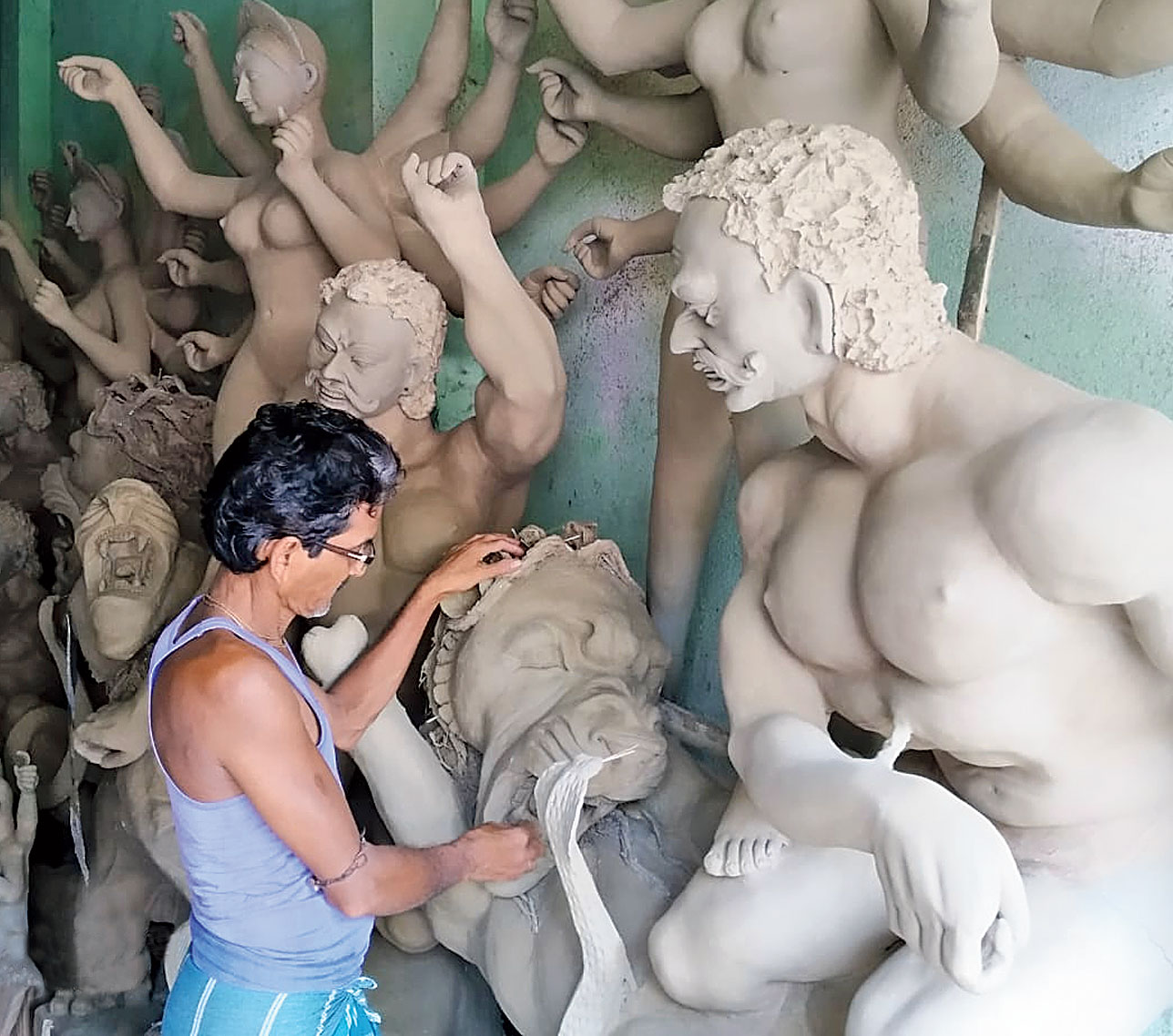 The livelihoods of hundreds of clay idol makers from various Bengal districts, including Birbhum, are under threat in the wake of the novel coronavirus pandemic.

Every year, the idols of the pantheon of five with goddess Durga in the lead are in high demand in many parts of Bengal, the rest of India and the Indian diaspora. Idols of lord Ganesh for the Ganesh Chaturthi festival are also sought-after in states such as Madhya Pradesh, Chhattisgarh and Maharashtra.

This year, clay idol makers in Birbhum, renowned for their skill, are facing an unprecedented crisis.

“We were accustomed to receiving several bookings during the month of June from Ganesh Chaturthi organisers in Maharashtra, as well as diasporic Bengali communities who wanted Durga Puja idols. This year, we did not get a single call,” said clay artisan Samar Pal, 32, from Nadanghat village in East Burdwan’s Kalna.

Accustomed to going to Mumbai for seasonal labour before Ganesh Chaturthi for the past eight years, Pal said he was set to lose up to Rs 1.5 lakh this year.

“The loss will hit me hard because I have to support my elderly parents. My father is also ailing and in need of urgent medical care,” Samar said.

He added that he and some 300 colleagues from nearby places would stay in Mumbai for two-and-a-half months and make at least a dozen Ganesh idols.

Artisans like Samar said that they used to go to Mumbai during June to August because they are accustomed to preparing for Durga Puja starting early September.

“This year we will earn nothing as all the organisers that we knew have cancelled the festivals,” said Samar. “Our earnings are seasonal and we stretch it for the entire year. A trip to Mumbai to make Ganesh idols for the festival pays well. Every year, Ganesh Chaturthi takes place in Mumbai on a grand scale similar to Calcutta’s Durga Puja. This year, things will be very different.”

A dejected Samar added that in the Covid-19 crisis, “everyone” thought only about migrant workers but not about artisans.

“Artisans like us from Nadia, Birbhum, Burdwan and Hooghly always get a steady annual income from orders in Bengal and outside. This year, we are yet to get a single order for even Durga idols. Nor are we getting government help,” Samar added.

“I used to go to Madhya Pradesh and Chhattisgarh every year to make Ganesh idols. This year, all of them (the organisers) said that they would celebrate the festival without an idol and as a result my income is zero. I used to spend my earnings from idols on my children’s education or invest it in agriculture,” he said.

He added that in all his life he had never seen such tough times.

“This year we have not got any orders for Durga idols either, which is unthinkable. If things don’t return to normal soon, we will have to starve,” said Nepal.

Santosh Sutradhar, a clay artisan from Birbhum’s Basapara, said he used to go to Jharkhand capital Ranchi for three months starting in June.

“I always worked outside Bengal for better earnings. This year, however, there is no work anywhere. Now I am planning to put my name on the list of the MGNREGA workers,” said a forlorn Sutradhar, referring to the 100-day assured job scheme.

Dulal Debnath, a resident of Kalna and a Durga Puja organiser in the area, said they were all aware of the troubles faced by clay artisans. “But we are yet to decide whether a community Durga Puja will be organised this year. So we have not ordered any idol yet,” he said.