On Friday, a group of 20 workers were spotted by a train driver, who deployed his emergency brakes and came to a halt barely 100m from the group 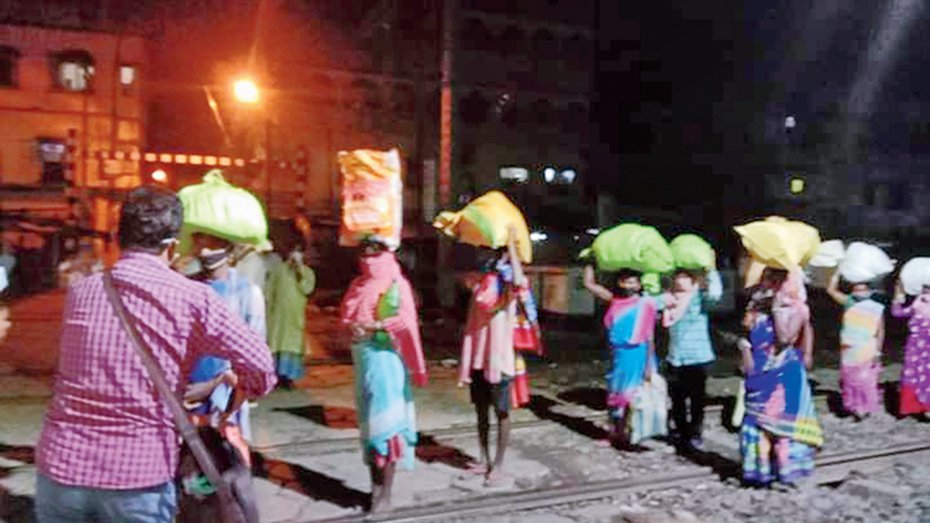 The migrant labourers who were saved from an accident at Nalhati station on Friday night
Telegraph picture
Snehamoy Chakraborty   |   Bolpur(Birbhum)   |   Published 10.05.20, 09:31 PM

His initiative came less than a day after a disaster involving migrant workers — similar to the one in Maharashtra’s Aurangabad on Friday — was narrowly averted in Nalhati on Friday night.

A group of twenty workers including 13 women and two children were spotted by the driver of a maintenance train, who deployed his emergency brakes and came to a halt barely 100m from the group.

In the letter, Singh mentioned the Nalhati and Aurangabad incidents in the same breath and requested real time information about the movement of freight and other trains travelling on the 193.4 km long tracks passing through the district.

“In light of the above (Nalhati incident) and in the view of the unfortunate incident in Aurangabad, round the clock mobile patrolling has been intensified along the railway tracks to prevent movement of migrant workers and other persons along the railway tracks.... To rule out the possibility of any kind of unprecedented incident, it is requested that intimation regarding movement details of all kinds of trains, carriages and rakes passing through Birbhum district be given well in advance to the special police control room,” the letter reads.

Contacted, railway officials said that it was not possible for them to give real time information of all kinds of trains. However, they said the railways were coordinating with the state government regularly.

The state government on Sunday felicitated the 20 migrant workers involved in the Nalhati incident on Friday.

Government officials, headed by the block development officer of Nalhati-I, Jagadish Prasad Barui, and officer in charge of Nalhati, Kartick Roy, showered petals on them and offered a rose to each of them. Following the programme, they were transported to their respective homes by the government later on Sunday.