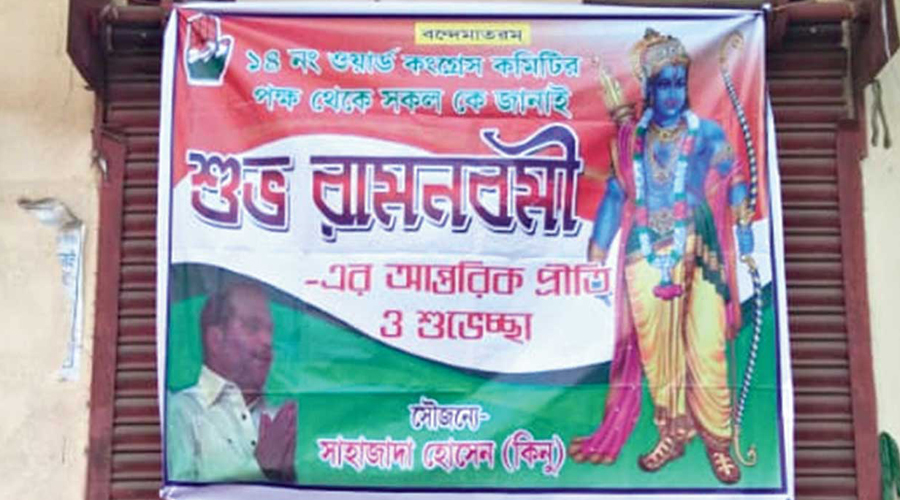 A Congress leader who sells shoes on pavements of Rampurhat in Birbhum district  for livelihood set an example of communal amity on Wednesday by putting up a flex to wish people on the occasion of Ram Navami.

The action of Sahazada Hossain, the 39-year-old Rampurhat town president of the Congress, comes at a time the venom of communal polarisation for the sake of winning an election threatens Bengal’s ethos to its very core.

There were two messages on Hossain’s flex, though they were unwritten: 1) Religions might be personal, but festivals are social. 2) Religions or deities do not belong to any political entity.

He spent Rs 250 to print the large flex with an image of Lord Ram and put it up at one of the crowded places in his locality of Railpar in Rampurhat. The flex drew many eyeballs as people noticed his name at the bottom.

“It was very nice to see a flex printed by him (Hossain) to wish us all Ram Navami. He is a very good human being who takes such initiative in every festival, irrespective of religion,” said Sanjay Sharma, a resident of Railpar area, which falls under ward 14 of Rampurhat municipality.

Several persons in the town, including political leaders, said the initiative was exemplary, especially at a time the administration had to stay on its toes around occasions such as Ram Navami in apprehension of communal tension.

In 2018, the young son of an imam of a mosque in West Burdwan’s Asansol was killed in a riot – purportedly instigated by the saffron camp -- that took place following a Ram Navami rally. However, the imam, Maulana Imdadul Rasheedi, had famously refused to identify the perpetrators and instead appealed for restoration of peace.

Even chief minister Mamata Banerjee had on Tuesday said that she was worried about the occasion of Ram Navami, alleging that the BJP had plans to foment communal tension around the occasion, which coincided this year with the holy month of Ramazan.

Hossain, who spends more time trying to sell shoes on pavements than in actual politics, has said he learnt the lessons of communal harmony since his childhood, as the area where he was brought up has a mosque, a church and many temples.

According to him, over the past two years, he noticed that the celebration of Ram Navami had become more political than religious.

“Even about three years ago, there were no large rallies, not that many pujas on Ram Navami in our town… but the BJP tried turning it into an important event for Bengal, to try and misutilise the occasion in order to divide people through hatred,” he said.

“So, I thought: Let me wish people on Ram Navami to send out a message,” he added.

Asked whether it was a political move by him to show solidarity towards the Hindu voters, Hossain said he could never associate politics with religion or festivals.

“I have been wishing people similarly for Durga Puja, Christmas and Id for years,” the Congress leader said, adding that it hurt him to see attempts at politicisation of religion and festivals for the sake of winning an election, that too by promoting hatred and division.

“I did not study much, for our family’s poverty, but I was always taught that we must all live happily together,” said Hossain, who makes around Rs 8,000 a month from selling shoes.

State agriculture minister and Rampurhat Trinamul Congress candidate Asish Banerjee lauded Hossain. “This is what Bengal is all about. This is what we are trying to protect,” he said.

The CPM’s Rampurhat candidate, Sanjib Barman, said: “I welcome the move… I am so proud of him.”

The BJP’s district president Dhruba Saha, however, claimed it was evidence of his party’s success in giving Ram Navami its due in Bengal. “We welcome this…. So many Muslims are now chanting ‘Jai Shri Ram’,” he said.