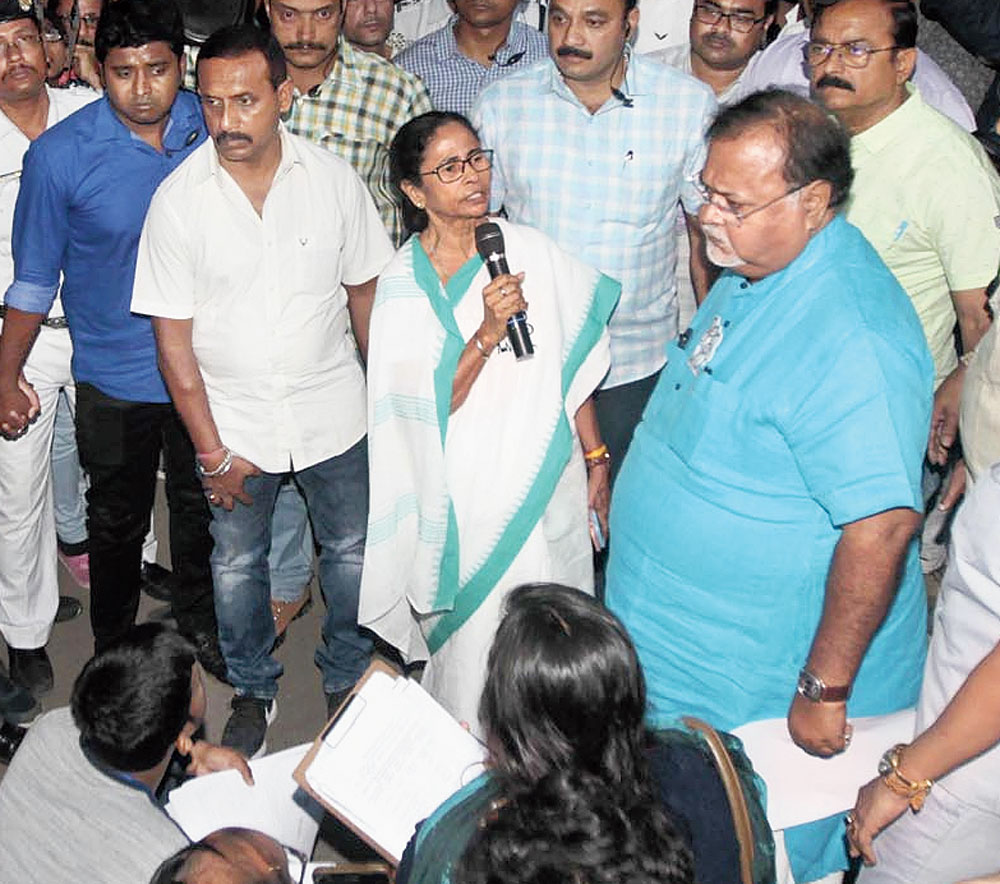 Chief minister Mamata Banerjee and education minister Partha Chatterjee with the protesters at the sit-in off the Maidan on Wednesday evening
Telegraph picture
Our Bureau   |   Calcutta   |   Published 27.03.19, 09:01 PM

Chief minister Mamata Banerjee on Wednesday evening met the 300-odd aspiring teachers who are on an indefinite sit-in off the Maidan.

She asked them to call off their agitation because “nothing can be done as long as the election process is on”.

“I will sympathetically consider your case as much as I can…. I request you to wait for some time. Elections have been announced. Even if I want to (resolve the matter), I cannot get it done. The model code of conduct is in place,” she told the group.

“You come and hold discussions with the committee that has been formed by education minister Partha Chatterjee. I want the matter to be sorted out. Please withdraw your sit-in.”

The indefinite sit-in, under the banner of SSC Yuva Chhatra Adhikar Manch, began near Calcutta Press Club along Mayo Road, on February 28.

Mamata reached the site along with Chatterjee in the evening.

“Everything has to be done through a system. There are some existing laws. Some laws can be changed if necessary, so that this broadens the scope. … I have no objection to a one-time special provision if it can be worked out…. I urge you to trust me. If there is a genuine case it would be taken care of irrespective of any political affiliation,” she told the protesters.

Left Front chairman Biman Bose said “she has bluffed by citing the model code of conduct”.

“The recruitment of these empanelled SSC examinees is possible with the permission of the Election Commission of India,” Bose said. “I am sure they will not object to it as the recruitment process had begun well ahead of the election announcement.”

Last Friday, education minister Partha Chatterjee had formed a five-member fact-finding committee to look into the grievances of the protesters.

The protesters have said they cleared the state school service commission exam but were not called for interviews despite posts remaining vacant.

The West Bengal School Service Commission had conducted written tests in November 2016 and December 2017 for 12,905 vacant posts of assistant teachers for classes IX and X and 5,711 for classes XI and XII in state-aided and state-sponsored schools.

The commission appointed 9,350 teachers for classes IX and X and 4,889 for classes XI and XII after two rounds of counselling.

Mamata’s visit to the dharna site was preceded by a meeting in the afternoon between representatives of the protesters and education department officials, including the members of the fact-finding committee, at Bikash Bhavan.

During the meeting, the representatives demanded that the department publish the updated vacancy list and the scores of the selected candidates.

“We are insisting on the scores being made public as this would make it clear if deserving candidates have been recruited,” Tania Seth, one of the representatives, said.