At least six ivory pieces weighing around 9.08kg, worth more than Rs 10 lakh, were seized from two men while they were being allegedly brought to the city from Siliguri late on Wednesday. 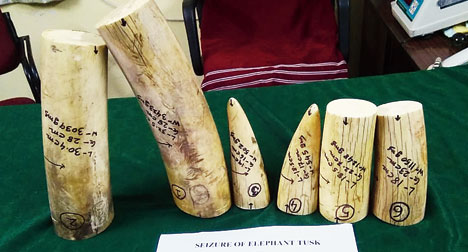 Calcutta: At least six ivory pieces weighing around 9.08kg, worth more than Rs 10 lakh, were seized from two men while they were being allegedly brought to the city from Siliguri late on Wednesday.

Possessing or trading in ivory items is banned in India. A violation of the law can lead to at least three years in jail and a fine of Rs 50,000.

A team of the directorate of revenue intelligence arrested Padum Bahadur Baidya, 40, who hails from Assam, and Kishore Kumar Rai, 45, a resident of Salugara in Jalpaiguri. Officers said they were waiting near the Tenzing Norgay bus stand in Siliguri to hand over the pieces of two elephant tusks to a man from Calcutta.

"We had information that some people had smuggled the ivory from Nepal and were to hand it over to someone from Calcutta, who would transport them to the city. We intercepted the duo and seized the ivory," an officer of the directorate in Calcutta said.

The accused have apparently told the sleuths that they had crossed over to India through the Panitanki border and brought in the ivory pieces wrapped in paper inside boxes.

"The men had sliced the two tusks so that they could be concealed and carried easily inside boxes," said the officer. "The prospective buyer might have got wind of the duo's arrest. He did not turn up."

Preliminary tests reveal the ivory pieces are from a recently killed elephant.

"Baidya and Rai are part of an international smuggling racket that deals in animal parts and have close ties with poachers in India as well as neighbouring countries," the officer said.

An officer of the forest department said uncarved ivory pieces fetched a high price in the international market.

"A kilogram of uncarved ivory can cost anything between Rs 20,000 and Rs 1,00,000 in the grey market, while intricately carved items can fetch up to crores of rupees," the officer said.

Ravi Kant Sinha, the principal chief conservator of forests, wildlife, and the chief wildlife warden, said it was not clear where the elephant had been killed.

The chief wildlife warden said ivory trade in India had come down significantly. Poachers usually target the illegal markets in China, Japan, Thailand, Vietnam and some other Asian countries where the demand for ivory is high.

India is home to 27,300 of the 50,000-odd Asian elephants found across the world, according to the 2017 count. More than 80 elephants were killed in India over the past three years.