On the evening of International Workers’ Day (May 1), a band of youths — all from under-privileged backgrounds and belonging to the Matua sect — had got into a huddle at a local club in Thakurnagar, about 62km from Calcutta, close to the border with Bangladesh.

They were not discussing the future of the working class nor planning their next movement. The 20-something youths at Udayan Sangha were engrossed in something more important.

“Can I make it to the National Register of Citizens?” an unemployed post-graduate, who did not wish to be named, tossed up the moot question. According to the young man, he got his higher education in Bengal, but did his schooling in Barishal in Bangladesh. “I am told that my college and university certificates won’t work,” the youth added.

He admitted that neither he nor anyone in his family had any land deed or passport or life insurance policy or bank account or birth certificate or ration card dating back to pre-March 24, 1971, the cut-off date used in Assam while drawing up the NRC. More than 40 lakh people in the north-eastern state could not produce any of the 10 documents that the Supreme Court had specified for inclusion in NRC.

With the discussion veering towards who had which documents at home, a pall of gloom descended as the crux of the discussion was: if the NRC is implemented, more than 95 per cent of the people in Thakurnagar — often referred to as the Mecca of the Matuas, a sect comprising the backward Namasudras who crossed over from Bangladesh after Partition — cannot make it to the list. 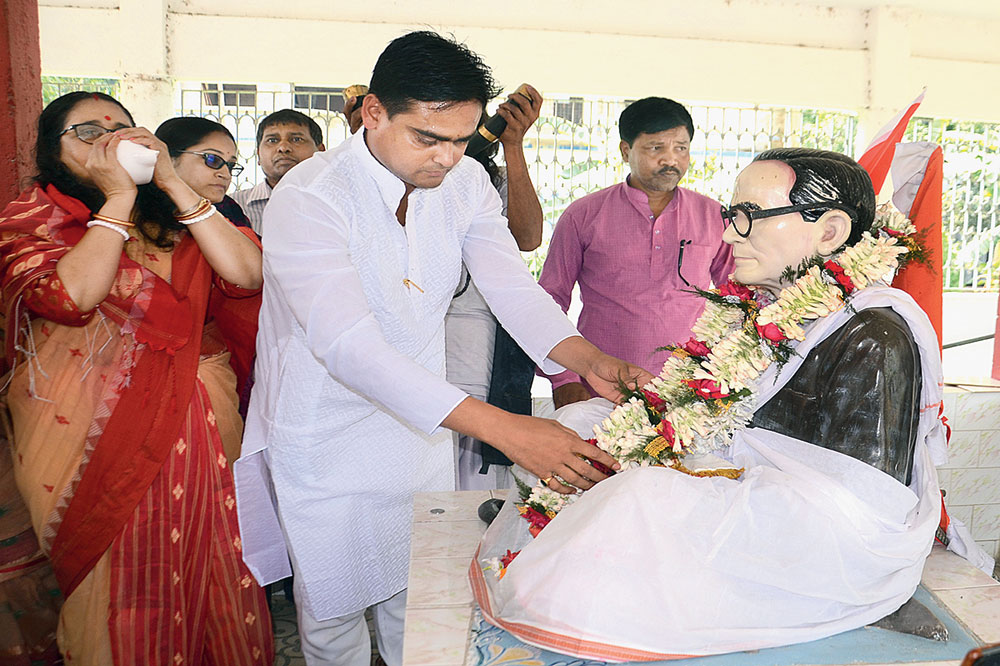 The trigger behind that evening’s discussion was the speech of BJP president Amit Shah that afternoon in Kalyani, 50km from Thakurnagar. In his campaign rally for the Bongaon seat, Shah had spoken extensively on the BJP government’s plans on two policy issues — the citizenship amendment bill and the NRC. Shah’s May 1 commitment that the NRC would be rolled out to weed out “infiltrators from Bangladesh” prompted the youths to check the documents in their possession.

“My father had come to India in 1970, and spent a year in a refugee camp in Burdwan before going back to Bangladesh. How could a poor migrant buy land or open a bank account or have an LIC policy?” asked the youth. Others, all belonging to migrant families from Bangladesh, nodded in agreement.

In the battle for Bongaon, the ruling Trinamul’s nominee, Mamatabala Thakur, and her campaign managers are raising the same questions to inconvenience the BJP whose vote share has been steadily growing in the constituency. From 3.95 per cent in 2009, the BJP’s share shot up to around 19 per cent in 2014. In the 2015 bypoll, necessitated by the death of Trinamul MP Kapil Krishna Thakur, the BJP nominee got more than 24 per cent votes.

The repeated stress by the BJP on its commitment to carry out NRC may come across as a self-goal, but party insiders think they can blunt the anti-citizenship register campaign.

“A majority of migrants from Bangladesh here are from the Hindu community, and they have enmity towards the Muslim migrants. We are telling people that the Hindu immigrants do not face any problem as they would be made citizens with the passage of the bill while the NRC would be used for identification of Muslim illegal immigrants,” said a close aide of the BJP nominee from Bongaon Shantanu Thakur.

The BJP plan is built on polarising the voters in a constituency that has over 50 per cent Matuas and around 20 per cent Muslims, mostly concentrated in Swarupnagar, South Bongaon and Bagda Assembly segments. “The Matuas will vote us as they support the citizenship bill,” said a local BJP leader, confident of wresting Bongaon.

Shantanu and Mamatabala belong to the same Thakur family which presides over the Matua sect, born out of a social and religious movement by Harichand Thakur among the backward Namasudra community in present day Bangladesh in the mid-19th century. The members of the sect revere the Thakur family as it carries the legacy of their deity, Harichand. Pramatha Ranjan, the great-grandson of Harichand, had founded Thakurnagar in 1948 to rehabilitate thousands of Partition refugees.

“Citizenship is a key issue among these migrants… We are reiterating the promise the Prime Minister that the citizenship for the Matuas will not be a problem after passage of the Citizenship (Amendment) Bill (CAB),” said a BJP insider.

On February 2, Prime Minister Narendra Modi launched his campaign from Thakurnagar, where he reaffirmed the BJP’s commitment to the citizenship bill, which seeks to facilitate citizenship for non-Muslim immigrants from Afghanistan, Bangladesh and Pakistan. Modi had also met Matua matriarch Boro Ma or Binapani Devi, an attempt to woo the community ahead of the Lok Sabha polls.

The turnout at Modi’s meeting had sent shivers through the Trinamul camp, as the show-of-strength rally was proof that the BJP was gaining ground in the border area.

The equations, however, started changing soon after. Boro Ma passed away in March, following which differences in the Thakur family tumbled out in the open as Mamatabala, widow of Boro Ma’s son Kapil Krishna, and Shantanu, her nephew, traded charges over the matriarch’s death. Even as the bickering continued in the family over the control of Thakur Bari, and a split along political lines was imminent, Shantanu publicly said he will never “contest elections.”

The situation suddenly took a different turn after March 26, when Shantanu was named the BJP nominee from Bongaon. Around the same time, the BJP leaders started their high-pitch campaign that NRC would be rolled out across the country.

“Shantanu had vowed with our religious text Hari Lilamrita in his hand that he would never join politics. Now, he is seeking votes… We can never support him,” said Kishor Mondal, standing outside the main gate of Thakur Bari. 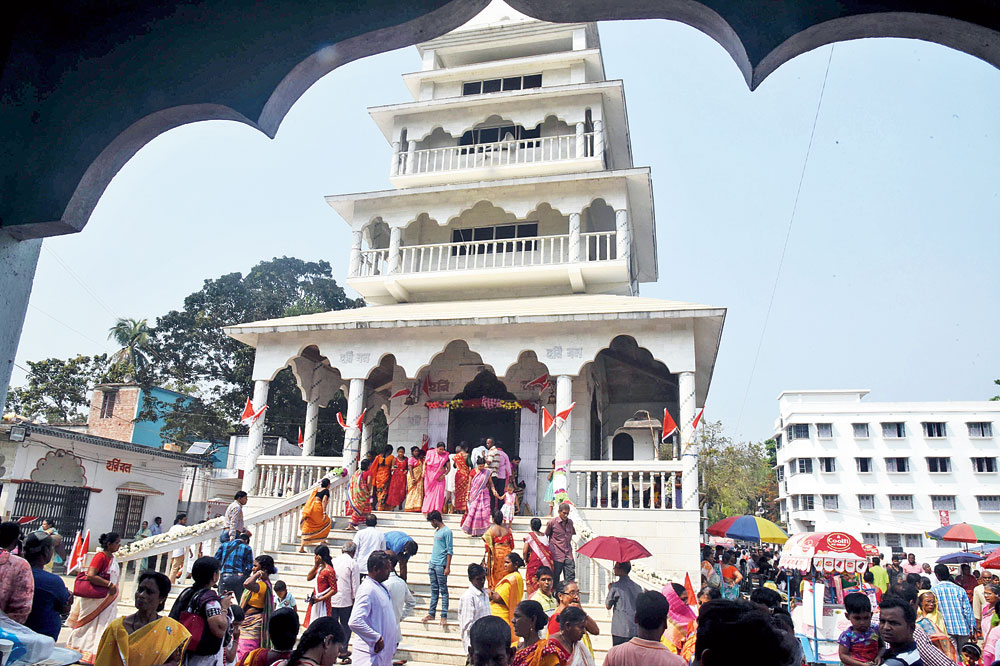 The 48-year-old then said the community was unhappy with the divide in the family along political lines. “Stop thinking that the Matuas would vote en masse… Gone are those days,” said Mondal, the clarity in his voice contesting the BJP’s poll arithmetic.

In parts of Bongaon, the BJP’s Hindutva agenda is also likely to face the Matua identity challenge as Bikash Biswas of Bagda asked: “We have always chanted Jai Harichand, Jai Guruchand… Why should we chant Jai Shri Ram?”

According to him, the community cannot trade its identity for the sake of a citizenship promise. “For citizenship, we will have to produce proof that we came here because we were persecuted due to religious reasons… Will it be easy? They (the BJP) are not telling us the facts hidden in the bill and fooling us promising that citizenship applications of those supporting the party would be dealt favourably,” he said.

Handbills on NRC and CAB and copies of the bill can be seen with local level leaders and opinion makers of the Matua community across Bongaon. Each time, the BJP leaders are referring to NRC, the Trinamul and the CPM leaders are reminding the voters about the plight of 40 lakh people in Assam.

The political battle has metamorphosed into a contest between the NRC and the CAB. While the benefits of polarisation seem to elude the BJP as the Matuas remain divided, the Muslims have firmly rallied around the TMC.

“Didi (Mamata Banerjee) has been so vocal against the NRC… We are with her,” said Yasin Mollah, a trader in Swarupnagar, which has over 48 per cent Muslim population.

Though the BJP leaders are dangling the citizenship carrot to win the majority of non-Muslim votes, the fear of NRC in the minds of the people has suddenly slammed the brakes on the saffron surge in Bongaon.

Trinamul — which has an overbearing organisational clout in the district, and also in neighbouring Nadia where two Assembly segments of Bongaon fall, in comparison to a fledgling BJP machinery — seems to have an edge in the electoral battle.