State to bear the cost in absence of central funds 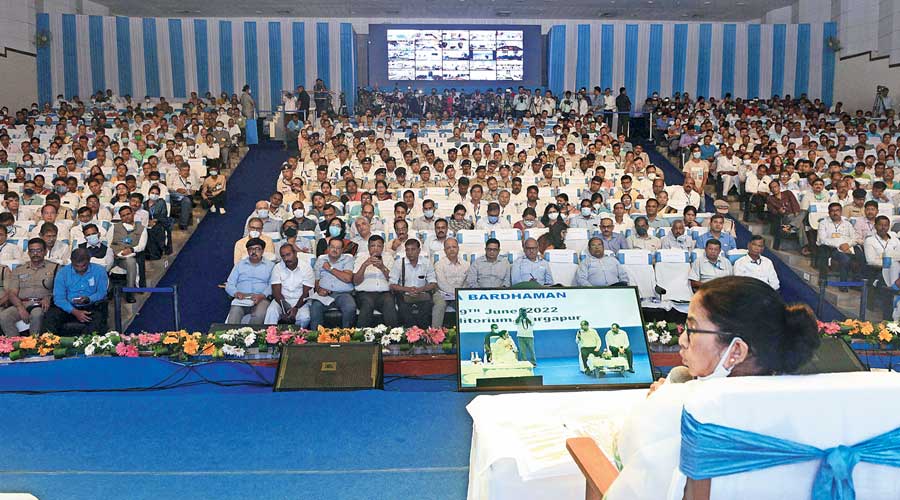 Chief minister Mamata Banerjee on Wednesday asked district magistrates and rural body heads across Bengal to continue the construction of roads and dwelling units in rural areas by using funds of the 15th Finance Commission after the Centre suspended the release of funds under the PMAY (Pradhan Mantri Awas Yojana) and PMGSY (Pradhan Mantri Gram Sadak Yojana), citing the change in project names by the state as the reason.

Addressing an administrative review meeting of East Burdwan and West Burdwan districts in Durgapur on Wednesday, Mamata said roads had to be laid before the panchayat polls next year as people would vote only if they got service.

“The Centre has stopped allocating funds under various schemes on the excuse of changing the names of the projects. I will go to Delhi to enquire about it, but at the same time we have to find an alternative. We cannot ask people in Bengal to suffer because of the Centre,” the chief minister said at the meeting.

Apart from East and West Burdwan, district magistrates, SDOs BDOs and rural body heads across the state attended the meeting through video-conference.

“People will be pleased if they find the condition of roads in their village is good. Construction of new roads is a project that is easily visible and makes people happy,” the chief minister said.

Mamata asked the heads of rural bodies to use half of the funds of the 15th Finance Commission to construct roads while her government would take care of the ongoing housing schemes.

“The rural bodies, including zilla parishads, should now only focus on constructing and renovating roads from 50 per cent of their funds. The district magistrates will monitor the work and this is now a statewide policy. We (the state government) will take care of the ongoing housing projects,” Mamata said.

Sources said the chief minister made it clear that the electoral fortune of the ruling party depended heavily on schemes such as dwelling units for the rural poor and construction of rural roads.

“As the Centre has stopped the release of funds under these two schemes, she is desperate to find a way out. She is banking on the 15th Finance Commission funds that go directly to the rural bodies,” said a senior government official.

The chief minister also directed the DMs not to include names of new beneficiaries in the dwelling unit or housing schemes till the Centre released funds for the project.

“We will finish construction of houses as per our previous target in the next five years. Stop enlisting new names because the Centre has not yet set a fresh target in the ongoing financial year,” she said.