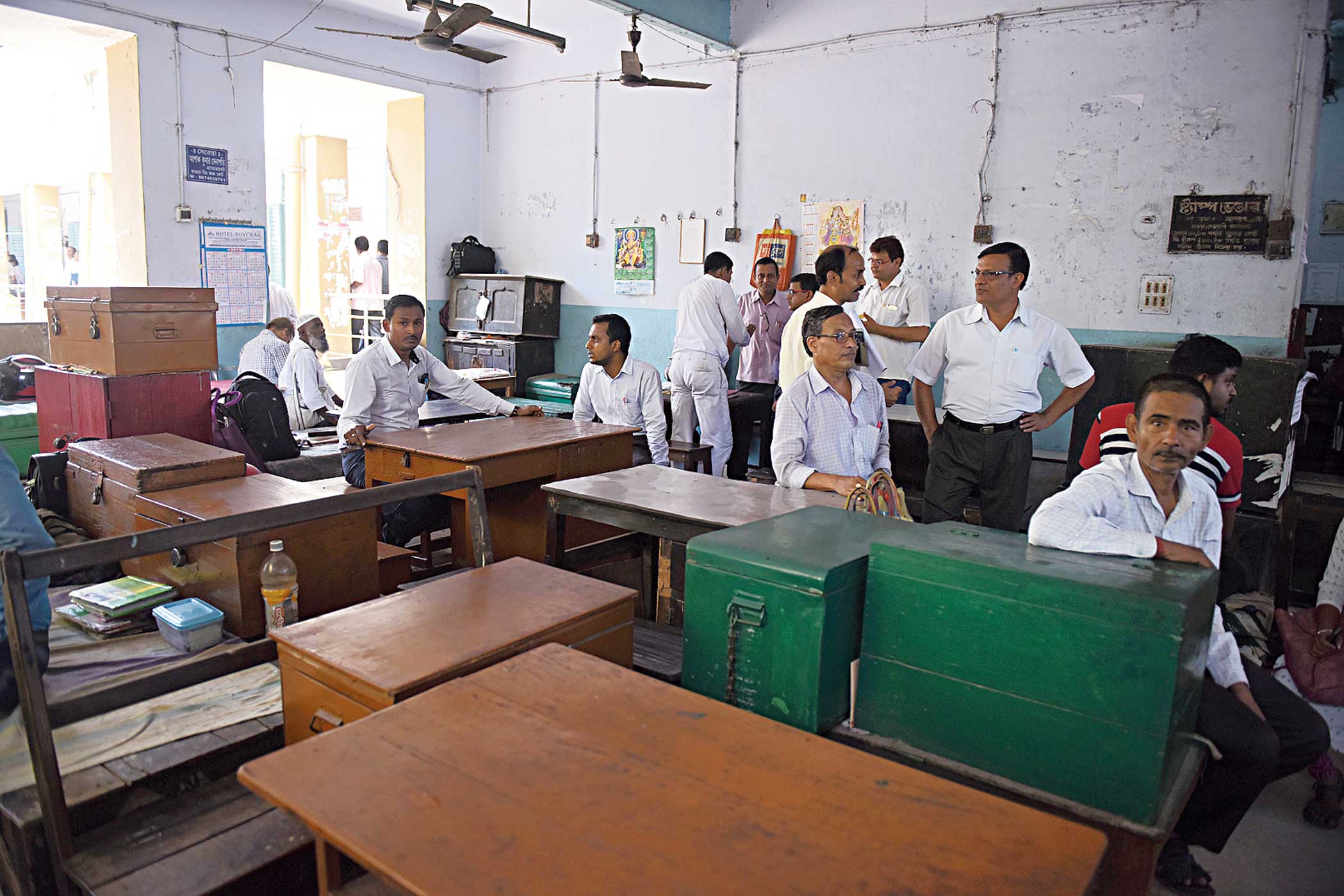 Empty desks at the Howrah district court on Thursday. Lawyers struck work to protest alleged police excesses during a clash with employees of the Howrah Municipal Corporation on Wednesday.
Picture by Gautam Bose
Our Legal Correspondent   |   Calcutta   |   Published 25.04.19, 08:11 PM

The chief justice of the high court on Thursday sought reports from the state administration and the judiciary on Wednesday’s clash between lawyers and staff of the Howrah district court and employees of the Howrah Municipal Corporation (HMC).

Chief Justice T.B. Radhakrishnan told lawyers at the high court, who complained about the role of the police and sought suo motu action by him, that the court would step in “only after receiving the reports”.

The chief justice said he was expecting the reports within seven days.

The clash on Howrah’s Mahatma Gandhi Road, which left at least 20 people injured, broke out over parking of vehicles by lawyers on the Howrah Municipal Corporation premises.

Trouble broke out after a guard at one of the gates of the HMC prevented a senior lawyer from entering the compound with his two-wheeler.

A heated exchange between the two snowballed into a fight with lawyers and employees of the civic body attacking one other with bamboo poles, sticks and stones.

The violence continued in phases for around eight hours till police, including Rapid Action Force personnel, arrived. A police team led by senior officers entered the court compound and allegedly beat up some lawyers and secretarial employees.

The two lawyers and two HMC employees who had to be admitted to hospital with head injuries were discharged on Thursday.

Around 10.15 on Thursday morning, a large number of high court lawyers reached court No. 1 of the high court, where the division bench headed by the chief justice hears cases.

Senior advocate Bikash Ranjan Bhattacharyya, who was speaking for the lawyers, mentioned the issue before Chief Justice Radhakrishnan and requested him to take suo-motu cognisance of the “assault and police inaction” and ask the administration to take immediate steps against the “culprits who beat up the lawyers mercilessly”.

Bhattacharyya submitted: “Because of scarcity of space on the Howrah court premises, a lawyer went to park his motorbike in the area under the municipal corporation. But employees there assaulted him and hit him on his head. When other lawyers protested, some people attacked them and beat them up mercilessly. The police are yet to take action against the accused. So, the high court should issue a suo motu directive to the police.”

Chief Justice Radhakrishnan said: “I have sought reports from both the administration as well as the judiciary on the issue. Trust me. The high court will take suo motu action only after receiving the reports.”

Asked about the reports, a law department official said: “The state administration will submit a report on the basis of the police version of the incident. Similarly, a separate report, preferably by the district judge of Howrah, will also be submitted to the chief justice.”

The official said seeking reports from the state government and the judiciary was the norm whenever there were allegations of an attack against lawyers. “The high court takes its decision after going through the reports.”