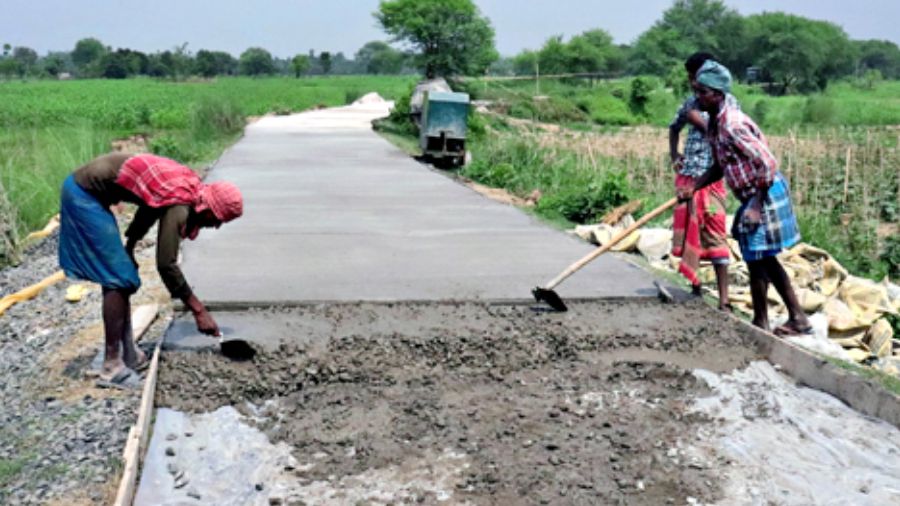 The Centre on Thursday released Rs 343.16 crore for Bengal to upgrade 144 rural roads under the Pradhan Mantri Gram Sadak Yojana, under which grants had been frozen since April.

Funds had been frozen as the state government had changed the central scheme’s name to Bangla Gram Sadak Yojana. The Centre also froze funds for housing for the rural poor and the 100 days’ job scheme, for changing the name of the central project and on charges of financial irregularities, respectively. Trinamul had protested against the move and attributed it to a political motive.

Against this backdrop, the release of funds under one central scheme was significant, said a source.

“The Centre has approved the upgrade of 144 rural roads across the state under the PMGSY. The length of the roads is 957.25km and estimated project cost is Rs 584.88 crore, Rs 343.16 crore from the Centre and Rs 241.22 crore from the state. The Centre has released its share,” said a Nabanna source.

The development hinted that the state’s initiatives to rectify some irregularities pointed out by central monitoring teams had started yielding results. “The state had earlier put up boards mentioning the PMGSY projects as Bangla Gram Sadak Yojana.... But as soon as funds were held up... the state government restored the original name,” said a source.

Another official said the state has convinced Delhi that no further irregularities will be allowed.

The Centre on Thursday also approved a proposal to upgrade 6,000km rural roads in Bengal by 2025 for which Rs 5,500 crore will be allotted.

Officials in Nabanna are hoping to get funds under other central schemes too.

“The state has restored the name of the PMAY (Pradhan Mantri Awas Yojana) from Banglar Bari. PMAY funds are likely to come soon,” said a source.

It may not be that easy to get funds under the 100 days’ job scheme as the Centre wants the state to recover cash from those who embezzled it, a job easier said than done, said a source.

However, Trinamul leaders are optimistic. “The BJP will have to face questions ahead of rural polls if funds are not released under rural development schemes. Delhi will be forced to release funds for the 100 days’ scheme soon as it gives livelihoods to 1.5 crore rural people in Bengal,” said a Trinamul insider.

Chief minister Mamata Banerjee on Thursday wrote to Prime Minister Narendra Modi on the ongoing erosion by the Ganga in Bengal’s Malda, Murshidabad and Nadia districts, requesting him to advise the Centre to ensure a detailed technical study involving all stakeholders and draw up an integrated plan to combat the erosion in the Ganga-Padma river system.