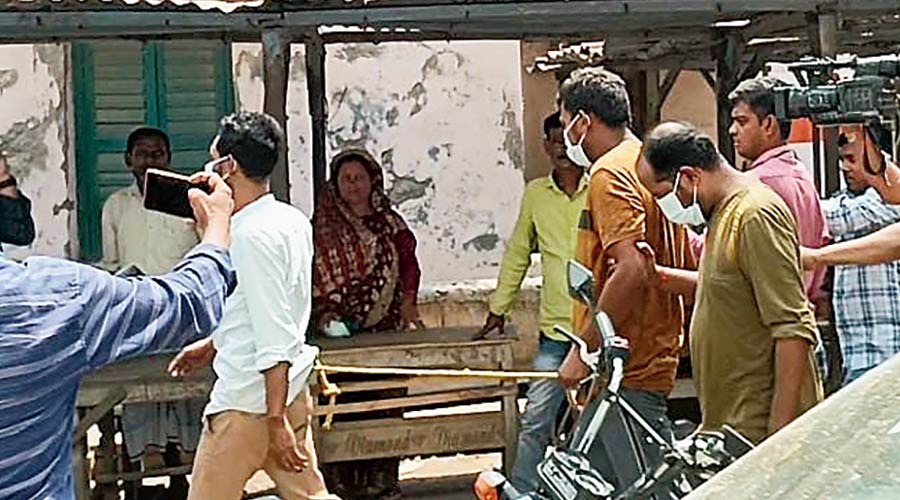 The accused in the Bhadu Sheikh murder case being produced before Rampurhat court on Saturday
Snehamoy Chakraborty   |   Calcutta   |   Published 10.04.22, 02:12 AM

The CBI on Saturday registered a fresh FIR in the Bhadu Sheikh murder case and took five arrested persons in its custody as it started its probe into the death of the late Trinamul deputy chief of Barshal gram panchayat following Friday’s Calcutta High Court order.

The central agency is  probing both the March 21 Bogtui carnage in which nine persons died and Bhadu’s murder which apparently triggered it.

Bhadu was killed on March 21 evening at Bogtui More on NH14 when four bike-borne goons hurled bombs at him.

Six persons were arrested by the state police in connection with his murder. “Five persons in police custody for 10 days were taken into custody by the CBI,” said Surajit Sinha, the assistant public prosecutor of Rampurhat court. Included among the five is Noor Islam a.k.a. Sanju, the son of Sona Sheikh, the owner of the house from where seven charred bodies were found on March 22 morning.

On Saturday evening, the CBI visited the spot from where Bhadu’s body was found.

The sixth arrested person, Hanif Sheikh, is in judicial custody.

The CBI on Saturday registered its case on the basis of a complaint from Bhadu’s brother Bikir Ali and slapped on the accused charges of murder and criminal conspiracy under the IPC as well as provisions under the explosives acts.

At Rampurhat court, Sanju told the media that he and his family members had been away from the village for the past one year owing to intimidation from Bhadu and his close aide Lalon Sheikh.

“Bhadu was part of a mafia. His people set fire on our houses and killed our people. We had been fleeing from our village for the past one year following threats by Bhadu and Lalon,” Sanju told reporters while he was taken to the court.

Several local people told this correspondent that Bhadu was involved in the illegal trade of sand, stone and cattle with the support of local police and local Trinamul leaders like Anarul Hossain, who was the block president of Trinamul before the Bogtui case erupted and he was arrested shortly afterwards.

During its probe, the state police found that the murder of Bhadu was over a long-standing conflict with his rival group led by Sanju Sheikh and Palash Sheikh.

Police had earlier charged 10 persons with murder. Six were arrested.

CBI sources said the reason for Bhadu’s murder is vital as it triggered the carnage that claimed nine lives.

The central agency sleuths started interrogating the five persons in their camp office after taking them into their custody to know if any others were involved in his murder.

Bhadu used to be guarded by his close aides, it has been revealed.

“A few minutes before Bhadu was killed, someone from the group took most of these aides to a nearby shop of sweets… Close aides must have been involved and that's why the goons attacked him when he was alone. These are part of our investigation,” said a CBI source.