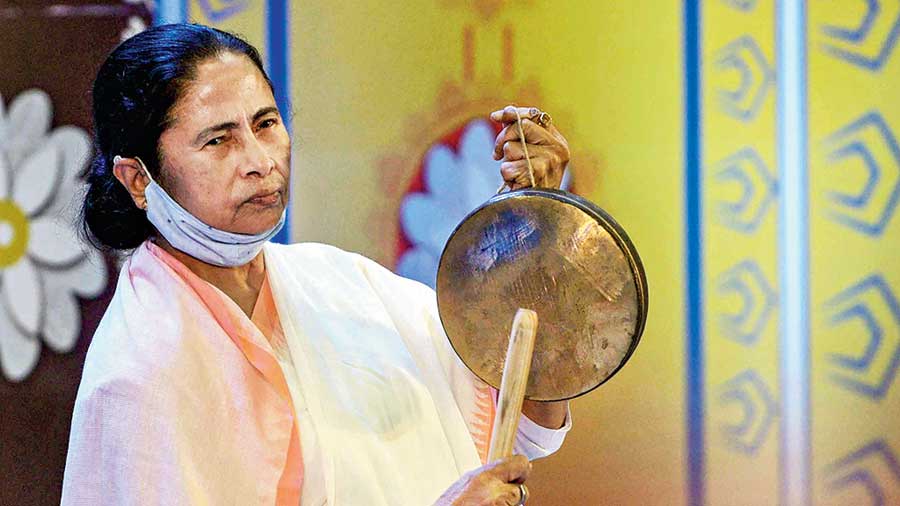 The move assumes significance as it is expected to create both economic and political spin-offs.

On Thursday, the chief minister instructed officials — during a programme in which she inaugurated 110 pujas in 12 districts through videoconference from Nabanna — to transfer the one-time financial assistance to the bank accounts of the hawkers as early as possible.

“Complete the process at the earliest and ensure that funds are transferred to the bank accounts of the hawkers as early as possible,” she said.

It was clear from her sense of urgency that she wanted the money to reach hawkers, most of whom have suffered significant income loss because of the pandemic-induced lockdown, before the festive season so that they can do some festive shopping.

While Rs 2,000 is a modest amount, it will  help people who have had very little earnings in the last few months.

“This is a kind of direct benefit transfer.… This will also have a positive spin-off for the state economy as people will start buying things with the money,” said economist Abhiroop Sarkar.

In the months of lockdown, several economists had suggested the Narendra Modi government to opt for the DBT (direct benefit transfer) route and transfer money to the accounts of migrant workers, who lost jobs during the pandemic.

The fact that Mamata — despite the constraints facing the state coffers — has decided to help the hawkers with a one-time grant is a good example of welfare economics, said a city-based economist who did not wish to be named.

“I know that it will become a political issue tomorrow as the Opposition parties will attack the CM... I don’t want to be a party in these political games,” the economist said while explaining the reason for requesting anonymity.

Some officials close to the chief minister think that though the Opposition may question the DBT to hawkers or the grant of Rs 50,000 to clubs as dole, the measures will end up boosting the state’s economy during the festive season.

“The state has already spent Rs 185 crore by giving Rs 50,000 each to 37,000 puja committees. Now, another Rs 20 crore would be sent to give one-time financial assistance to 1 lakh hawkers,” said a senior government official.

“Spending a sum of Rs 205 crore ahead of the festive season would boost the state’s economy.”

Some district magistrates this correspondent spoke to said that the decision to help the puja organisers has started yielding positive results for the local economy.

“Usually, we receive 1,700 applications from organisers seeking permission for Durga Puja in our district every year. But this year, initially we had received about 800 applications before the scheme was announced by the chief minister. But now, we have granted permissions to more than 1,300 pujas this year,” said a district magistrate from a north Bengal district.

Another DM from south Bengal said that almost all the pujas — 1,100-odd — would be held this year after the chief minister announced to help the organisers.

The DMs said that each of the pujas trigger a series of economic activities in local areas.

“The decorators get work, the electricians get work and several other activities happen around the pujas. All these benefit the unorganised sectors, which ultimately helps to boost the economy,” said a DM.

According to the notification issued on Wednesday, the financial assistance is being offered to the hawkers as they could not earn their livelihood during the lockdown period. The hawkers would now submit applications seeking the assistance to the local police stations.

The local civic body would receive the applications after police verify them. Once received by the local civic bodies, funds would be allotted by the urban development and municipal affairs department to the local bodies to disburse the financial assistance.