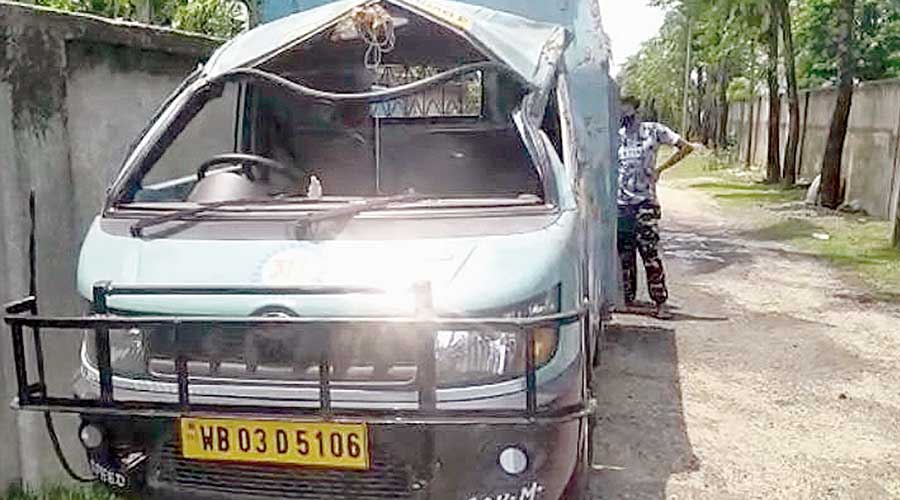 The Tata Ace that overturned on Basanti Highway on Sunday.
Telegraph picture
Our Special Correspondent   |   Ghatakpukur   |   Published 07.06.21, 02:31 AM

A man who was part of a team that was carrying relief materials for Sunderbans residents affected by cyclone Yaas died after one of the vehicles the group was travelling in overturned on Basanti Highway on Sunday morning.

The 32-year-old victim, Loknath Das, had lost his father 18 days ago. The sole breadwinner of his family is survived by his mother, younger brother, wife and two children, said residents of Muchibazar in Ultadanga where the family stays.

The team was carrying relief materials on behalf of two clubs in Ultadanga - New Golden Star Club and Kabiraj Bagan Super Star Club. They were headed for Hingalganj, in the Sunderbans, when the Tata Ace in which Das was travelling overturned in Ghatakpukur, around 35km from the heart of the city.

Police said the driver lost control of the vehicle after a tyre fell into a crater beside the road.

Many vehicles loaded with relief materials are heading for cyclone-affected areas in North and South 24-Parganas every day with police permission. Most of them travel through Basanti Highway, which has some sharp turns and is prone to accidents.

Members of the Ultadanga clubs had left for Hingalganj around 4am on Sunday in three vehicles. They were carrying dry food, clothes, baby food, drinking water pouches and other items.

“Loknath was in the third vehicle. At one point we realised that the third vehicle was not following us. We turned back and travelled a few metres towards the city before we came across an accident site,” said a member of one of the clubs who was part of the entourage.

The people travelling in the Tata Ace and the relief materials had flung on the road by the time they were spotted by their friends in the other two vehicles.

“Loknath was most grievously injured as most of the relief materials and other passengers fell on him. He was taken to a private hospital on EM Bypass, where he was declared dead,” said the team member.

Another passenger, Rajib Saha, suffered multiple fractures in the face. A few others were injured, too.

Loknath’s aunt said he earned a living by stitching garments. “We are requesting the government to help the family in their hour of need. He met this tragic end while trying to help the poor. His family deserves some help,” said Rita Das, the aunt.

“It is most unfortunate that he lost his life while trying to do a noble job. Our club has been feeding the poor since the stricter Covid curbs kicked in three weeks ago,” said a member of one of the clubs.