Advertisement
Home / West-bengal / Calcutta / Bengal Polls 2021: A confluence at a place of worship in Calcutta

Bengal Polls 2021: A confluence at a place of worship in Calcutta 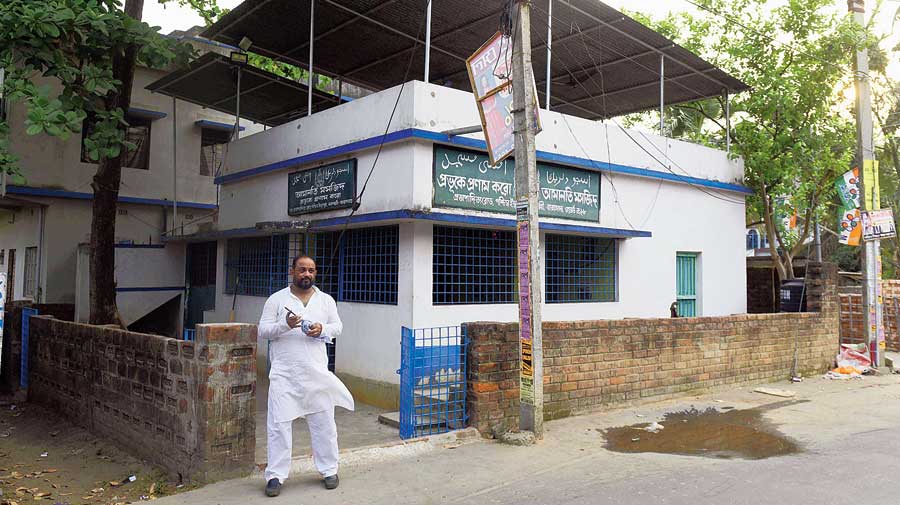 A handful of men sat on the floor of a small mosque in Barasat in North 24-Parganas on Thursday evening to break bread together after fasting since the early hours for Ramazan.

A 47-year-old man, a Hindu, munched on puffed rice, fruits and telebhajas along with the rest. Partha Sarathi Basu was not just another visitor at the mosque. His family has owned and cared for the mosque for over 50 years. 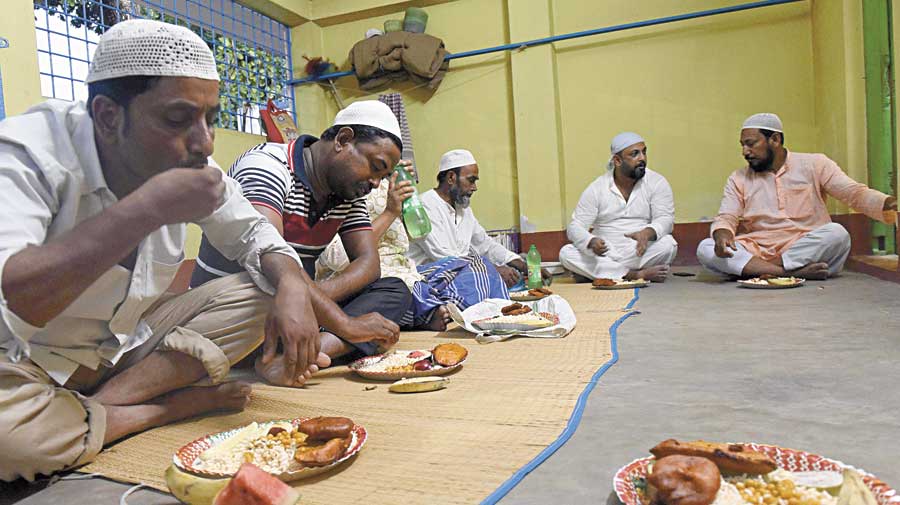 The Thursday iftar at the mosque. Partha Sarathi Basu (second from right) eats with others.
Sanat Kr Sinha
Advertisement

Standing on a four-cottah plot in a neighbourhood some 26km north of Calcutta, Amanati Masjid can be a blink-and-miss structure for the uninitiated. In reality, it is a shrine to Bengal’s culture of inclusiveness, especially when the politics of religious polarisation is rearing its ugly head in the state.

Partha’s grandfather shifted to Barasat’s Nabapally in the aftermath of the 1964 riots, swapping his family land in Bangladesh’s Khulna with that of a Muslim family in Barasat’s Nabapally. After shifting base, the Basu family found a “barren and almost desolate” mosque standing in the middle of the land. The property documents had no mention of the structure.

Many Hindu neighbours had suggested that the Basus raze the mosque. But the family did not. Instead, they renovated the mosque and nurtured it with love. Today, the mosque is the praying place for hundreds of people in the area. 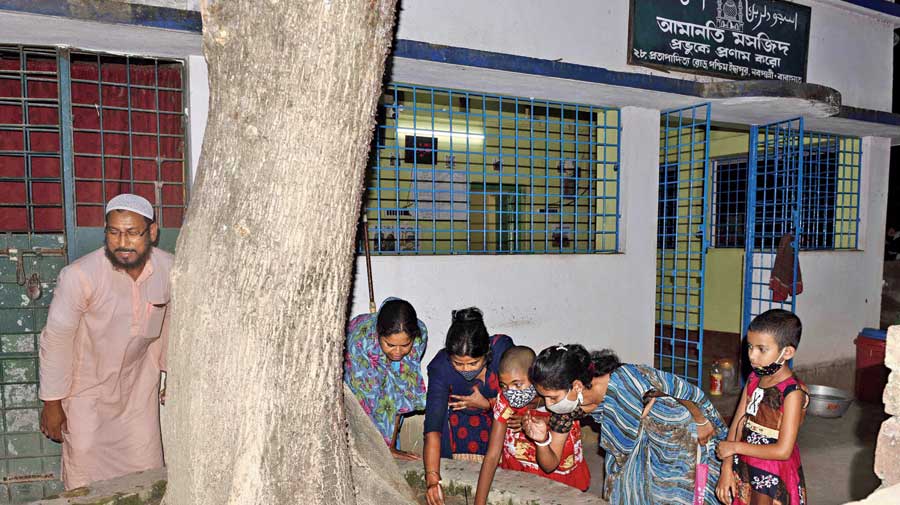 “I am a practising Hindu from the Gautam gotra (gotras are lineage segments tracing their origins to seven ancient seers). But my religion teaches me to respect all other religions. The elders of my family have given their sweat and love in running this mosque. It is a part of our identity and I will preserve it,” Partha told Metro on Thursday.

He stressed the “need” to preserve the identity because he was worried about the emergence of the politics of “division and hatred”.

“Hindus and Muslims have lived peacefully here for years. But recently, the Jai Shri Ram cries get louder when a political rally passes by the mosque. I have also had visitors from certain Muslim organisations offering to buy the land on which the mosque stands to build a much bigger structure,” said Partha, who looks after his father’s kerosene dealership business.

Partha is active on social media. “I have been taunted as Mohammed Partha Sarathi Basu by a certain section of people,” he said.

The mosque falls under the Barasat Assembly seat, which votes on Saturday.

The mosque is named after Shah Amanat, an 18th-century ascetic in Chittagong, worshipped by Hindus and Muslims alike, including Partha’s family. 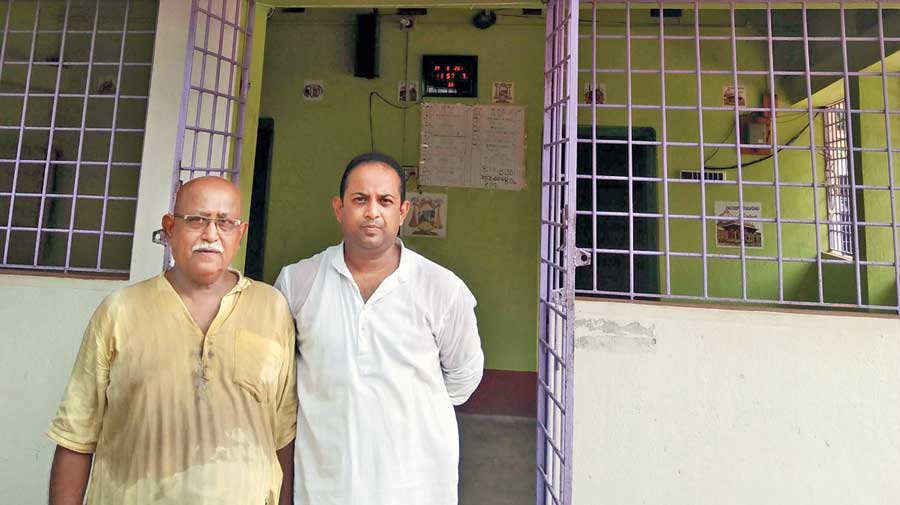 Amanati Masjid is among many such shrines that uphold the syncretic nature of devotionalism in Bengal. In March-end, this reporter had visited Ghutiari Sharif in South 24-Parganas to find Hindu and Muslim women dipping their palms together into a pond in the shrine compound, praying silently to have their wishes (manat)  fulfilled.

Social scientists have pointed out that the deep-rooted syncretism in Bengal’s culture would challenge any political party seeking to polarise voters.

Amanati Masjid, a single-storey structure with a tin roof, is not only revered by Muslims but by several Hindu families in the neighbourhood. On Thursday, some women turned up to light candles and incense sticks at the base of a tree inside the compound in the evening.

A stop at the mosque is a must for a new bride stepping into the Basu family. After a death, the body is brought to the mosque on its way to a crematorium.

Students halt at the shrine before an exam irrespective of their religion, residents said. 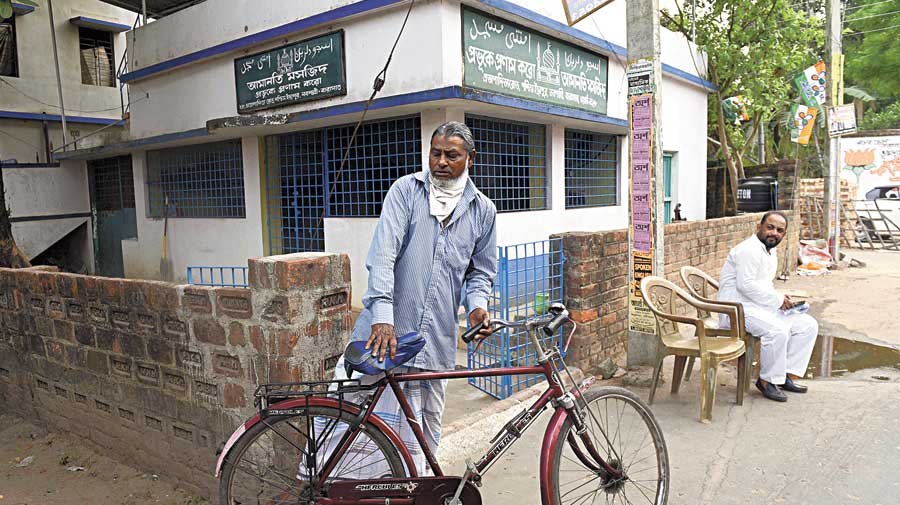 This picture was taken a couple of years ago, when Basu was still visiting the mosque regularly
Sanat Kr Sinha

Two boards with the name of the mosque stuck to its walls also have the three words written on them — “Prabhuke pranam koro (Pray to the Lord)”.

“Prabhu is usually used in a church and pranam is a Hindu tradition. The first imam of the mosque, Abubakkar Siddiqui, had suggested the phrase because he wanted this place to be a refuge for all,” said Partha.

His family home stands right opposite the mosque. His uncles still live there. Partha and his father, Dipak Kumar Basu, have shifted to an apartment in Barasat’s Dak Bungalow More.

Basu senior is 71. Till a couple of years ago, he used to open the doors of the mosque every day in the morning and mopped the floors himself.

“When we saw the mosque in 1964, it was almost in ruins, replete with snake skins and thick shrubs. Many neighbours asked us to tear it down. But my mother, who was a staunch believer in Shah Amanat, lit a candle in the mosque compound one day. She felt an instant connection with the place,” the septuagenarian added.

Abdul Akhtar, the present imam of the mosque, said the mosque drew visitors from far and near. “People come from all faiths. Everyone is equal in front of Baba (Shah Amanat),” he said.

Sheikh Azharuddin, 24, is a regular at the mosque. A master’s in history from Rabindra Bharati University, Azharuddin has recently landed a job with the state police.

He said he owed “his success to the mercy of Shah Amanat”.

“Half a century ago, when the grandfather crossed over to this side, they were persecuted. They wanted this mosque to be a refuge for all those who were persecuted and who needed healing. We will neither let go of this place, nor this principle,” said Partha.