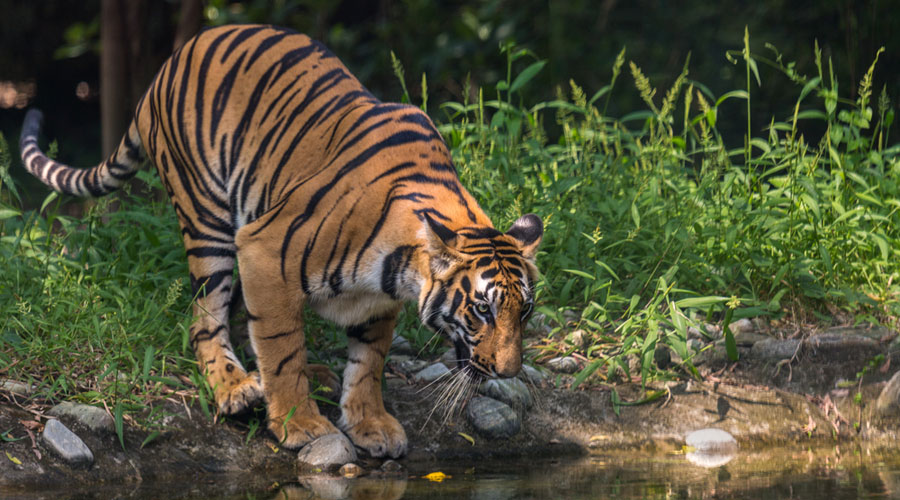 The Covid-19 pandemic has posed serious livelihood challenges to residents of the Sunderbans. Cyclone Amphan has doubled the hardships and many people are becoming dependent on the forests for livelihood.
Shutterstock
Debraj Mitra   |   Calcutta   |   Published 02.11.20, 03:11 AM

A man who had ventured into a forest creek in the Sunderbans to catch crabs died after being mauled by a tiger on Friday.

Sashanka Mandal, the 18th victim of tiger attack in the Sunderbans since March, was a resident of Lahiripur village in Gosaba, over 90km from the heart of Calcutta.

“He was part of a small group that had ventured into the creek on a small unlicensed boat. The incident took place inside Jhila-6 forest. The men were catching crabs in a shallow creek when a tiger pounced on Mandal. The other group members raised the alarm and the tiger could not drag Mandal away. But he was fatally injured,” said an official of the Sunderbans Tiger Reserve (STR).

The place where the incident occurred falls in the STR territory.

Licensed boats are allowed to fish in the rivers in the mangrove delta. But venturing into the forests and shallow creeks is prohibited. The creeks draw fishermen because of crabs. But they are extremely dangerous because the tigers often venture into these creeks.

Before Mandal, at least 17 people have been killed by tigers in the mangrove forests since March. All of them, including Mondal, had ventured illegally into the forest areas, officials said.

The Covid-19 pandemic has posed serious livelihood challenges to residents of the Sunderbans. Cyclone Amphan has doubled the hardships and many people are becoming dependent on the forests for livelihood.

Many of them are venturing deep into the tiger territory, risking their lives, to catch fish and crabs every day.

Tempers are frayed in the region because of the series of deaths, many of which have taken place in the Jhila forest area.

Forest department officials have been holding meetings with panchayat pradhans, members of the joint forest management committee and villagers from the Sunderbans and asked them not to harm tigers if they spot one.

“We are conducting regular awareness campaigns in the villages. But people are still venturing into the forests to catch fish and crab,” said Tapas Das, the field director of the Sunderbans Tiger Reserve.