More than 1,000 people from all over Bengal assembled at the Ramlila Maidan to demand appropriate action 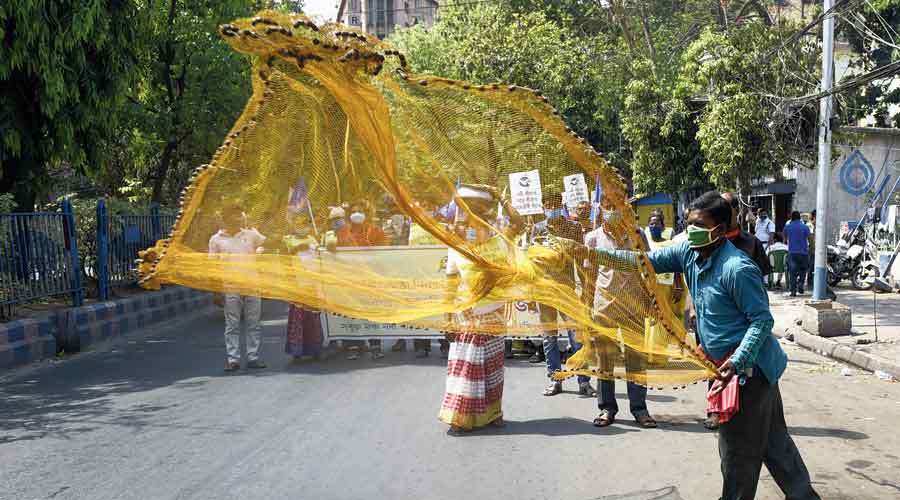 More than 1,000 people from all over Bengal assembled at the Ramlila Maidan in central Calcutta on Wednesday to demand appropriate action from political parties to save rivers, and wetlands and other water bodies across the state.

The public meeting, with the theme slogan “Save rivers, water bodies and wetlands; save the state”, organised by the green platform Sabuj Mancha with Dakhinbanga Motsyojibi Forum (DMF), was attended by those who have been fighting for the cause for a long time.

Rajendra Singh, called the Waterman of India, sent his solidarity message from Rajasthan, highlighting the threat to the Adi Ganga.

The Adi Ganga, the internationally acclaimed East Calcutta Wetlands, the Saraswati river in Howrah, the Ichamati and the Churni in North 24-Parganans, and the Atreyee, Mahananda and the Phuleswari in north Bengal were highlighted by the speakers as some of the vulnerable rivers.

“People representing nearly 30 rivers, water bodies and wetlands have come today, including many from north Bengal. In north Bengal, we are also concerned about the trans-boundary rivers like the Teesta and the Atrai,” said Tuhin Suvra Mondal, one of the conveners of Sabuj Mancha’s state-level river committee.

“We have organised this meeting to publicly highlight the sorry state of most rivers, water bodies and wetlands in the state, and to demand immediate and appropriate action from all political parties,” said Naba Dutta, the secretary of Sabuj Mancha.

Dutta claimed that around 30 to 35 rivers across Bengal have either already been lost or are in the process of being lost. “It is unfortunate that none of the parties gives any importance to this enormous resource the state harbours. Can we imagine a Bengal without rivers?” he asked.

“Illegal encroachment, rampant sand mining, 24X7 pollution, rivers in the state are being violated as a routine, often with the overt or covert support of politicians,” said Biswajit Mukherjee, a former chief law officer of the state environment department and a national award winner for environment, who was at the meeting.

Sasanka Dev of DMF pointed out that rivers needed to be protected to save the livelihoods of millions of fishermen across the state.

Dev complained that though the National Green Tribunal (NGT) had ordered the state pollution control board (PCB) to reduce pollution and restore 17 rivers, nothing had been done on the ground.

“The PCB has submitted the pollution abatement plan for all the rivers to the NGT, but has no role in execution,” said Kalyan Rudra, the chairman of the board.

“The work requires a huge budget and there is no plan about where the money will come from,” said a PCB official.

“We have got some success by mobilising the community in restoring rivers in Nadia. A ‘nodi songsod’, a decentralised network to look after the rivers, has been formed and is working well so far,” said Jyotirmoy Saraswati, from Nadia.

“Fishermen are now used to getting much less fish in the Sunderbans because of pollution in the rivers, be it plastic or otherwise,” said Pabitra Mandal, from the Sunderbans’ Gosaba block.

“Sabuj Mancha will soon approach political parties with our demands that have come up in today’s meeting and urge them to include these on their agenda,” said Dutta.