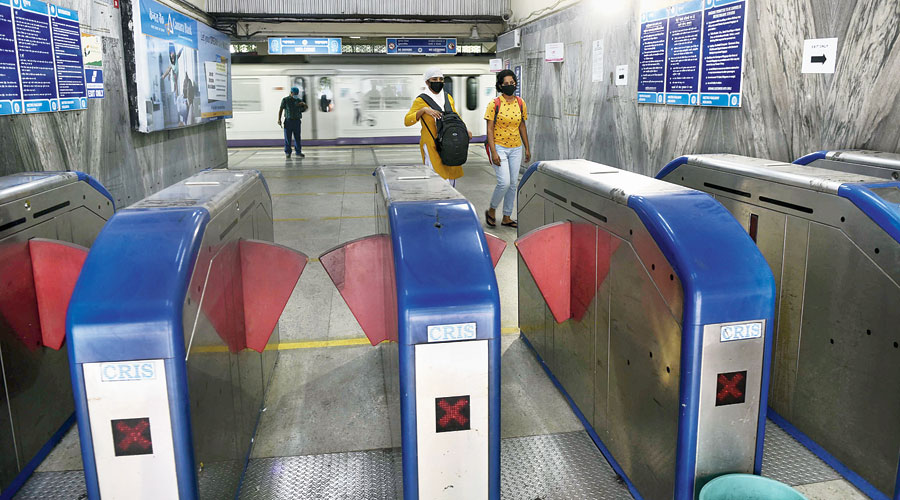 Over 2,500 e-passes for Monday were booked within an hour of the launch of the URL pathadisha.com/metro at 8pm on Sunday.

The developers said the rush was increasing and by a little after 9pm, there were “over 20 hits per second”.

In comparison, only about 1,700 passengers travelled by Metro throughout Sunday, when the carrier ran a curtailed service for NEET aspirants. The difference in the rush underscored the challenges awaiting the authorities in enforcing crowd control and social distancing measures from Monday, when the career resumes regular operations after 174 days.

Metro tried booking an e-pass from 8.10pm on Sunday but could finally book one at 8.52pm.

“Heavy traffic and poor connectivity can hamper bookings. We had not expected such a rush. When the link went live, only one server was operational. But within 30 minutes, we had to press two more into action,” said an official of the agency that has developed the technology.

The e-pass is only for entry into a station and a passenger will need a smart card to enter a platform and board a train, said officials.

New smart cards can be bought from ticket counters. Tokens have been suspended for now.

The low volume of passengers on Sunday meant smooth implementation of crowd control and social distancing protocols. But the real test will start on Monday, said Metro officials.

Calcutta Metro’s security is the responsibility of the Railway Protection Force. But the agency will have to depend on local police for crowd control, especially at the station gates.

Senior Metro officials told this newspaper multiple times over the past few days that controlling the crowd at the station gates was the key to smooth operations under the “new normal”. The agency has come up with a list of do’s and don’ts for Metro travellers.

The developers of the technology said a dynamic algorithm — based on data provided by Metro — is driving the system.

The algorithm has put a cap on the number of passengers that will be allowed at every station in a time slot. The passes are being provided accordingly. The day’s bookings have been divided into 12 one-hour slots. Based on that algorithm, around 1,000 passengers are expected to be at Dum Dum station between 9am and 10am on Monday.

During the same slot, only 25 are expected at Park Street.

An input based on these estimates has been shared with the police. “The idea is to have more deployment at busy stations,” said a Metro official.

“Dum Dum and Esplanade are expected to be among the busier stations. Local trains have not resumed yet. Otherwise, managing crowds at Dum Dum would have been more difficult,” said a Metro official.

The carrier will run 110 trains from Monday. The first and last trains will leave the terminal stations at 8am and 7pm, respectively.

“For running 110 trips, we need around a dozen rakes. The upkeep of the rakes has to be done in the daytime because there is a staff crunch at night. But we will try to run as many air-conditioned trains as possible,” said another official.

The first and only operational phase of East-West Metro, too, will resume service on Monday. But passengers on East-West Metro will not need e-passes because the “crowd is not much”. Only smart cards will be enough. There will be 72 trains every day. The service will remain suspended on Sundays.

Use specified gates for entry and exit

Listen to the announcements carefully

People with fever, cough and cold should not travel by Metro Don’t touch handrails of escalators, station pillars

More than three people should not use a lift