Adding to the problem, traffic guardrails placed in a zig-zag manner on both the roads narrow down the carriageway and increase the travel time 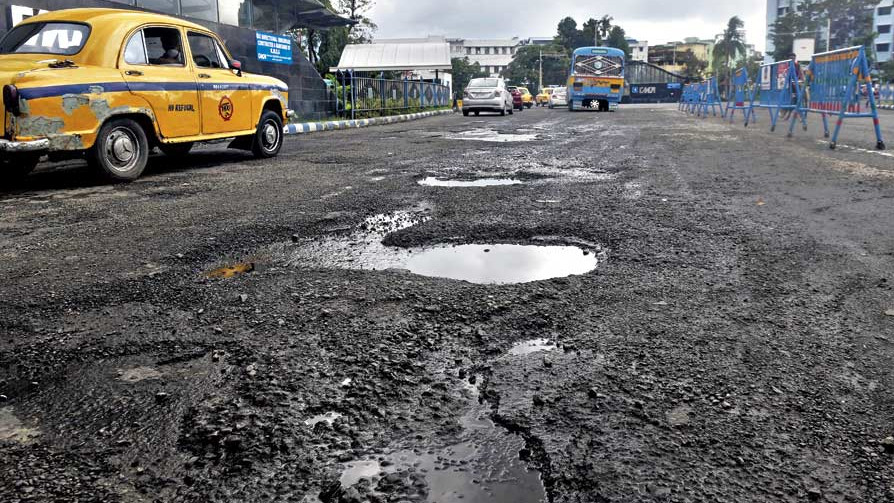 A series of potholes on VIP Road and Jessore Road near the airport is causing long traffic snarls during rush hours every day, even on days the city is under lockdown.

Commuters headed towards the airport as well as Ultadanga, in the other direction, are facing a harrowing time around the airport as the asphalt surface has worn off on both flanks of VIP Road.

To add to the woes of motorists and pedestrians alike, construction materials are stacked along VIP Road at various places, including in front of the airport’s gate number 1.

Near the airport, a combination of craters, construction materials on the roadside and bottlenecks created by traffic guardrails are triggering traffic snarls during rush hours.

It takes as long as 30 minutes during non-rush hours to travel between the airport gate number 2.5 and the point where Belghoria Expressway meets Jessore Road.

Adding to the problem, traffic guardrails placed in a zig-zag manner on VIP Road and Jessore Road narrow down the carriageway and increase the travel time.

Traffic snarls are also being reported regularly from the EM Bypass-Broadway intersection, near the Sports Authority of India (SAI) complex, as a 200-m stretch of the road is pockmarked with potholes.
Chief minister Mamata Banerjee had on Monday raised the matter of battered roads in the city and neighbouring areas during an administrative review meeting, which she and other participants attended via videoconference.

She said she had found the top coat of a road worn off on her way to Nabanna a few days ago. She also expressed concern about construction materials lying dumped along roads, blocking drains and increasing chances of flooding during the monsoon.

Metro had on August 12 reported about the poor condition of some of Calcutta’s roads. Engineers of several state government agencies had blamed the poor condition on the absence of repairs ahead of the monsoon because of the Covid-19 pandemic.
A resident of Baguiati said her husband had faced a traffic snarl around 9pm two days back and had to take a detour to reach Dunlop.

“My husband usually drives down Belghoria Expressway to reach Dunlop. However, there was such a traffic snarl near the airport that he took a U-turn and turned back to Teghoria. He then took Dum Dum Road and drove to Dunlop,” she said.

Chandan Agarwal, a Sreebhumi resident, said snarls were a regular occurrence near the airport and it was taking half an hour to reach the airport’s gate number 2.5 from Baguiati, a distance of around 5km.
A senior officer of the Bidhannagar commissionerate’s traffic wing said the width of the road near the airport gate number 1 crossing had reduced by some extent because of the ongoing construction of the Airport-New Garia Metro line.

“We have a regular deployment of traffic personnel at all hours in an attempt to keep traffic moving. However, it is a very busy area as vehicular traffic from Nagerbazar, Dum Dum, Barasat as well as from the city converges here. We have asked the agency that maintains VIP Road and Jessore Road to undertake repairs,” said the officer.

According to a plan drawn up by the commissionerate, one lane of the EM Bypass-bound flank of VIP Road is being cordoned by guardrails in the evening to make room for airport-bound vehicles. “This is being done to ensure faster dispersal during the evening rush period,” the officer said.

Another resident of Dum Dum said every spell of rain washed away some of the soil from the Metro construction site near the airport, making the road surface slippery. “My bike skidded and I fell into a pothole while riding home in the rain. I was wearing a helmet and am fortunate to have escaped with minor injuries. The authorities must do something about it immediately,” said Sunil Biswas, a resident of Dum Dum Station Road.