The letters are being sent online to the parents. Hard copies will be handed over to them later. 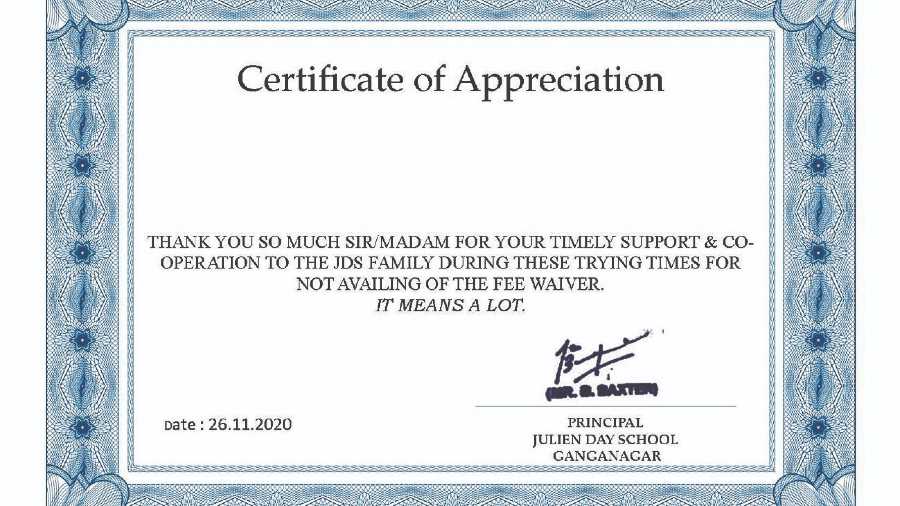 The e-certificate that parents received from Julien Day School Ganganagar for not using the fee waiver scheme
Sourced by the correspondent
Jhinuk Mazumdar   |   Calcutta   |   Published 27.11.20, 01:46 AM

A school on the northern fringes of the city has sent out letters of appreciation to the parents who have not availed themselves of the fee waiver scheme.

As many as 400 of the 1,600-odd parents of the students of Julien Day School Ganganagar have not opted for the waiver and the school has thanked them for “their support and cooperation” in such “trying times” by sending them an e-certificate.

“Thank you so much Sir/Madam for your timely support & cooperation to the JDS (Julien Day School) family during these trying times for not availing of the fee waiver. It means a lot,” said the certificate of appreciation addressed to the parents individually.

The letters are being sent online to the parents. Hard copies will be handed over to them later.

“These are hard times for the school as well as for the parents. There are some parents who did not lose out on their salaries and are not taking advantage of the waiver. At this time there are parents who stand by the school and so we appreciate them,” said Julian Glynn Broughton, the chairman of the Julien Day Group of Schools.

The idea came from the principal of the Ganganagar branch, but it will be implemented by the other three schools of the group (in Calcutta, Howrah and Kalyani), Broughton said.

Calcutta High Court had said in an order: “Parents and guardians of students are requested not to avail of the reduction in schools fees if their financial situation does not merit the reduction. However, if any set of guardians or parents obtains the benefit, no questions in such regard can be asked.”

“The school needs to give a token of appreciation to parents if they support the school in such a crisis,” said Bobby Baxter, the principal of Julien Day School, Ganganagar. “Some of the parents said their small contributions will help teachers get their full salary.”

The school has also been receiving applications for further waivers from parents who are finding it difficult to pay the revised fees because of their financial constraints.

Julien Day School, Calcutta, will soon be giving certificates of appreciation to the parents.

“Not all parents are opting for waivers…. We plan to appreciate the effort of such parents,” said Colleen Smith, the principal of Julien Day School, Calcutta, which has over 1,000 students.