PhD scholars had quit a fellowship provided by the state govt to opt for the Centre’s scholarship, which was offering four times more money than the state scheme 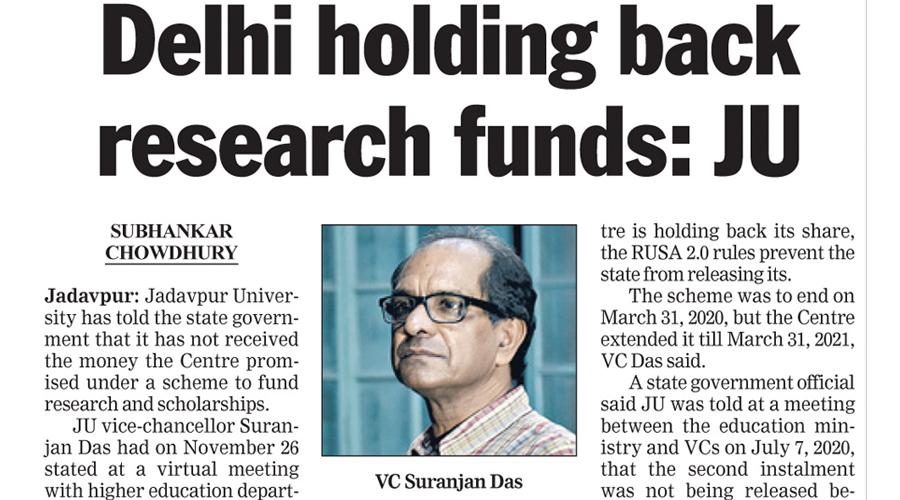 The Union education ministry’s decision to hold back the money the Centre had earlier promised Jadavpur University under a scholarship scheme has left 200-odd research scholars in the lurch.

But when JU was selected by the Centre for the scheme in December 2018, many of them opted for the scholarship under the Rashtriya Uchchatara Siksha Abhiyaan (RUSA) 2.0, which offered a monthly scholarship of Rs 30,000 for a period of two years till March 31, 2021.

Since the second instalment of the Rs 100-crore grant payable from April 1, 2020, has been put on hold and repeated pleas from the university in between have failed to evoke any response, vice-chancellor Suranjan Das has written to the state government to consider bringing the scholars within the ambit of the non-NET fellowship.

A university official said when a PhD scholar quit one scholarship in favour of another, he or she could not revert to the old scholarship at will. It requires a special consideration from the funding

At JU, after the first instalment of Rs 41.67 crore of the promised sum of Rs 100 crore had come in January 2019, the authorities gave the scholars the option of opting for RUSA scholarship. “There were a section of scholars who had two years of their research left. So they opted for the scholarship,” said an official.

In March, the Centre extended the scheme till March 31, 2021 and promised to sanction the remaining amount, said another official.

The Centre was to sanction the second instalment of about Rs 35 crore, but the release has been kept on hold and this put the scholars in a lurch.

“The non-release of the second installment of the grant has caused unimaginable distress to young scholars – working as RUSA 2.0 Fellows - who have had to bear the double burden of having to find alternative sources of income in the unprecedented situation

of the Covid-19 pandemic,” Das had told The Telegraph on January 10 .

On January 11, the university had said in a circular: “This is for the attention of the scholars who had been supported with RUSA scholarship may apply to the government of West Bengal for the remaining period of their course.”

The interested candidates have been asked to contact the university’s scholarship section with the PhD registration document at the earliest.

“I have appealed to the state government to consider bringing them within the ambit of non-NET fellowship, a scheme they were entitled to but left as they were offered scholarship under a scheme funded by the Centre. Now, the Centre is not releasing its due share under the scheme. Restoration of non-NET scholarship could help them to some extent,” Das said on Thursday.

An official said that since the department had agreed to look into the appeal, the scholars have been asked to contact.

“We don't know whether they will consider the VC’s appeal,” he said.

Although under the scheme, the Centre is to release 60 per cent of the amount and the state government the rest, but the state’s grant has to follow the Centre’s.

A state government official said JU was told at a meeting between the education ministry and VCs on July 7, 2020, that the second installment was not being released because 70 per cent of the teaching posts were vacant.