'We had to think on our feet to ensure the massive trunks did not come crashing down. That could cause damage to life and property'' 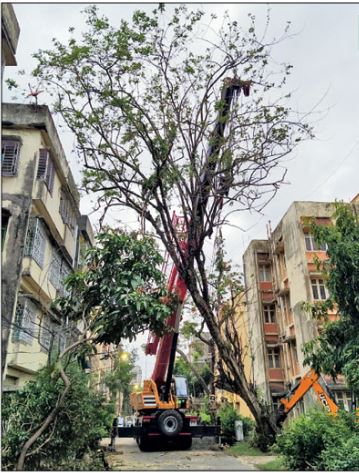 Monster cranes that helped hoist and place the deck slabs of several flyovers across the city were pressed into service to help firemen remove trees from several blocks in Salt Lake.

“We have worked on flyovers and skyscrapers before but this was the first time we were called to remove trees. We had to think on our feet to ensure the massive trunks did not come crashing down. That could cause damage to life and property,” said Tushar Jaiwsal, managing director of Jaiswal Construction Equipments that owns the machines.

At the crane’s controls sat Mohammed Farzan Hussain, a veteran of 18 years who offered Id prayers in the morning before setting out. “Although I wanted to celebrate with my family I did not think twice before coming here as it was an emergency. I have worked in construction sites across several states but never had I had to lift uprooted trees. It took all my experience to ensure they didn’t swing out of control today while men worked underneath. I was praying the whole time,” said Hussain, whose own home in Barrackpore was without power at the time.

As the cranes lifted the trees, a team of firemen prepared to slice through the branches. “It was all the more difficult as there was a maze of overhead wires,” said station officer of the Sector V fire station Sudipto Mukherjee. Sujit Bose, the state fire and emergency services minister, oversaw the operations.