Rallyists from across Calcutta, as well as from Jharkhand and Tamil Nadu, drove for nearly 250km after they were flagged off from the Country Roads Resort in Panchla 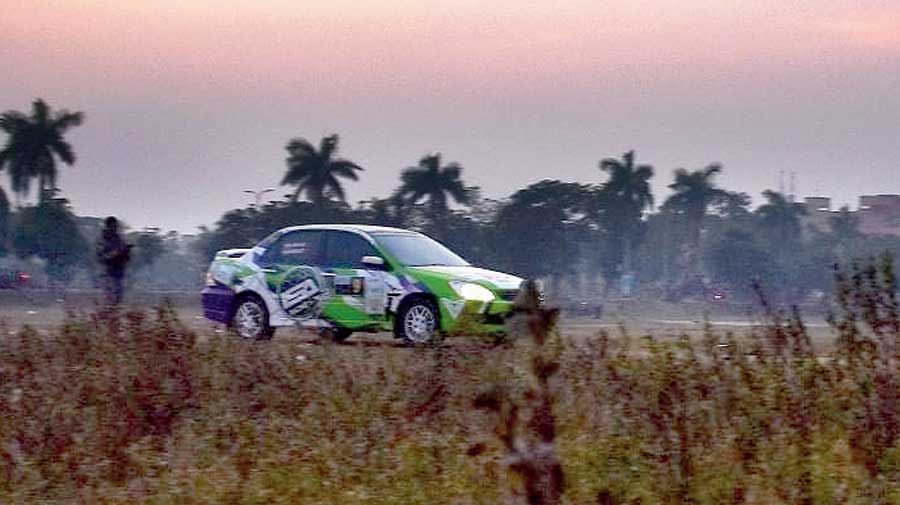 The rally season is here with Just Sportz organising their Monsoon Drive, a Time-Speed-Distance (TSD) rally between Panchla in Howrah and Haldia in East Midnapore on Saturday.

More than a dozen cars fought it out in the rally. Rallyists from across Calcutta, as well as from Jharkhand and Tamil Nadu, drove for nearly 250km after they were flagged off from the Country Roads Resort in Howrah’s Panchla. They drove around the picturesque banks of the Haldi river on the way to Haldia.

Once in Haldia, the drivers and navigators had a challenging course set on a field that had to be negotiated at night.

Unlike a speed race, the winner in a TSD rally is not the motorist who crosses the finish line first. Instead, moments before the flag-off, the navigator is handed a “tulip”, which is a booklet with directions related to distance and speed motorists need to maintain at different stages of the rally.

The team with the most accurate speed and time record wins.

A number of such events had to be cancelled since March because of the Covid pandemic.

Monsoon Drive came as a breath of fresh air for rallyists.

Joydeb Ghosh, who participated in the rally with brother Arindam on the co-driver’s seat, said they had been itching to be on the rally tracks again.

“There have been nearly no events this year in and around Calcutta. Rallying is a sport that requires continuous practice and we were cooped up in our houses. When this event was announced, we knew we had to be here,” said Ghosh, a veteran of several rallies.

For Sheikh Alivia, for whom this was the first rally, it was “quite a challenging experience”.

“It was a great experience for me and I am hooked to the adrenaline rush,” said Alivia, a resident of Haldia.

Suchandan Das, one of the organisers of the event, said that despite having nearly no sponsors, they decided to go ahead with the event simply for the love of motorsports.

“It has been a difficult year for everyone. We love motorsports and we have to keep organising events so that more and more people join this sport,” Das said.