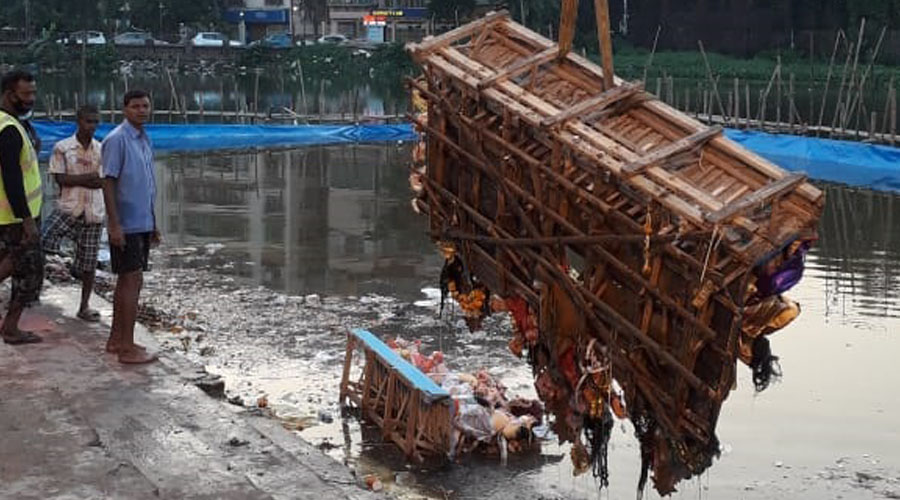 A total of 201 out of the total 500 Durga idols in the South Dum Dum municipal area were immersed this year following the green immersion norm drawn up by the West Bengal Pollution Control Board in two local water bodies in association with the civic body.

The immersion model was prodded by directives of National Green Tribunal (NGT) and National Mission of Clean Ganga (NMCG), which mandated about three years back that there should not be any immersion in the open spread of the river Hooghly and immersions should be organised in dedicated ponds.

NMCG guidelines state that “adequate arrangements should be made for designated idol immersion sites within municipal area or bank of river Ganga and its tributaries by constructing temporary confined ponds with removable synthetic liners at the bottom”. This has also been reiterated in the subsequent directive of the National Green Tribunal. NMCG recently reminded the state government of the mandate through a letter.

“The ‘idol Immersion Points’ should be cordoned off and barricaded. Synthetic liner may be placed in the bottom, well in advance” reads the NGT order, dated October 6, 2017.

“We created a model immersion system in two ponds in South Dum Dum, where immersion was organised as per the NMCG and NGT immersion guideline,” said state Pollution Control Board (PCB) chairman Kalyan Rudra on Wednesday.

PCB sources claimed that under its watch, the municipality barricaded part of the water bodies to earmark for immersion, spread out a synthetic lining below the water to arrest the deposits, regularly cleaned the floating idol structures and garbage; and no mixing was allowed with the rest of the water body by deploying sand bag buffer.

The Telegraph Salt Lake however found on October 27 that the designated immersion area in Debi Ghat was full of litter and hardly any manpower was in place. “We received a complaint on the second day and immediately made arrangements to clean the immersion zone,” said a senior PCB official.

Panchu Roy, chairman of South Dum Dum Municipality, admitted that it was difficult to stop the mixing of water between the barricaded part and the rest of the water body and shared that the system would be in place till the observance of Chhath puja. Roy pointed out that both the crane and manpower were organised to shift the idols immediately after the immersion.

South Dum Dum Municipality sources admitted that about 300 idols were immersed like earlier years in other water bodies of the municipal area with little regard to environmental norms.

“This is the first year and hence there were a few problems. We will definitely improve both qualitatively and quantitatively next year,” said a municipal official.