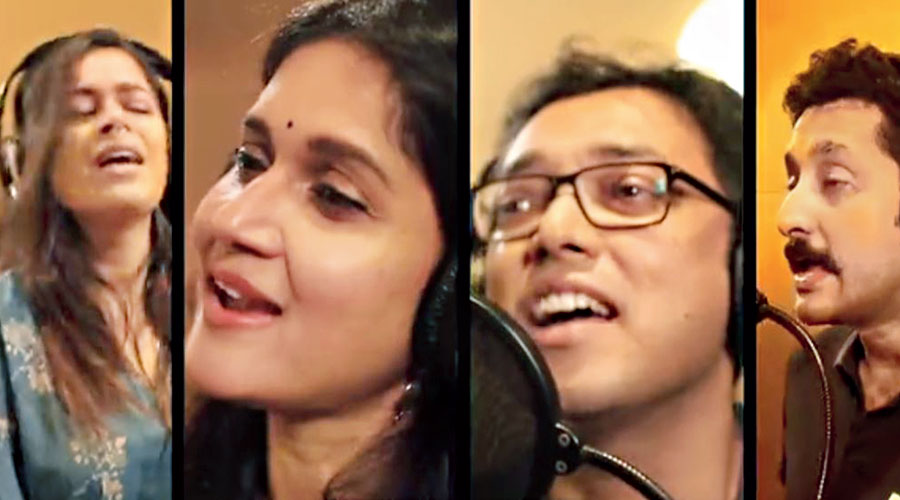 A song that speaks of equal opportunities for girls will be part of the playlist at several Puja pandals in Calcutta.

The song is part of a music video that was launched by the West Bengal Commission for Protection of Child Rights on Saturday on the eve of International Day of the Girl Child. This year the theme is: “My voice, our equal future.”

The video is a collaboration between the commission and the Unicef. Several Calcutta-based artistes and an actor-activist from Bangladesh have featured in the four-minute video. “Amio egote chai, soman amader adhikar. Chhele ar meyer taphat korona ei gota duniyai (I want to move ahead; we have equal rights. Don’t discriminate between boys and girls in this world),” goes the song.

The video shows girls — newborn, toddler, students and teenagers — in various spheres of life. A girl is seen writing alphabets in one frame. In another, a group plays cricket with elan.

“Every year, we collaborate with the Unicef to celebrate the International Day of the Girl Child,” Ananya Chatterjee Chakraborti, the chairperson of the West Bengal Commission for Protection of Child Rights, said. “We do a lot of work on the ground. But this year, the pandemic has stalled much of the work. So, we decided to make a music video with a mass appeal.”

The plan was conceived in the end of September and the video was ready in 10 days, she said. The video was shot in the Ram Bagan slum area in north Calcutta.

The music video was launched on the commission’s Facebook page on Saturday evening.

“It will be shared on social media. It will be aired on TV and radio. We have got in touch with several Puja organisers… they will play this at their pandals,” she said.

Mithila has been working with child rights advocacy in Bangladesh for over a decade now. “The song delivers a message that girls should have voices and choices. Shooting with the children was a humbling experience,”

Mithila, the head of early childhood development programme of BRAC in Bangladesh said.

A still from the music video
Videograb

Roy, who wrote the song and composed the music, said the “central theme” was “equality of opportunities”. “Our brief was clear. The song had to be simple and catchy, something that would appeal to the masses.”

Chatterjee Chakraborti and filmmaker Sudeshna Roy have directed the video. “Educating men is the key to gender equality. We hope this video reaches out to as many people as possible,” Roy, who is part of the commission, said.

“The commemoration on October 11 every year reminds us of the importance of calling upon everyone to adopt, practise and promote equal opportunities and rights for girls and boys,” Mohammad Mohiuddin, chief, Unicef office for West Bengal, said.

“The music video is an innovative and creative message, which will be disseminated as an appeal and call to all duty-bearers towards this recognition and practice,” Mohiuddin said.

The Covid pandemic has posed serious challenges in terms of increasing school dropouts and child marriages. This newspaper has reported how child marriages have been on the rise during the lockdown.