Fare double standard on auto and bus in Calcutta

3-wheelers jack up rates and are out in strength; forced to charge the same, buses stay off roads 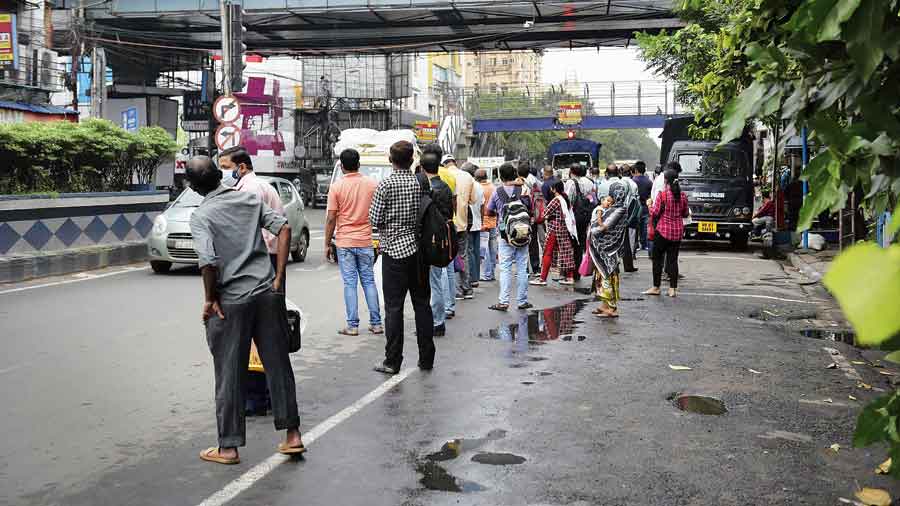 Distance between Ultadanga and Sovabazar: Around 3km

The result: Many autos and only a handful of buses hit the roads on Day 1 of resumption of public transport following relaxation of Covid curbs.

The sufferer: The “common” commuter

Traffic near the Dharmatala crossing around 4pm on Thursday.
Bishwarup Dutta

Tens of thousands of people in Calcutta and its adjoining areas depend on private buses for their daily commute. But the state government does not allow bus owners the freedom to fix fares, a privilege auto operators are entitled to.

On Thursday, auto fares on several routes were nearly double the rates commuters were charged before stricter Covid norms came into force in May.

Auto operators on the Kidderpore-Hazra route charged Rs 20 for travelling the entire stretch. The fare was Rs 12 before the curbs were introduced.

In the north, auto operators on the Salt Lake Karunamoyee-Phoolbagan route charged between Rs 25 and Rs 30 for the entire stretch, compared with the earlier fare of Rs 15.

In Bengal, 72 per cent of the buses are privately owned.

The government had on June 7 announced a three-member committee to look into the demand for a fare hike raised by private bus and minibus operators. That committee hasn't met even once.

If the government wants to hike fares, it doesn't need a committee to do so.

Many operators suspect the decision to form the committee was aimed at placating them. Between 2012 and now, at least four committees have been constituted to look into demands for a hike in the fares of buses and minibuses. Not one has come up with any specific suggestion.

In 2018, the state government had last agreed to revise bus fares.

“How many committees are we supposed to see?” asked Tapan Bandyopadhyay of the Joint Council of Bus Syndicates.

“In 1990, the then trans-port minister had formed a committee to consider fare revision. The committee had recommended that autos should ply only within Calcutta and on meter. No one paid heed to it.”

The organisation of auto operators in Calcutta has always been controlled by the ruling party of the state - first the CPM and now the Trinamul Congress.

Asked about the auto fare hike on Thursday, transport minister Firhad Hakim said: “I can't comment about autos and their fares. The government doesn’t decide their fares.”

And why no fare hike for buses? Hakim said: “The government can't decide in haste. Aaj bolley kaal ki kore hoye jabey (How can it be done tomorrow if you tell me today)? The private operators have already placed their demands with the transport department… We would like to talk to private bus and minibus operators and find out how much their operating costs have gone up because of the hike in the prices of fuel and other items.”

Unlike autos, he said, the government has a fare-chart for buses. The chart is based on stages of journey.

Auto operators said their fares for a particular route were decided by union leaders of that route.

In the existing order, whatever the auto union leaders decide is final, a system that bus owners are demanding for themselves for their survival.

Pradip Narayan Bose, of the West Bengal Bus and Minibus Owners Association, said: “The state government is not realising that given the current fuel price, only a minuscule fraction of private bus and minibus operators will roll out their vehicles over the next few days....The passenger count has dwindled and except for the morning and evening office hours, there aren't much crowds on roads. What’s the point in bringing out a bus?” he added.

Commuters were angry at the government. “They should allow a fare hike or run their own buses in larger numbers. We should not be made to suffer,” said a passenger at Esplanade, desperately looking for a bus to Sodepur.

“I had to wait for over 30 minutes at Bansdroni in the morning rush hour on Thursday. A few government buses that arrived were full,” said Niladri Roy, a private bank executive.