Decision for cycling bays in Calcutta 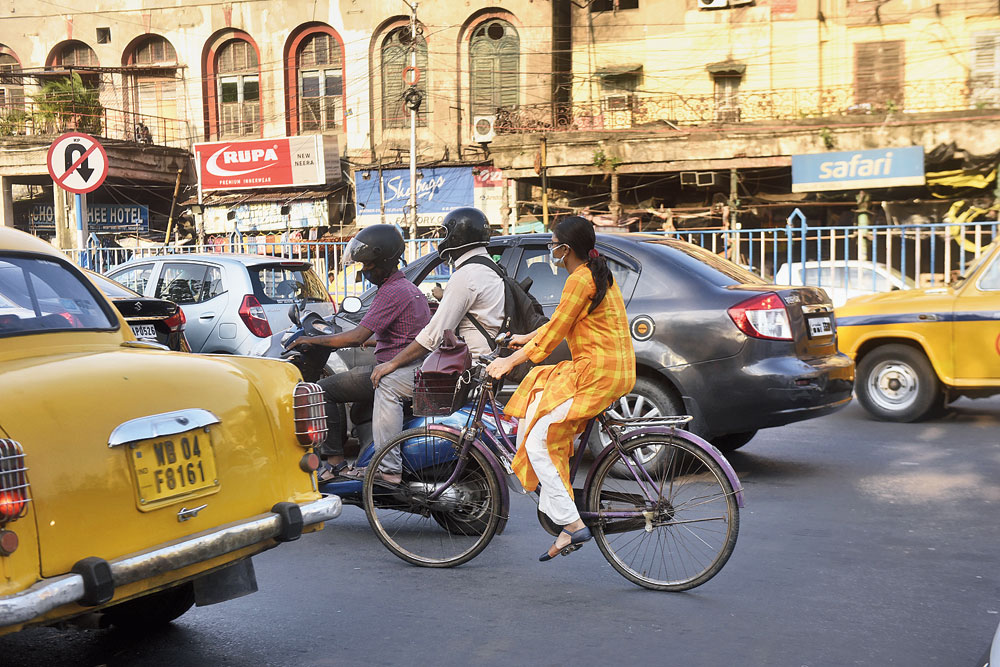 Several roads of Calcutta will have bays earmarked for cyclists, the state government has decided.

The urban development department has engaged a Faridabad-based consulting firm to conduct a preliminary survey of some thoroughfares of Calcutta where a bay can be created for cyclists. The agency will measure the arteries’ width and their traffic load and pattern throughout the day before drawing up a blueprint of how the bays can be created.

“The agency will start working on July 1 and draw up a preliminary blueprint by 15th. Officials of the transport department, Calcutta police and the Calcutta Municipal Corporation will then meet to discuss the blueprint,” said an official of the CMDA.

Urban development minister Firhad Hakim met officials of the CMDA and representatives of the consulting agency on Saturday to discuss the nitty-gritty of the project, aimed at promoting environment-friendly mode of transportation in Calcutta.

Urban development department officials said the agency had been tasked with two things. First, it will draw up a detailed plan on how to create cycling bays and how many thoroughfares are suitable for the creation of such bays. And then, it will suggest how to encourage more and more people to cycle to work and help reduce the city’s carbon footprint.

“Once the policy is drawn up, the urban development department will place it before the cabinet to issue an ordinance,” an official said.

Commuters are facing a tough time in Unlock 1 as only a handful of private buses are on the roads. Officials said that after hearing about the commuters’ plight, chief minister Mamata Banerjee felt the need to create space for cyclists across Calcutta.

On June 9, Mamata had said the government had approved a policy of allowing bicyclists on all small and medium roads in Calcutta and other major urban areas in an attempt to ease the inconvenience faced by commuters in reaching office in the absence of Metro and local trains.

She had also instructed Calcutta police commissioner Anuj Sharma to issue a notification mentioning the roads on which bicyclists would be allowed. Lalbazar has since allowed cyclists only on certain lanes and bylanes.

“Once the transport department, CMC and the Calcutta police have cleared the blueprint, the consulting firm will come up with a full report within four months on creation of cycling bays in Calcutta,” the CMDA official said. “Based on this, a final detailed project report will be drawn up.”

Calcutta has witnessed a rise in the number of cyclists since Unlock-1 started on June 1 with many commuters pedalling down several kilometres to reach offices in the central business district and parts of south Calcutta. Once dedicated bays are created along certain roads, CMAD officials said, the number of cyclists will go up further.