Advertisement
Home / West-bengal / Calcutta / Date for little ones, with grandparents in Calcutta

Date for little ones, with grandparents in Calcutta 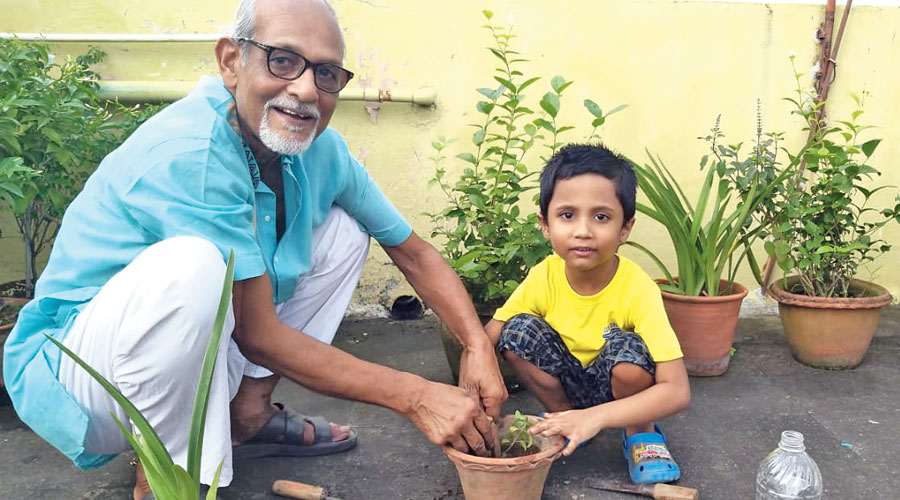 Students in the pre-primary and primary sections of a city school set the table for a dinner date with their grandparents, took out pictures from family albums and narrated stories, planted seedlings and baked cakes.

Indus Valley World School usually invites residents of old age homes to the campus to celebrate the International Day for Older Persons on October 1, but this year because of the pandemic they assigned activities to the children that would help them “bond with the elderly in their homes”.

The school sent a list of activities to the parents of children from Lower Infant to Class V, asking the grandparents and the grandchildren to choose from it and send a photograph or a small video of the chosen activity by the weekend.

“The first day of October is dedicated to the elderly the world over. Let us take this opportunity to give our little ones a chance to appreciate the importance of grandparents in their lives,” the school said in the email.

“We thought it is not only the elderly outside who need the care and attention but also the aged grandparents in the homes who want it. Children should use the time they are getting now to bond with them,” said Amita Prasad, the director of the school.

She said grandparents are hands-on in many homes and if the children do something with them, it would make the elderly feel special.

“An assignment by the school is usually taken more seriously. We hope it will be a trigger for the children to be engaged with their grandparents in a more sustained manner,” said Prasad.

They have a garden where they grow not just flowers but also seasonal vegetables. Grandmother Aditi has been tending to the garden for many years.

“My grandmother gave me instructions like how to dig the soil, when to give fertilisers and how to tend to the plant,” said Class IV student Prisha.

Those who do not have a grandparent could take an object that they associate with the grandparent and talk about it.

A Class IV student wrote a letter to his “grandfathers in heaven” and remembered the vacations he would wait for to “play and fight” with them.