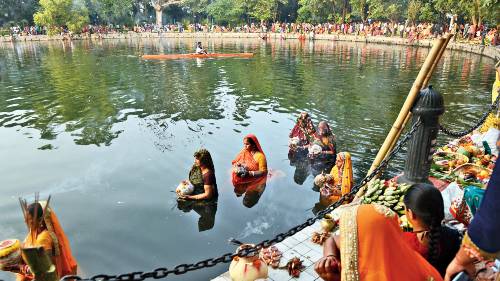 Senior officers from Phoolbagan, Beleghata and Entally police stations have started reaching out to families and organisations across eastern Calcutta reminding them of the high court order banning Chhath rituals at Subhas Sarobar.

In a repeat of what they had done ahead of Diwali — to prevent bursting of firecrackers — officers are visiting various pockets and telling residents that processions of devotees would not be allowed to head towards the Beleghata water body, off EM Bypass.

Calcutta High Court has banned Chhath Puja rituals at Rabindra Sarobar and Subhas Sarobar. It has also banned processions on the occasion and stated that only two members from each family will be allowed to perform the rituals.

Officers — from Phoolbagan, Beleghata and Entally police stations — requested residents to convince Chhath worshippers to look for alternative venues to perform their rituals.

“Our teams have been visiting parts of Oriya Bagan on Suresh Chandra Banerjee Road and Barwaritala Road and explaining that this year rituals cannot be performed at Subhas Sarobar,” said an officer at Beleghata police station. “There are ponds in and around Beleghata. Worshippers can go there.”

On Monday, a team of senior police officers visited Subhas Sarobar and also inspected the various lanes in the locality through which worshippers head for the water body.

“We have decided to place guard rails along the pathways to stop devotees from proceeding towards Subhas Sarobar,” an officer said. “We are also trying to hold talks with our counterparts in the Bidhannagar police commissionerate.” People who live around Subhas Sarobar said the waterbody, whose custodian is the Calcutta Metropolitan Development Authority, had remained neglected.

At least 13 varieties of fish can be found in the lake, an official of the West Bengal Anglers’ Association said. “There are seven species of birds in the area.” The waterbody and its surroundings, beautified in 2017 in the run-up to the FIFA Under-17 World Cup, were found littered with styro-foam trays, plastic glasses, liquor bottles and used earthenware after last year’s Chhath Puja.

The walking track was covered with garbage and polythene packets were floating on the water. Large swathes of the compound were stinking.