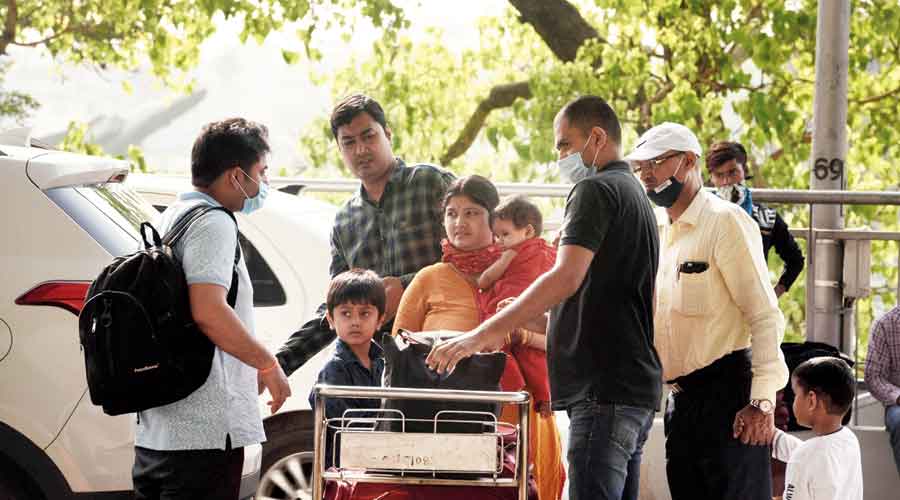 The Calcutta airport has since Monday been penalising passengers found without masks.

In the first three days of the drive, which coincides with a fresh rise in the number of Covid cases in Bengal and other states, the airport authorities asked hundreds of passengers to wear masks and fined four of them Rs 100 each, officials said.

Almost all passengers spotted without masks had the face covering in their pockets or handbags.

Public health experts and state government officials have expressed worries over the growing violation of Covid-19 safety protocols in public places. The main problem is the aversion to wearing masks.

Apart from the airport authorities, the Central Industrial Security Force, which looks after security of the airport, is involved in the drive launched by the directorate general of civil aviation to enforce the mask mandate.

“Passengers who are not wearing a mask are telling us that they felt uncomfortable wearing it. Some said they find it difficult to breathe wearing a mask for too long,” said an official of the Calcutta airport. “Almost all these passengers are keeping the masks in their pockets or handbags.”

A number of passengers without masks said they forgot to put on the face covering after entering the terminal.

Most of the people without masks are being spotted in the departure area of the terminal, where passengers spend a lot of time.

On Wednesday afternoon, Metro found many passengers entering the terminal without masks.

This newspaper reported on Wednesday that health officials and public health experts were worried about the rise in Covid cases because of rampant violation of the safety protocols at public places, including at election rallies.

Metro Railway has alsodecided not to allow any passenger without a mask at stations.

“No passenger will be allowed to enter the station premises without a mask. Punitive action will be contemplated against those not wearing masks,” said a Metro official on Wednesday.

“Despite regular announcements through the public address system asking people to wear masks, many passengers are found without one.”

No screening of reports

Many passengers arriving from cities like Mumbai and Bangalore have alleged that the airlines were not asking for the Covid-19 RT-PCR test reports before boarding flights to Calcutta.

Maharashtra, Kerala, Karnataka and Telangana to produce a negative RT-PCR report before boarding the aircraft.

The test has to be performed within 72 hours before the departure of a flight.

A doctor from Calcutta who returned from Mumbai on March 15 said: “My wife and I underwent the RT-PCR test 72 hours before boarding the flight and the result was negative. At the airport, when we approached the check-in counter, the woman at the counter said there was no need to provide the test result.

At the boarding gate, too, no one asked for the Covid test report. Same at the Calcutta airport.”

Another passenger who recently came from Mumbai said no airline personnel sought to see the report.

An official at the Calcutta airport said they were receiving verbal complaints from passengers about airlines not scanning RT-PCR reports. “However, a few others complained that airlines did not allow them to board flights without the report,” the official said.

A state health department official said they had counters at the arrival area of the airport's domestic section but checking RT-PCR reports of all passengers might not be possible because that would lead to huge queues.