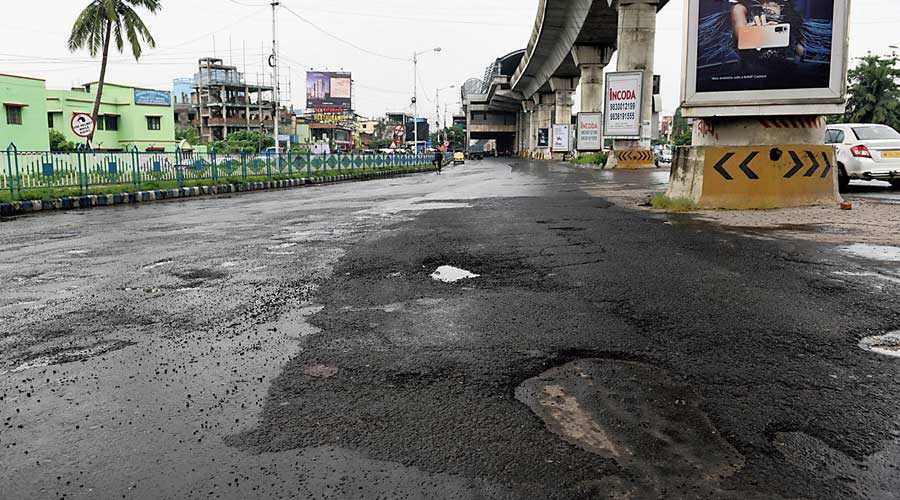 The Calcutta Metropolitan Development Authority (CMDA) will conduct a “condition assessment” of EM Bypass, which had last received a coat of top layer in 2013 and gets riddled with cracks and craters every monsoon.

The assessment, to be done by a consultant, will help the authorities prepare a blueprint for thorough repairs of the 16-km EM Bypass, which stretches between Ultadanga and Garia-Dhalai Bridge.

The study, CMDA officials said, will identify stretches where the road is undulating and spots that have become so weak that potholes appear every year despite patchwork repairs.

Every monsoon, the Bypass turns into a broken and battered road. The artery has not seen any overhaul in eight years; only superficial repairs to cover potholes were all the CMDA has undertaken.

CMDA officials said they had not launched any thorough repairs because of construction of the New Garia-Airport Metro link. “Construction of piers for the Metro viaduct damages the road surface,” said a CMDA engineer.

“The ground-level work for the Metro line along the Bypass has just ended, except at Chingrighata and Metropolitan. Only overhead work is left and that will not affect the road condition.”

A senior CMDA official said: “The weak spots the study will identify will be strengthened. The consultant that will conduct the study will suggest solutions to the various problems they will identify. The CMDA will implement the solutions before laying a fresh layer. The assessment could take between three and four months.”

Commuters prefer the Bypass, once Calcutta’s showpiece thoroughfare, to avert snarls within the city.

It was once lined by water bodies in the north and trees and fields in the south. Over the years, the snarl-free Bypass has become like any other uncared for Calcutta road.

Potholes are many, the road is undulating and trees have disappeared. Many feel Calcutta needs a bypass to EM Bypass.

“Every year, the condition of EM Bypass becomes horrible during the monsoon. There are stretches that break twice or thrice in the same season. This happens every year. Bilking down the Bypass during the monsoon, especially if it rains, is very risky,” said Chandan Banerjee, a resident of Mukundapur, who rides to his workplace in Esplanade and back.

“The northern portion of the Bypass has not seen any construction activity post-2012. That explains why it is in a better shape than the southern section,” said an engineer.

“Only a 700-metre stretch in the northern section, near Hyatt, has a Metro corridor. The ground-level work there got over by 2012. The Ultadanga-Science City corridor is in a better shape.”

EM Bypass used to turn into a battered stretch even before Metro Railway construction had started. A decade ago, the road did not have any mastic asphalt topping. A mastic asphalt coat makes the road sturdy and reduces chances of wear and tear.