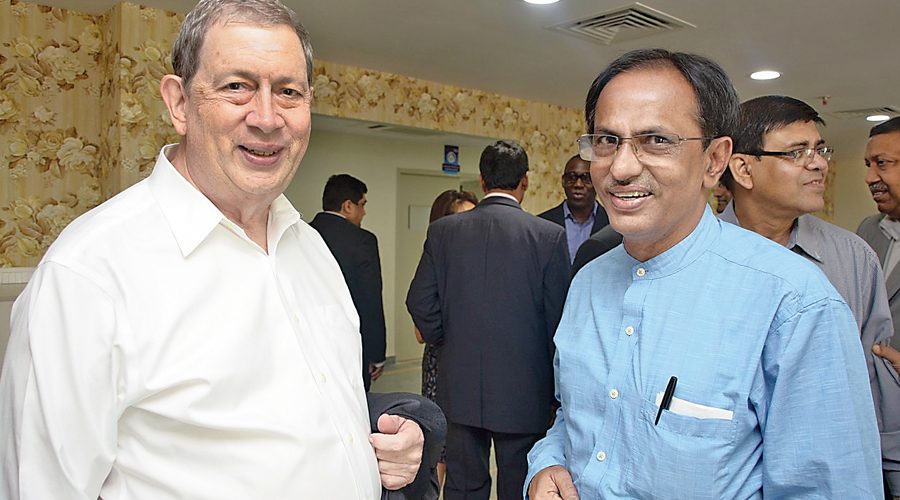 Martin with Abhijit Chowdhury after the laying of the foundation stone of the John C Martin Center for Liver Research and Innovations in 2018
Telegraph picture
Sanjay Mandal   |   Calcutta   |   Published 01.04.21, 02:25 AM

Former Gilead Sciences boss John C. Martin, who passed away on Tuesday, had a $8 million connection with Calcutta, where his money helped set up a liver hospital that caters to underprivileged people.

Martin, who died at the age of 70, was an American billionaire businessman and philanthropist who had served Gilead Sciences, a biopharmaceutical major, as the CEO from 1996 to 2016 and the company’s chairman from 2008 to 2019.

He had donated $3 million to set up the Indian Institute of Liver and Digestive Sciences at Sonarpur, on the southern fringes of the city.

He had also pledged another $5 million to build a research centre at the institute.

Abhijit Chowdhury, the secretary of Liver Foundation, which has built the Sonarpur hospital where people are treated at a subsidised rate, narrated to Metro on Wednesday how Martin had helped them build the facility.

“John C. Martin was the first big donor for the project. It was after his donation that other donors came forward to help the $5 million project,” said Chowdhury, also the head of the Institute of Liver Diseases at SSKM Hospital.

Chowdhury, who heard the news of Martin’s demise at 4am on Wednesday, said he had first met him at a conference on liver diseases in Barcelona in April 2012.

“I had walked up to him and said, Hi John, I want to take five minutes of yours to share a thought. We are planning to develop a healthcare facility for liver diseases which will be built based entirely on philanthropic donations. So, we are looking for people who could be with us and have heard you are a philanthropist. We have the knowhow and the desire but don’t have money, so if you can help us and join our venture by donating money,” Chowdhury recalled.

He had heard that Martin had supported HIV and hepatitis programmes in Africa. 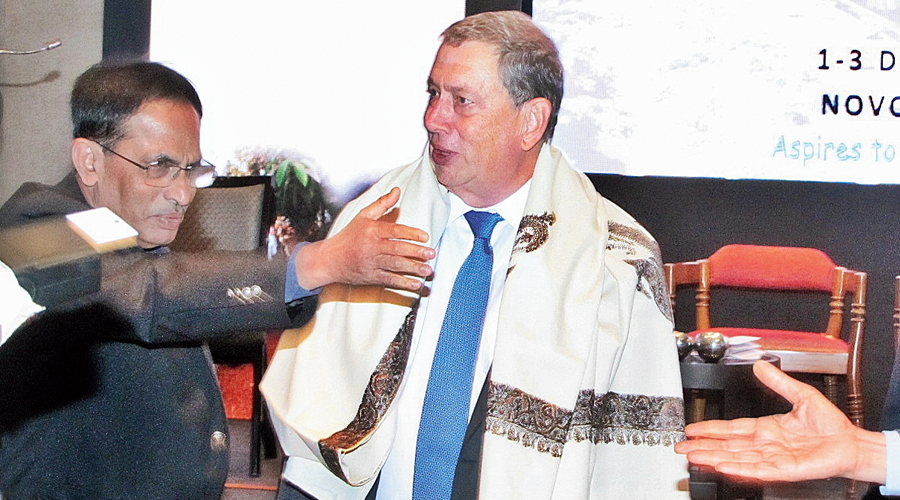 “Why five minutes? I would love to have dinner with you and let’s discuss the idea,” Martin had told Chowdhury and they had a detailed discussion about the project.

Chowdhury met Martin again in November 2012, this time in Washington DC. “By this time he had collected information about us and told me he wanted to have more discussions,” said Chowdhury.

The next month Martin had come down to Calcutta and wanted to see Liver Foundation’s outreach programmes. He and his wife Lily had gone to Birbhum. “Lily’s mother was born in Kalimpong, so she has an emotional connect with Bengal,” said Chowdhury.

In January 2013, Martin had sent a team to inspect the hospital project and a week later, he called up Chowdhury.

“John, by then John Da to me, said he was calling to say he wanted to support our project with USD2 million without any pre-conditions. He said he would prefer we didn’t tell this to many people as he didn’t want publicity,” Chowdhury recounted.

“I told him I understood his philosophy but John C. Martin’s name would add credibility to our mission. After much persuasion he agreed.”

The institute was inaugurated on February 27, 2016. Martin was present at the programme. The Liver Foundation approached Martin when the project ran into a funds deficit and he gave another $1 million in 2018. 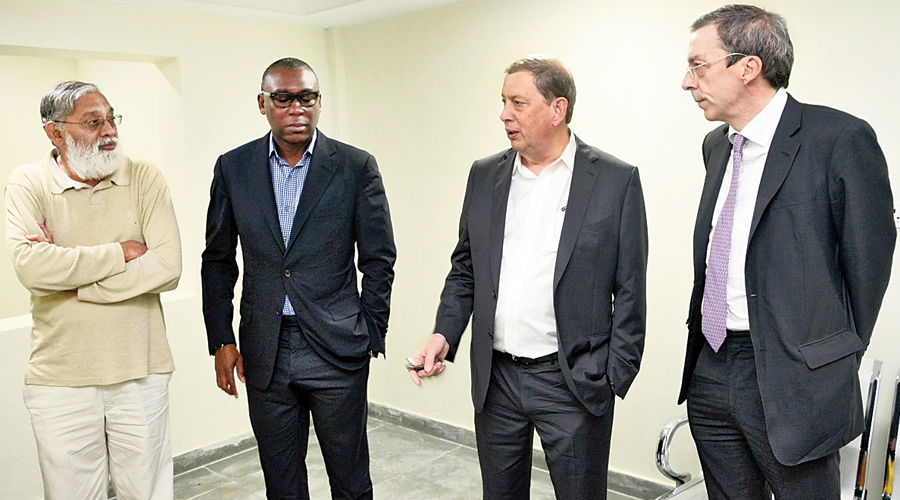 John Martin (third from left) with colleagues during the inauguration of IILDS in Sonarpur in 2016.
Telegraph picture

Liver Foundation then planned to build John C. Martin Center for Liver Research and Innovations. “He asked me why we were naming it after him. I said he was a great scientist and philanthropist and his name would give credibility to the institute,” said Chowdhury.

Martin agreed and the foundation stone was laid in December 2018. The next year he pledged $5 million for the research centre.

He loved to visit the Sunderbans and Chowdhury had taken him there twice. “He also loved Bengali cuisine and his favourite was ilish maach. He would request me to take him to a restaurant where he would get authentic Bengali food,” said Chowdhury.

Chowdhury last met Martin in February, when the Friends of Liver Foundation was founded in California. Nobel laureate Esther Duflo and Martin inaugurated the US chapter of the Liver Foundation there. Chowdhury said Martin was planning to visit Sonarpur in December.

“He would always ask me about the progress of the project. He was happy when I told him we set up a nursing college there,” said Chowdhury.