If there was no Chinese community in Calcutta, there would have been no rickshaw, no Darjeeling tea and no noodles for us. 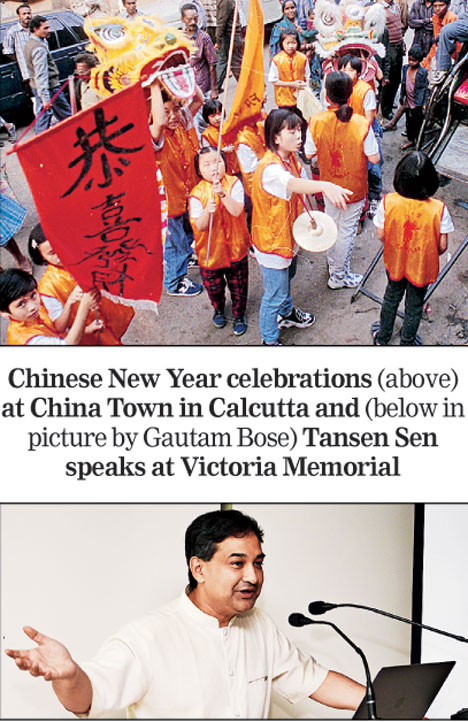 Victoria Memorial: If there was no Chinese community in Calcutta, there would have been no rickshaw, no Darjeeling tea and no noodles for us.

But the Chinese - missionaries, migrants, journalists and government emissaries - also left their written impressions of the city.

"The Chinese formed the largest migrant group from outside South Asia in the city. There were those who came to look for jobs and those who got smuggled in," Tansen Sen said.

"It was the site of opium export and of financial transactions in the late 19th and early 20th century. The Mahabodhi Society here was a transit point between Sri Lanka and Thailand, China and Tibet. Many walked from Kalimpong to Lhasa, carrying necessary commodities. All this shows how important Calcutta was to the Chinese." The professor of history and director, Center for Global Asia of New York University, Shanghai, was speaking on Chinese encounters with colonial and post-colonial Calcutta at Victoria Memorial on Thursday.

Governor General Warren Hastings initiated exchanges with China in the Qing dynasty. He sent a diplomatic mission to Tibet in 1774-75 and granted land near Budge Budge to Tong Atchew, the first Chinese trader to Calcutta, to set up a sugar mill in exchange of tea. British records show how Chinese labourers, especially carpenters, began to grow in popularity.

If Atchew did not document his impressions, Huang Maocai, sent by the governor of Sichuan in 1879, did. "His job was to check if the British planned to attack China and he created maps of the entire region from Sichuan to Bengal. He was fascinated with the railways and the telegraph as well as streetlights and tap water."

But Kang Youwei, who visited Calcutta twice in the first decade of the 20th centure and stayed at the Grand Hotel, found the streets "filthy like those in Beijing".

By the time Kang comes, there were three Chinese settlements in Calcutta - Bowbazar, Tangra and Budge Budge. Sen stressed that it would be wrong to lump the community together. "Bowbazar, housing the Cantonese, was a relatively open community. Tangra, housing the Hakkas, was gated. They did not like each other."

The next major visitor, Tan Yunshan, the founder-director of Cheena Bhavana, Visva-Bharati, described China Town as an unhygienic place of criminal activities, opium dens and "where Chinese women showcase their small feet", an euphemism for prostitution.

"But those who lived here regarded the place differently, like Kwai-Yun Li. Daughter of Hakka parents who migrated here in the 1920s and owned three shoe stores, she grew up in Chhatawala Gali and then Tangra, and was friendly with Bengali and other communities."

But the political changes in 1949, when the Kuomintang lost the civil war in China and India recognised the People's Republic of China (PRC) government, impacted the local Chinese populace.

The rise of communism or the "godless regime" impacted David and Mary Lamb, Chinese Christian missionaries who not only had to quit Shanghai but were also precariously placed in Calcutta as the Bengal government was supportive of PRC. The Lambs founded the Ling Liang Chinese Church and Grace Ling Liang English School in Tangra.

But worse was to come in 1962 with the war. As Kwai-Yun Li, who migrated to Canada and wrote of her Chinatown experience, told this correspondent during her Calcutta visit in 2008: "Fear was in the air...fear of being deported or put into Deoli."

Deoli, in Rajasthan, is where a British detention camp for World War II Japanese prisoners had been reopened "to lodge Chinese-Indians". Sen says those who had opted for PRC passports in 1949 were the first to be targeted. Many who were deported to China were settled in villages in Guanxi, Guangdong and Yunnan. "They still maintain Indian traditions like wearing sari and celebrating Diwali."

The Chinese writings, Sen pointed out, present a perspective different from British writings and deserve to be read to understand the cosmopolitan nature of Calcutta.