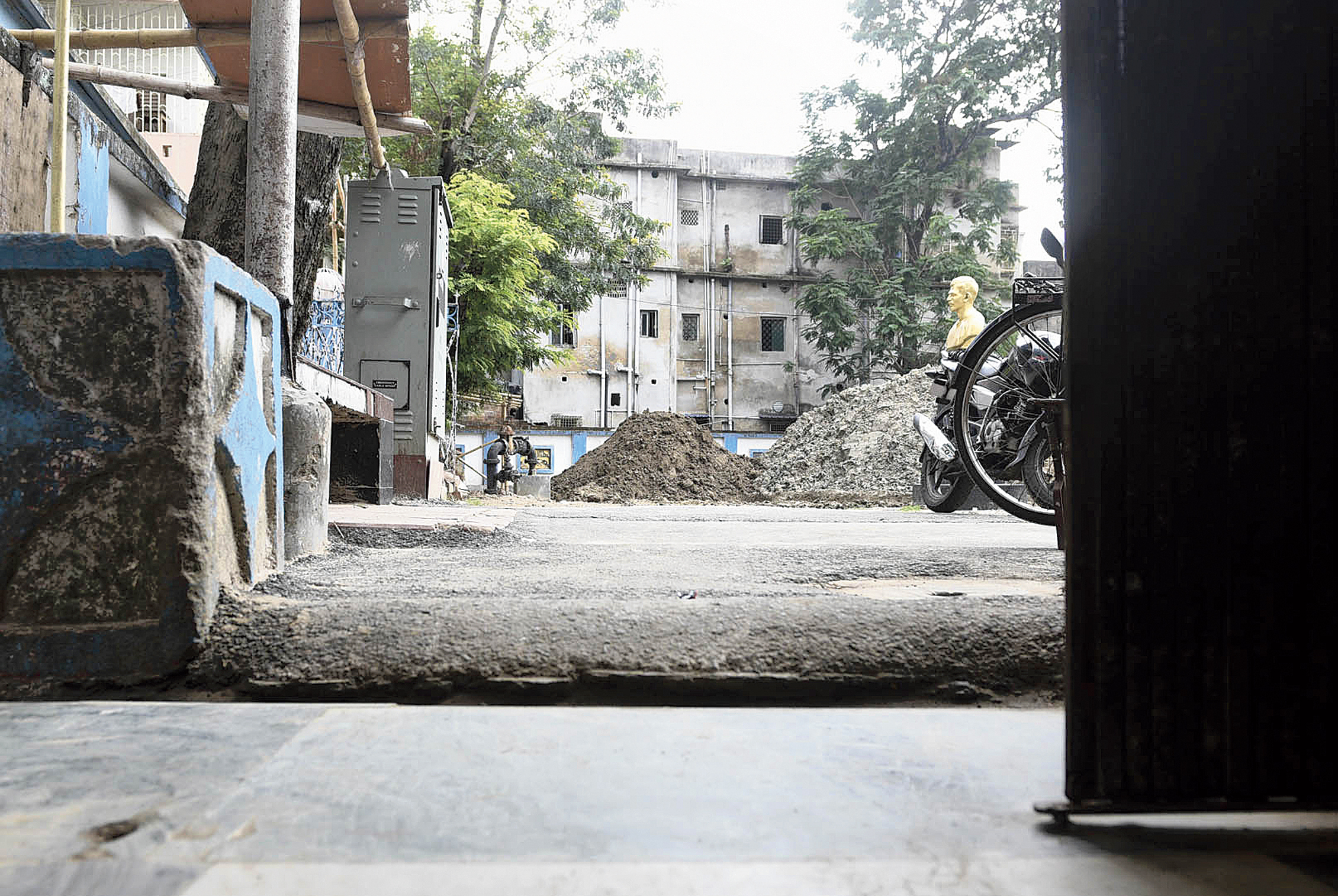 The view from the inside of a house in Dhakuria shows the level of the road is much higher than the house because of additional layers of bitumen
Subhajoy Roy   |   Calcutta   |   Published 14.04.19, 08:42 PM 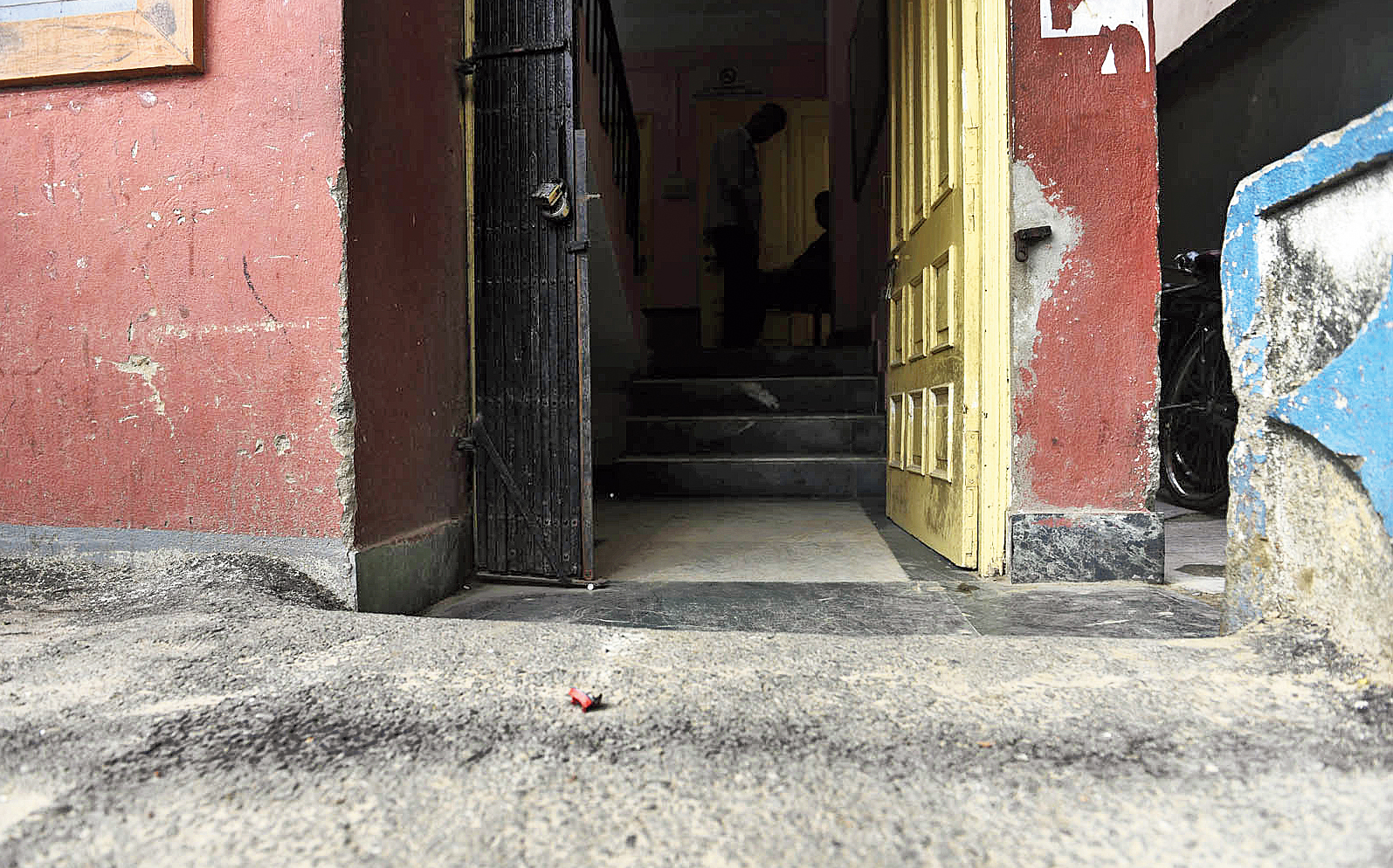 The outside of the house. Pictures by Gautam Bose
Advertisement

Large parts of Calcutta are “sinking” below the road level because of laying of bitumen layers on the roads over the years without scrapping off the existing ones.

The bitumen layers are raising the elevation of the roads, often causing them to rise above the floor level of many houses across the city, residents and Calcutta Municipal Corporation (CMC) officials said.

Metro visited two of the neighbourhoods where the road level is rising steadily — Dhakuria and Selimpur. The main door of a number of houses at Babubagan in Dhakuria is at least five inch below the road level.

Sources in the CMC said many houses in north Calcutta neighbourhoods such as Bagbazar, Shyambazar and Sovabazar were suffering the same problem. 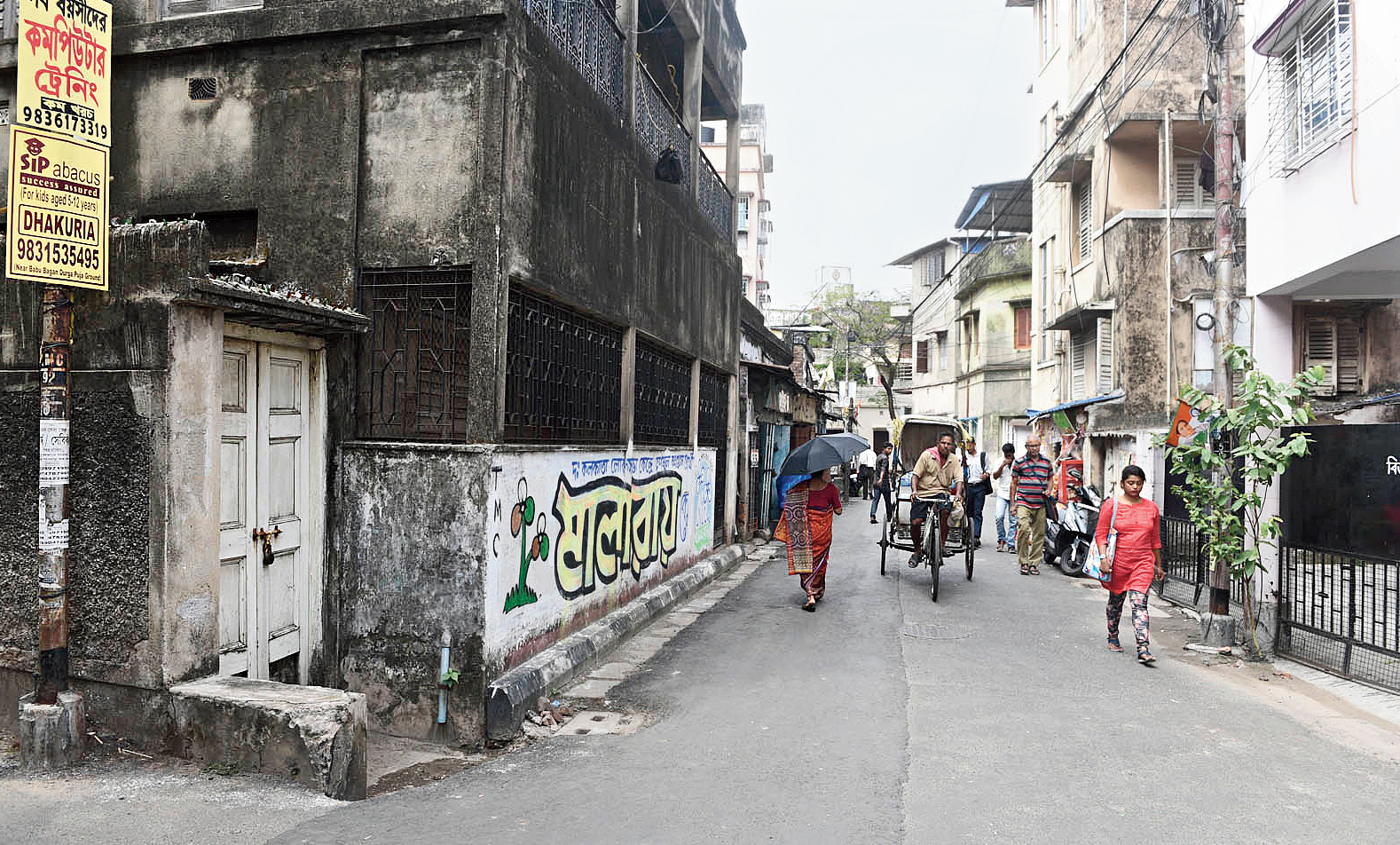 An undulated road in Dhakuria with uneven layers of bitumen. 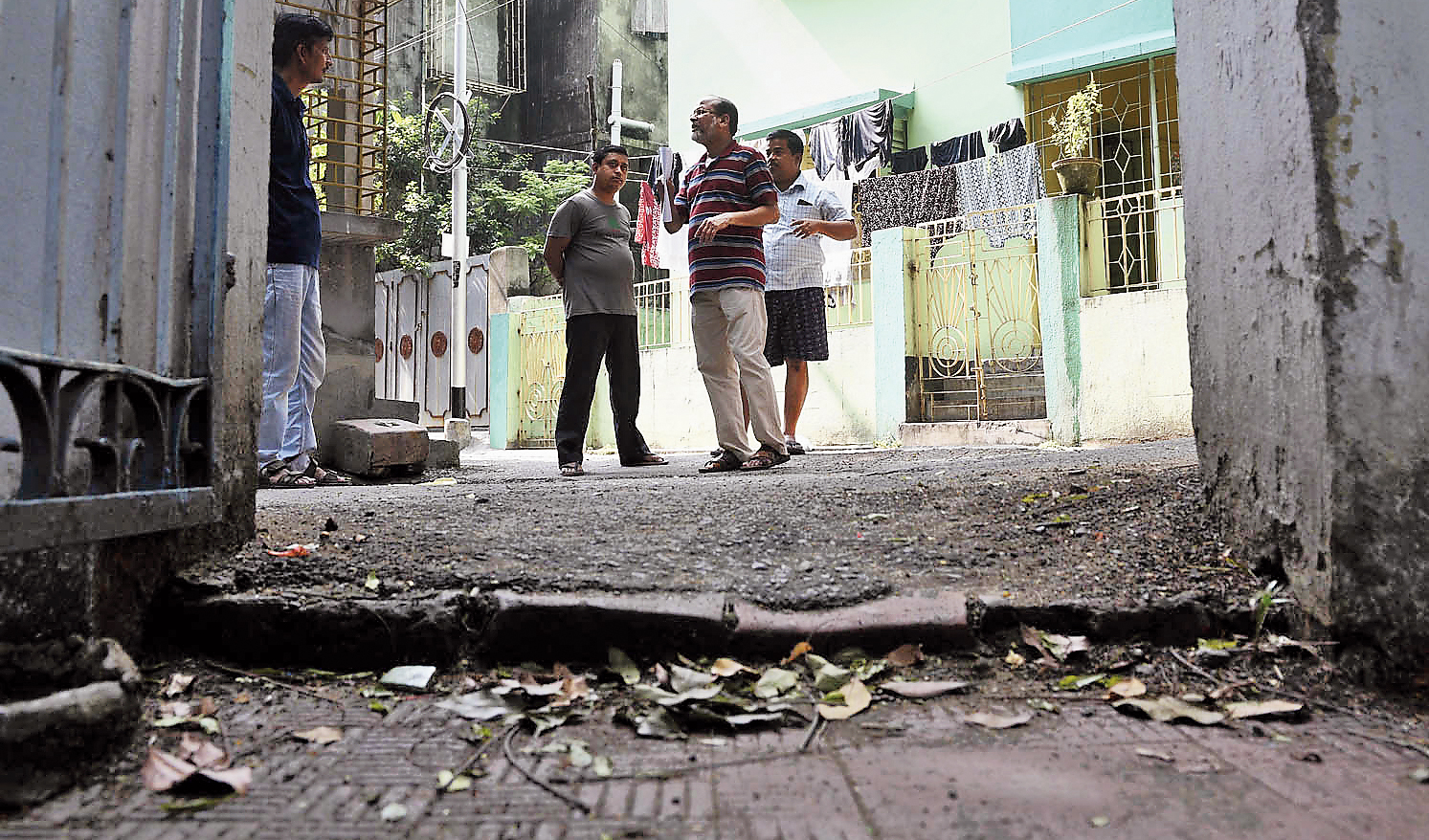 The road at a much higher level than a house.

In Selimpur’s Adarshanagar Colony, residents had stopped a civic team from relaying a road a month ago. “The top layer was never scraped off when the road was relaid. Over the past decade, the road level has risen by several inches. I had to construct a small wall at my main door to prevent water from entering the house during the monsoon,” said Narayan Kumar Chattopadhyay, a resident.

Sujit Naha, who runs his cable TV business from a ground-floor room in Adarshanagar Colony, said his office would get flooded every time it rained heavily.

Naha expressed the fear that if the road in front of the building was relaid again, the gate of the compound could not be opened.

“There is hardly a 4cm gap between the road and the gate. If a layer of bitumen is again laid on this road, the gate will be blocked,” he said.

A civic engineer said each bitumen layer was about 3cm thick. The thickness on some stretches could be even more if the bitumen is not rolled properly.

Residents of the neighbourhood have written to the civic authorities with the request to ensure that the top layer is scraped off before another layer is added.

A resident of New Garia said the road in front of the 1B bus stand had recently got a layer of bitumen, which resulted in a rise in the height of the thoroughfare.

Across the city, house-owners are raising the height of their ground floor or erecting a concrete barricade at the main gate to prevent water from flowing in. 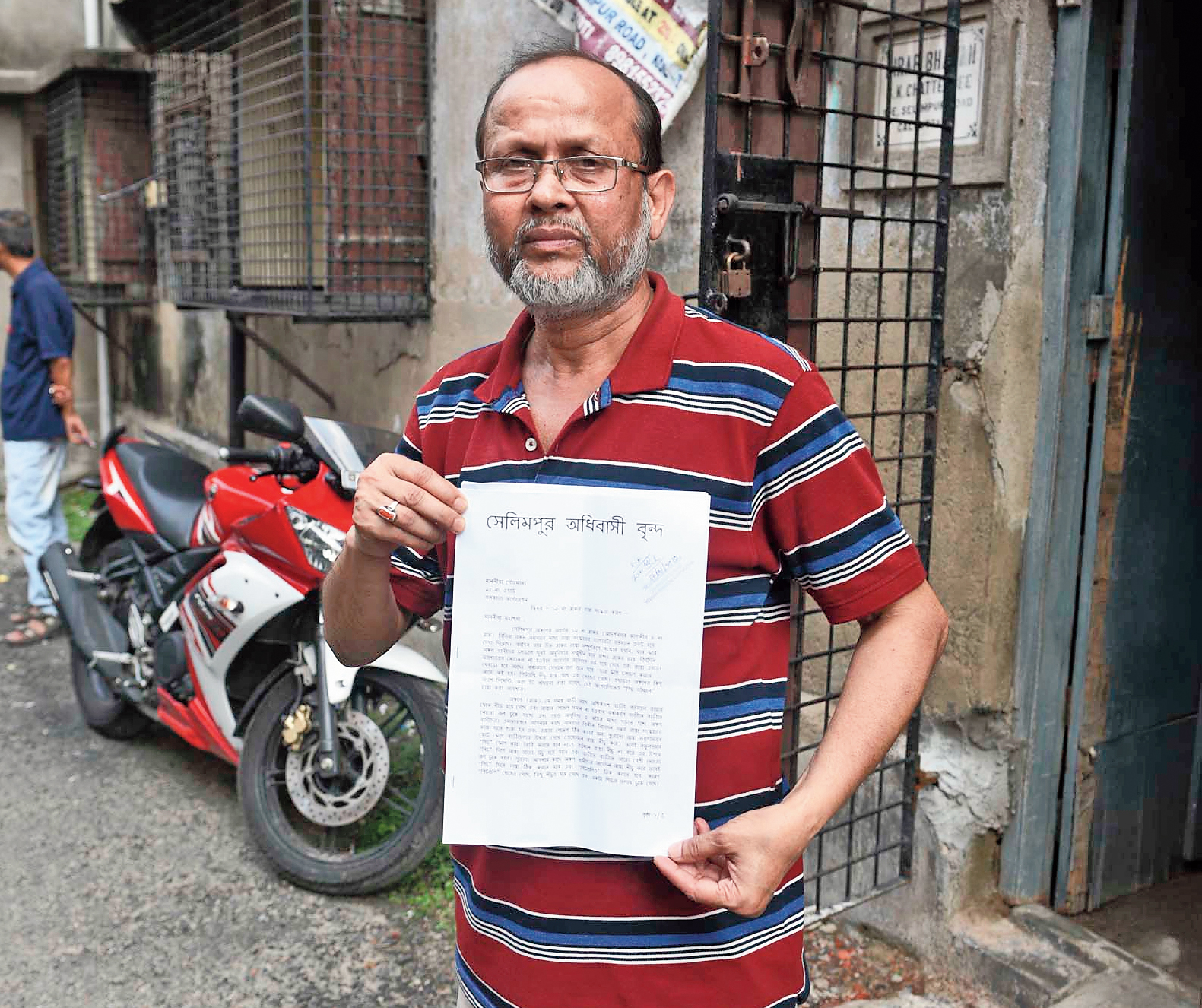 The top layer was never scraped off. In the last decade, the road level has risen by several inches. I had to construct a small wall at my main door to prevent water from entering my room during the monsoon Narayan Kumar Chattopadhyay resident, Selimpur
Pictures by Gautam Bose

“All cities in India face the problem. Ideally, the old bitumen layer should be scraped off before a new layer is laid,” said Sangeeta, chief scientist and head of flexible pavement division at the Central Road Research Institute in Delhi.

Civic engineers said the two milling machines the CMC had bought to scrape off bitumen layers were far from enough given the pace of road-relaying work.

Mayor Firhad Hakim had said last week that two more milling machines would be bought. He made the statement while replying to a question from the leader of Opposition in the civic house, Ratna Roy Majumdar.

The machines, which have a 1m-wide blade each to scrape bitumen, are usually deployed on major thoroughfares. “The machines cannot work on roads narrower than 12ft. They need some space to manoeuvre,” an engineer said.

The problem of rising road level is set to persist because the new milling machines, civic officials said, will be of the same width as the existing ones. “Unless smaller machines that can work on narrower roads are bought, the problem will remain,” an engineer said.

Sangeeta pointed out the scraped bitumen could be recycled.

“It can be mixed with some fresh bitumen for reuse. This saves a lot of material. Also, it can be reused at the same site with the help of cold technology that will not emit smoke,” she said.

Apart from milling machines, jackhammers are used to remove bitumen from road. “But the problem with jackhammers is that they remove a lot of soil, too,” a CMC engineer said.