Dhapa, where Calcutta’s waste is being dumped since the late 1980s, predates the concept of engineered landfills 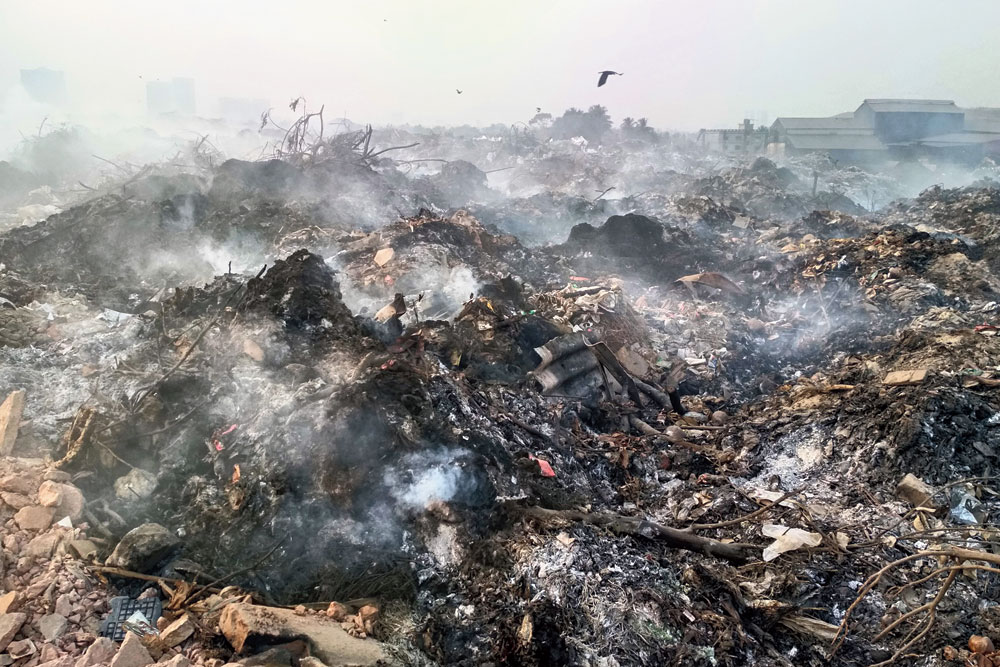 The Dhapa dumping ground has been burning for nearly a month and the thick smoke billowing out of the site is making the city’s polluted air even more toxic.

The Calcutta Municipal Corporation has written to the pollution control board to help it take measures to contain the emission without closing the dumping site.

Scientists, environment engineers and engineers of the Calcutta Municipal Corporation (CMC), custodian of the Dhapa ground, said methane gas could catch fire if it came in contact with atmospheric oxygen. Methane is present in abundance in the food waste dumped at the site.

Open landfill sites (Dhapa is one), where methane is not collected and drained out in a scientific way through a network of pipes, were banned in the country in 2000.

Since Dhapa predates the ban, it has not been closed down.

The authorities, however, did not rule out the possibility of a ragpicker or someone else throwing a lit match or cigarette or bidi-end into the garbage.

“We have written to the West Bengal Pollution Control Board seeking their advice on how to stop the emission of smoke, which has been continuing for around a month. We cannot close the site as it is the only place where waste from the city is dumped,” an engineer at the CMC said.

“We have received the CMC’s letter. Our solid waste management department will deal with the matter,” an official of the board said.

The Dhapa site, where Calcutta’s waste is being dumped since the late 1980s, is filled to the brim. “A part of the site has been closed as it is saturated. The 35-hectare land that is still in use is full, too,” the engineer said.

Civic officials and engineers said they had been scouting for a new dumping site for several years but were yet to come across one. Unlike Dhapa, the new facility will be an engineered landfill site where the methane trapped in food waste will be collected and disposed of through pipes. That will reduce chances of fires at the site.

Sources at the CMC said fires at Dhapa — flames are hardly seen but smoke emits continuously — are common during winter.

“Rain keeps the waste wet during summer or the monsoon. So, fires are not common during those two seasons. The dry weather during winter is favourable for fire in the dumped waste. This is not the first time such a fire has broken out at Dhapa,” an engineer said.

An environment engineer working for a central organisation echoed the CMC engineer but added that the civic body should have readied an emergency plan on how to control the fire.

“It is known to everyone that open landfill sites are susceptible to fires. Why doesn’t the CMC have an emergency plan?” wondered the engineer working for the central agency.

The smoke emitting from the waste contains carbon dioxide, carbon monoxide, sulphur oxides and nitrogen oxides. It is also rich in PM2.5 and PM10, tiny pollutants that enter the deepest crevices of the lungs and can trigger a host of respiratory diseases.

“The city ranks high in air pollution. This constant emission of smoke from Dhapa is further aggravating the situation,” said a Calcutta-based environmentalist.

Metro went around the dumping site on Wednesday and saw people living in nearby villages burning plastic, thermocol and metal wires, all of which were generating a good amount of smoke.

“Some villagers told me that a group of people regularly burn wires to extract the metal, which they sell,” said Arka Sarkar, a nature conservation worker.

Several environmentalists said the dumping ground run by Baranagar Municipality, which can be seen from the Belghoria Expressway, is in a worse state.

“The smoke at the Belghoria site is far more than at Dhapa. The stench of the smoke hits you from a distance,” said an environmentalist.