Several people who were engaged in the fight were detained, the police said 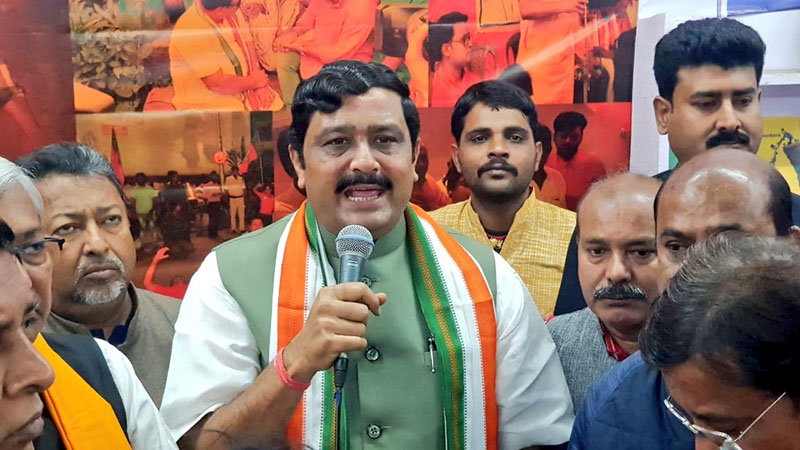 A woman police officer was thrashed by a group of women at Bidhannagar (north) police station on Saturday evening, shortly after police detained a group of youths from Calcutta Book Fair.

A little after 4pm, one of the gates of the fair had to be closed for about an hour when a group of youths, seeing BJP national secretary Rahul Sinha at the fair, started shouting slogans against the Citizenship (Amendment) Act.

A scuffle broke out between the youths and some suspected BJP supporters who were near the party’s stall at the fair in Central Park.

The fight triggered panic at the fair and cops detained several people and took them to the police control room in the fairground and then to Bidhannagar (north) police station. All were released at night.

A video footage emerged in the evening where the officer in uniform can be seen being scratched on the face, dragged by the hair, pushed and showered with punches and blows by a group of women.

One of her male colleagues can be seen trying to disperse the agitators and pull the officer away from the crowd.

A separate case regarding the assault on the officer will be drawn up, the police said. “This is unacceptable. No one can hit a police officer…. This is more shameful because a woman was beaten up inside a police station,” an officer said.

Although there was no official confirmation on the identity of the protesting youths, the police said they were students of various universities.

They had been protesting against the citizenship matrix introduced by the Centre.

Allegations of assault and harassment emerged against suspected supporters of the BJP and the VHP. “VHP workers attacked us while we were distributing leaflets at the book fair. They have beaten many of our senior members,” a member of the Jatiyo Bangla Sammelan — an anti CAA forum — alleged.

Shubhadeep Ghosh, a graduate from Jadavpur University, alleged cops and BJP supporters had thrashed him and others when they wanted to know why five of their friends had been detained.

Cops had rushed to the spot near Gate No. 7 and cordoned off the place to create a safe passage for Sinha to leave the venue. Sinha later said: “It was only an attempt to get highlighted. But we are not going to pay any heed to such attempts by these people to hog the limelight. So, it is useless to comment on the matter.”

A woman from Patuli, who was at the fair with her nine-year-old daughter, termed the incident “shocking”. “I have been visiting the book fair for years. I was scared to see such violence and so much of politicisation at the fair.”

The fair started on January 29 and it will end on Sunday.

A group of people gathered around Jadavpur police station and blocked Raja SC Mullick Road at night to protest “police atrocity” at the fair.