As the car went past several large water bodies along the Ring Road, the driver lost control of the vehicle while taking a turn 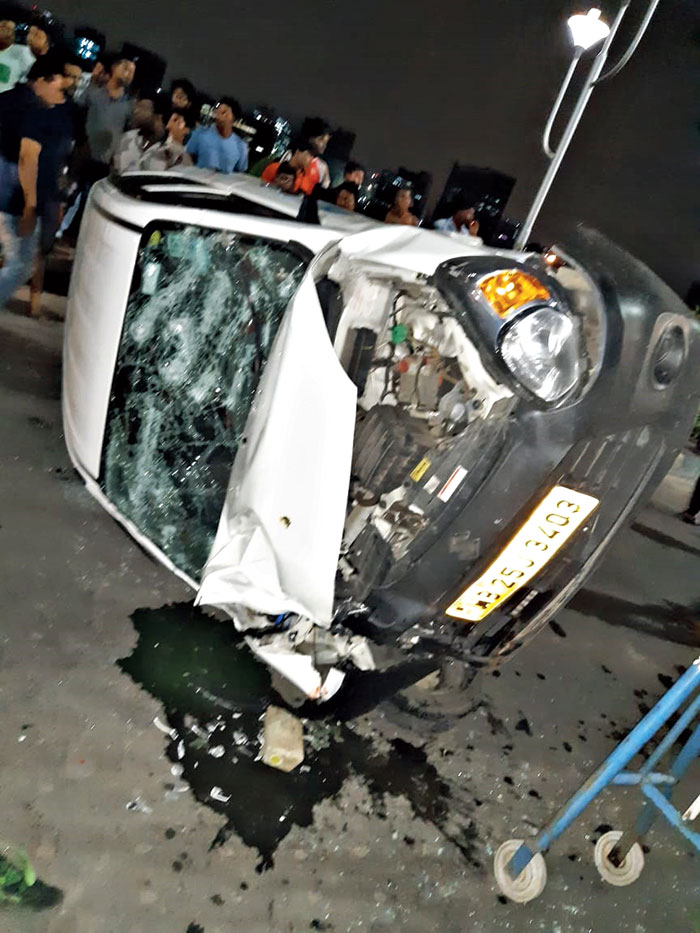 An app cab headed towards Mahisbathan behind Sector V hit a bicyclist and two women, who were standing on the pavement, before ramming into a roadside kisok on Ring Road late on Thursday, police said.

According to an officer of the Bidhannagar Commissionerate, the cab had picked up passengers from Sector V and was headed towards Mahisbathan. As the car went past several large water bodies along the Ring Road, the driver lost control of the vehicle while taking a turn.

“The car first hit a bicyclist and then the two pedestrians before ramming into the shop,” said the officer.

The police have identified the women as Sudha Mondal and Moumita Nandi. Both the women and the cyclists are residents of the area, the police said.

All of them were taken to the Salt Lake sub-divisional hospital in DD block around 5.3km from where the accident took place.

“The women had suffered injuries on their legs. While Sudha needed five stitches, Moumita had suffered a fracture,” said a doctor who had treated them at the hospital.

Sourav said he was sitting in his shop when he heard a loud noise and suddenly saw the car coming towards him.

“I barely managed to jump out of harm’s way. The car rammed into a wooden table and ran over several utensils,” Sourav said.

Residents of the area helped the three passengers and the driver of the Maruti Suzuki Alto to come out of the vehicle.

Once out of the car, the angry passengers began to slap and shove the driver. A group of local residents rescued the driver and took him to a local club. The local residents then staged a roadblock in the area till a team from the Electronics police station reached there. They were protesting against the incident of rash driving.

“We rescued the driver and took him to the police station. He claimed that there was a mechanical failure in the vehicle because of which he lost control of the car,” the officer said. Officers have found out that the car has been purchased barely a year ago.

The officer said a case had been lodged against the driver under various sections of the Motor Vehicles Act, 1988.

He added that the vehicle would undergo a mechanical test to find out the reason for the accident.

The test will be conducted on Friday and the driver has been asked to be present during the test, he said.

“No one has lodged a complaint against the driver,” the officer added.

In April this year, an app cab driver had died after he rammed into a stationary truck parked along VIP Road.