The attack occurred around 11.30am when junior doctors were demonstrating at the hospital’s emergency gate 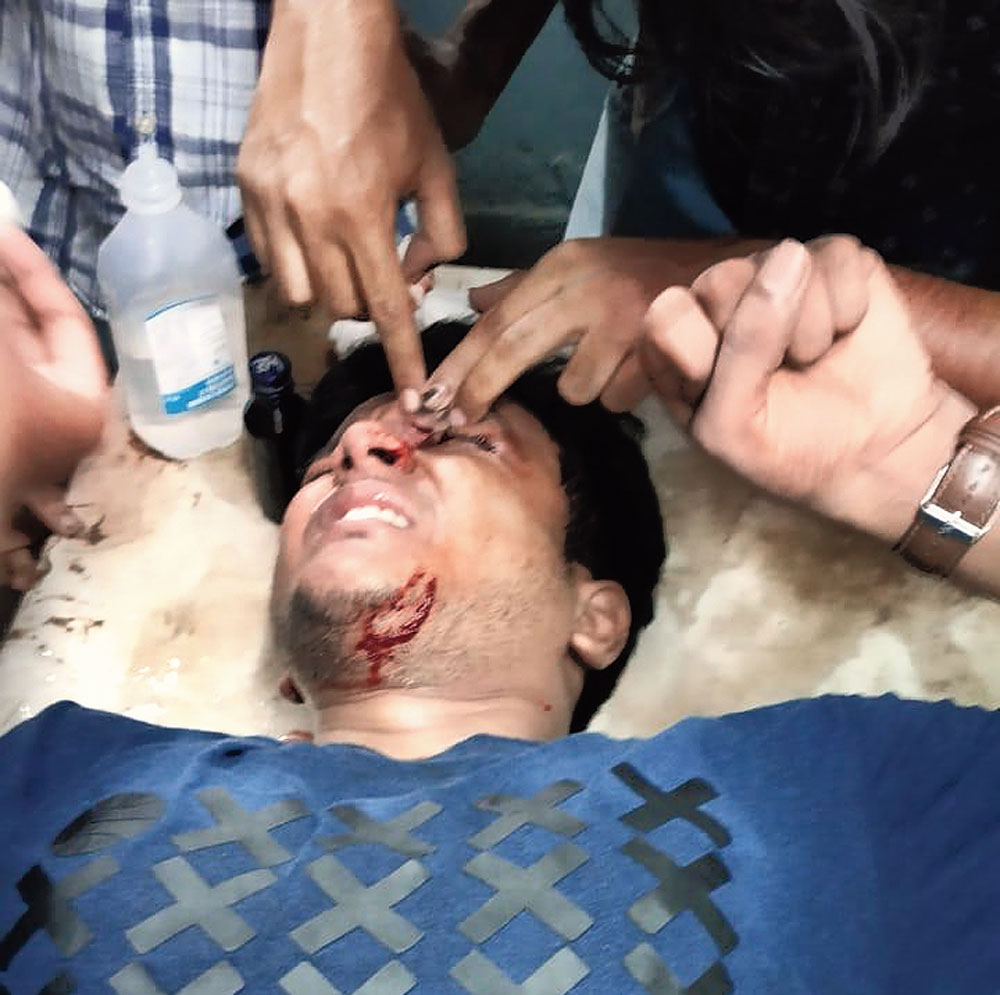 Mayank Agarwal, the fourth-year medical student, who was injured in the attack at Burdwan Medical College and Hospital on Wednesday
Picture by Anirban Hazra
Abhijeet Chatterjee   |   Burdwan   |   Published 13.06.19, 02:30 AM

Three junior doctors and a fourth-year student of Burdwan Medical College and Hospital were injured on Wednesday when relatives of patients and outsiders lobbed bricks at them.

The attack occurred around 11.30am when junior doctors were demonstrating at the hospital’s emergency gate as part of a statewide ceasework at OPDs to protest the assault on two NRS doctors.

Mayank Agarwal, a fourth-year student, suffered serious injuries and had to be admitted to the hospital, according to hospital authorities.

A brick hit him in the left eye and he was kicked and punched in the face. The three junior doctors sustained minor injuries.

“Mayank has got three stitches in the eye. He has undergone a CT scan,” Amitabha Saha, deputy superintendent of the medical college and hospital said.

“Some internal injury in the eye has been detected. He is being treated in the eye department,” he said.

A large group of relatives of patients were stopped by the protesting doctors and forced to return.

“Initially, a scuffle broke out between the junior doctors and the relatives of patients. It soon snowballed into a clash,” a hospital official said.

The hospital authorities on Wednesday made frequent announcements over the public address system alerting patients that the OPD was shut because of a ceasework by junior doctors.

The OPD sees about 5,000 patients every day on average. At least 1,300 patients are admitted to various wards currently. Their treatment was not affected.

At least 1,380 junior doctors and medical students began a sit-in at various places on the complex, including at the emergency gate, since morning.

“We were on a peaceful dharna when some people started hurling bricks at us. They threatened to hurl acid bombs at us. We were feeling insecure,” Niladri Kayal, an agitating junior doctor, said.

Policemen present on the camp inside the hospital intervened and tried to disperse the mob but were outnumbered. Some media photographers were roughed up by the mob and some of the agitating junior doctors.

The junior doctors apparently chased the mob, lobbed bricks and thrashed them with bamboo sticks.

“We were attending an emergency meeting of the college council when we learnt that some outsiders had attacked the agitating students and junior doctors at the emergency,” said Saha.

Saha, along with medical superintendent and vice-principal Utpal Dawn, reached the spot and alerted the police. Dawn was caught between the warring groups of junior doctors and was apparently manhandled.

A large police contingent, led by additional superintendent of police Priyabrata Roy, reached the spot and chased the mob away.

The relatives of patients alleged that junior doctors had misbehaved with them and drove them out.

“I had a surgery last week. I came here today to have the stitches removed at the OPD. The junior doctors forced us to leave. They asked us why we came when they had announced a ceasework,” Suktor Sheikh, who came from Murshidabad, said.

The junior doctors, however, denied the charge. “Our agitation was peaceful and we did not harass anyone. The hospital authorities announced that the OPD is closed today (Wednesday),” said a junior doctor.

In West Midnapore, families of patients blocked the main road in front of Midnapore Medical College for an hour on Wednesday morning to protest the doctors’ ceasework.

In Nadia, OPD and emergency services were completely suspended at the Jawaharlal Nehru Hospital and Kalyani College of Medicine as well as at Gandhi Memorial Hospital in Kalyani as senior doctors supported the ceasework by junior doctors.

Surgeries were not carried out at the hospital.

Avijit Mujherjee , medical superintendent of Jawaharlal Nehru Memorial Hospital and Kalyani College of Medicine, said: “Services were largely hampered at the hospital. But, the treatment of those admitted to the hospital was normal.”

In the evening, 400 students, interns and doctors walked in a silent procession in Kalyani town condemning the attack on their colleagues at NRS.

In Krishnagar, doctors stayed away from the OPDs at the district hospital and at Sadar hospital but attended emergency without disrupting services.

Doctors stayed away from the OPD of Murshidabad Medical College and Hospital but provided services at the emergency department.

With additional reporting by Subhasish Chaudhuri and Anshuman Phadikar