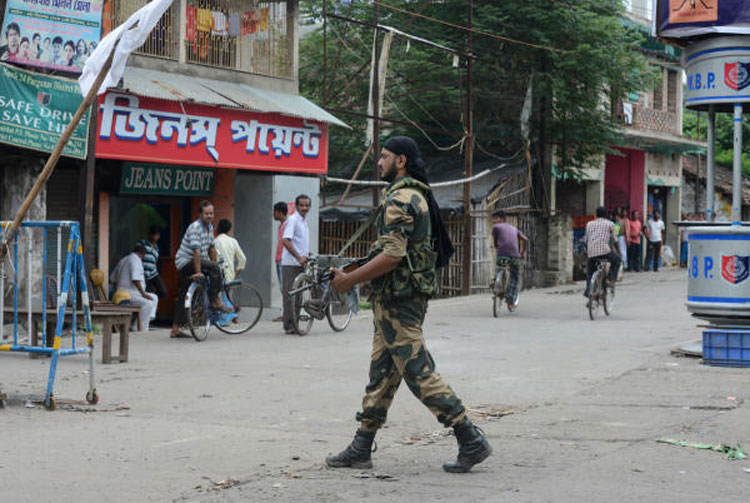 A company of a Border Security Force is set to arrive in Calcutta on Friday to identify “vulnerable” pockets in the city and its adjoining areas ahead of the Lok Sabha elections, police officers said.

The two constituencies in the city — Calcutta North and Calcutta South — go to the polls on May 19, along with a few other adjacent seats such as Jadavpur, Dum Dum, Barasat and Diamond Harbour.

Poll watchers in Bengal failed to recount another instance of an “advance party” of a central force starting preparatory work two months before the elections.

The “advance party”, which will be under the direct supervision of the Election Commission, will be led by a commandant and have 120 personnel drawn from along Bengal’s border with Bangladesh.

Officers said the team was likely to camp in Alipore.

The officers said the BSF team would have enough time to have a clear understanding of the area that would have to be “dominated” during the elections.

“According to what we know, the BSF personnel will collect information about pre-poll and post-poll violence during the last elections and make a list of vulnerable pockets. Then they will make rounds of the vulnerable pockets,” an officer said.

During these rounds, the paramilitary personnel will contact local police stations to know about “sensitive” and “super-sensitive” booths. They will also gather intelligence on their own.

Police sources said booths were classified as sensitive super-sensitive based on parameters such as history of violence, vulnerability of voters, location of a booth and number of voters in that booth.

Some officers said the BSF team would make a video of their rounds.

The commandant leading the company would be in constant touch with senior police officers.

“Having a team of a central security force make rounds much ahead of the polls is a confidence-building measure,” a senior police officer said. “The mapping of the vulnerable zones and the intelligence inputs would come in handy when more forces would be deployed.”

Throughout Wednesday, senior officers of the Calcutta police remained busy making arrangements for the accommodation of the BSF personnel and arrange for vehicles for them.

The deployment of the BSF personnel, sources said, would begin soon after they have arrived.