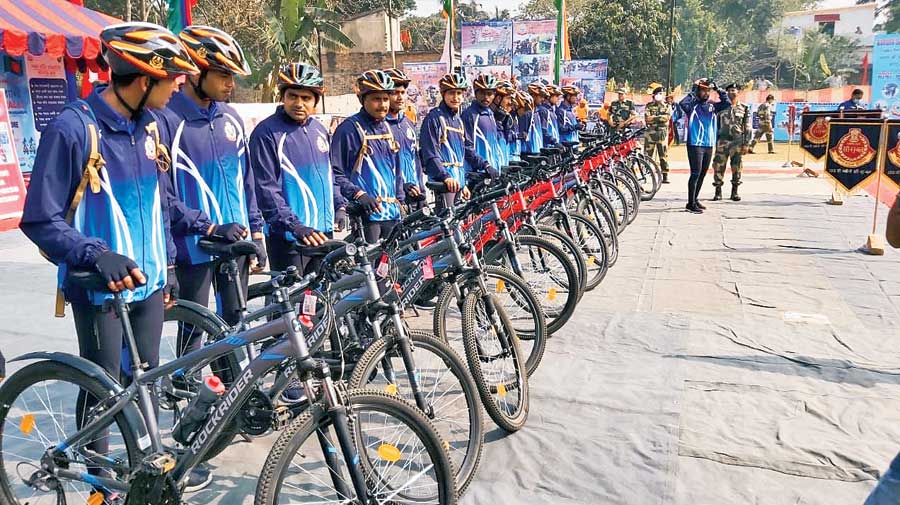 BSF on Sunday morning kicked off a 4,097km, 66-day bicycle rally with 13 jawans as a mark of respect to Bangabandhu Sheikh Mujibur Rahman for his birth anniversary on March 17, and for “better relations across the border”.

The Maitri (Friendship) Cycle Rally was flagged off at the Panitor border outpost near Basirhat in North 24-Parganas by former chief of army staff of Indian Army Shankar Roy Chowdhury to foster a “strong bond of friendship” between the custodians of borders of the two countries.

For 66 days, the 13 BSF jawans will cycle along border roads of Bengal, Assam, Tripura, Manipur and Meghalaya before ending the journey at Silkore border outpost in Mizoram on March 17 to coincide with the birth anniversary of Rahman, known in Bangladesh as the “Father of the Nation” or simply “Mujib”.

The cycle rally will cover around 90km each day with night halts at outposts along the international border.

“It is a tribute to the great statesman of Bangladesh by the BSF. He was a great friend of India and took initiative to develop a bond between the two countries,” said a BSF spokesperson. “So, for his birth anniversary we launched this Maitri rally to renew that bond and to create awareness among residents along the border on certain issues.”

“Apart from promoting the bond, the objective of this bicycle rally is to create a sense of security and awareness on crime and smuggling among the people along the border, while strengthening the bond of friendship with the BGB (Border Guard Bangladesh),” a BSF official said.

Rahman was the first President and later the Prime Minister of Bangladesh. He was assassinated on August 15, 1975.