British design to the rescue at fire-hit hospital

Most of the patients who were evacuated were back in the beds by around 3pm. The Intensive Coronary Care Unit (ICCU), too, was running 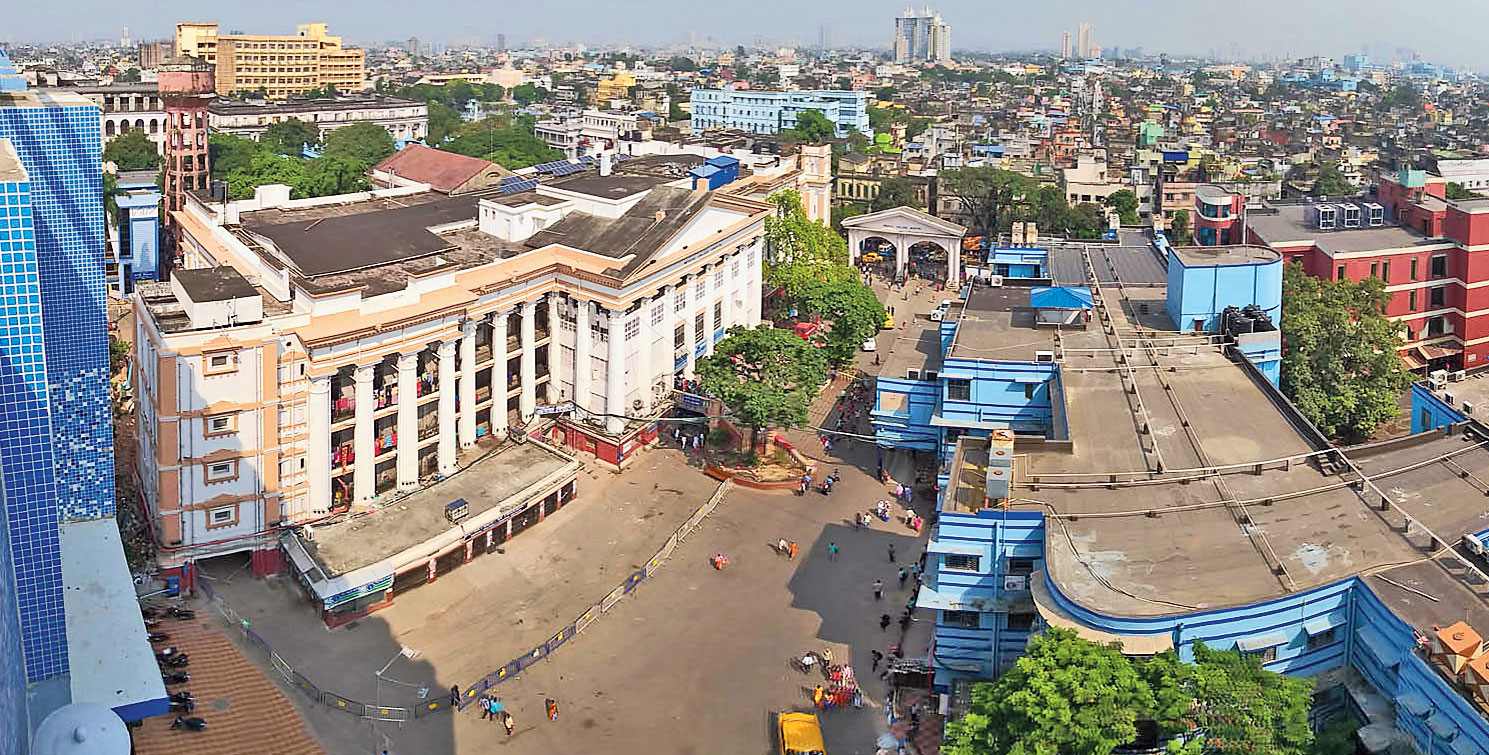 A bird’s-eye view of the Calcutta Medical College and Hospital from the terrace of the 11-storey hostel building on Friday.
Picture by Sanjoy Chattopadhyaya
Our Special Correspondent   |   Calcutta   |   Published 05.10.18, 10:23 PM

Large windows, high ceilings, doors opposite windows and wide corridors — all features of British architecture — acted as saviours during the fire at the Calcutta Medical College and Hospital on Wednesday.

The smoke that had filled the Medical College Hospital (MCH) building was able to find an easy exit because of the cross-ventilation provided by the British-era construction, senior fire services officials said.

Firefighters managed to restore operation in the building hours after the blaze broke out in a ground-floor pharmacy of the five-storey building around 7.30am.

Most of the patients who were evacuated were back in the beds by around 3pm. The Intensive Coronary Care Unit (ICCU), too, was running.

“The smoke travelled upwards and patients had to be evacuated. But no one was trapped in smoke. The ventilation system made the job of relatives and others who helped the patients out of the building easier. Our intervention was not required,” a fire brigade official said.

Patients, including those admitted to the intensive care units, had complained of discomfort as they had to find their way out through smoke- covered corridors and stairs.

“Though the patients complained of breathing trouble and burning eyes, the consequence was not as severe as it could have been. There was no casualty,” said another fire fighter who was present at the spot.

Architect Abin Chaudhuri agreed that the architecture of the building was what had helped restore normality in the fire-hit building in just a few hours.

“The building has high ceilings and large windows. The wide corridor without any obstruction also allowed smoke to exit smoothly. The roof vents are also much bigger than in modern constructions and that too played a key role,” Chaudhuri said. “All British-era buildings have wind-effect ventilation to ensure adequate air and light in the rooms.”

Fire brigade personnel said that, unlike in the rest of the building, the smoke remained trapped inside the the pharmacy, a later addition deviating from the original plan, for a long time because of its poor ventilation system. “We doused the flames but could not clear the smoke. We had

to demolish portions of the walls to allow the smoke to find an exit,” a fire brigade official said . The absence of ventilation created a thick layer of carbon.

Chaudhuri pointed out the modern construction can allow proper ventilation. “Now, creating usable space inside a building is first priority and ventilation is often ignored. There is no space through which air can flow freely. Even in an air-conditioned building, cross-ventilation should get priority,” he said.

Preliminary examination by forensic experts who visited the pharmacy store on Thursday indicated that an electrical short circuit in the computer’s central processing unit (CPU) might have triggered the fire.

The computer and the room where it was kept were gutted. Heaps of gauge and cotton were stored in the same, allowing the flames to spread quickly. Overhead cables were burnt.

The godown where medicines were stored was damaged.

Forensic experts sent samples of the CPU, cables and other articles to a laboratory for tests tests.

“We have identified the CPU as the seat of fire. There might have been other factors as well. That can be confirmed after the test reports come,” a forensic expert said.